resignation from the White House led to renewed concerns over a possible trade war and its impact on global growth.

Some investors saw Mr. Cohn’s resignation as a sign that President

was pushing forward with the steel and aluminum tariffs he announced last week and were worried that protectionist trade policies could spread. Mr. Trump will sign a proclamation to enact the tariffs this week, with “potential carveouts” for Mexico, Canada and possibly other countries, press secretary

Global trade disruptions could lead to ripple effects for a wide range of commodities and products, some investors fear, resulting in higher costs for companies and consumers and ultimately slower economic growth. The concerns about trade come after worries about higher interest rates sent the Dow industrials to their worst month in two years in February. 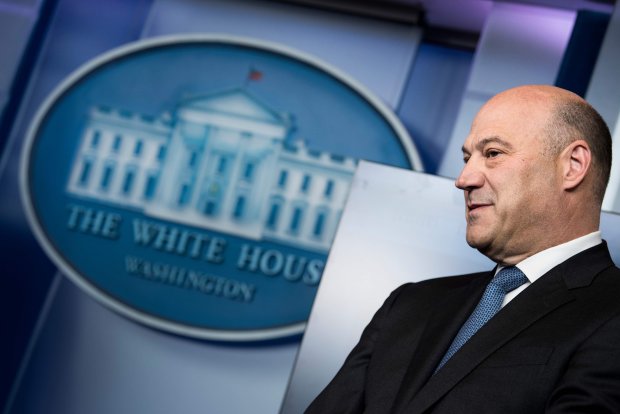 “We do think the aggregate risk to this more placid narrative has really gone up in recent months,” said Eric Freedman, chief investment officer for U.S. Bank Wealth Management. “Things like trade policy changes and the potential for a trade war—those are real issues that may alter the timeline of economic growth and stability.”

Stocks rose to start the week after prominent members of the Republican party pushed back against the tariffs, fueling bets that a widespread trade war was unlikely.

A number of companies and other countries have also voiced concerns about the tariffs in recent days, with full details still yet to be announced and uncertainty surrounding negotiations over the North American Free Trade Agreement.

The European Union on Wednesday urged Mr. Trump to rethink his planned tariffs, threatening to strike back unless the White House reverses course.

More on Gary Cohn and Tariffs

“You will have a disruption in growth if you get to the point where everybody is saying, ‘We have no other option but to hit back,’” said Dec Mullarkey, a managing director on the investment research team at Sun Life Investment Management.

Shares of industrial firms that would be most affected by higher commodity costs were among the worst performers Wednesday. Heavy machinery maker Caterpillar fell $2.24, or 1.5%, to $151.51, weighing on the Dow.

Some U.S. bank stocks also fell as markets fretted over Mr. Cohn’s departure and its implications for trade, the economy and regulation. JPMorgan Chase fell 43 cents, or 0.4%, to 114.73, while

Some investors said they expect the market to recover and the global economy to remain strong, as long as an all-out trade war is avoided.

“In general, it should be a good period [for markets], but it’s probably going to ping pong between these bouts of low volatility and great asset performance and short, sharp corrections that push people back on their heels when something crops up on the trade front” or elsewhere, said

Write to Riva Gold at riva.gold@wsj.com and Amrith Ramkumar at amrith.ramkumar@wsj.com