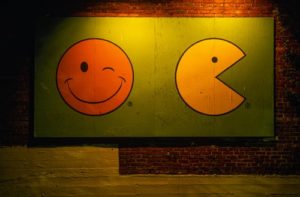 It was TECH Merger Monday… Stocks surged and closed higher as the new week began… Merger news lit the fuse… Oracle (ORCL) succeeded in winning the bid for the US division of TikTok – although that has a lot of hair on it – but in the end – it is a huge deal for ORCL as it puts them deeper and deeper into the ad space, Gilead Sciences (GILD) is buying Bio-Tech firm Immunomedics (IMMU) for $21 billion and Nvidia (NVDA) is buying the British chip designer firm ARM Holdings from Softbank for $33 bil (stock and cash) sending anything  tech into a bidding frenzy… ORCL + 4.3%, GILD + 2.2%, NVDA +5.8% Softbank +9%  and the Nasdaq up 1.8%… on the news… Jensen Huang – Nvidia’s CEO had this to say about the blockbuster deal

“It’s a company with reach that’s just unlike any company in the history of technology. We’re uniting Nvidia’s leading AI computing with Arm’s vast ecosystem.”

And this is for sure a deal changer in the industry and the world. It is about bringing artificial intelligence to anything and everything that we touch, carry, drive, use, or put in our pockets… Currently – ARM’s technology is in everything from manufacturing equipment to home electronics and is at the very core of the more than 1 billion smartphones sold every year. (that’s correct – the industry sells 1 billion smartphones every year…) But before you go and break the champagne bottle… this deal could take as long as 2 yrs to get done – as it needs regulatory approval from the US, the EU, the UK and China – China being the wild card considering the rising tensions between our two countries – But Huang has every confidence that he will succeed in getting Chinese approval – surely as long as he grants them the right to collect the data… I mean – what’s the difference – at this point everyone is collecting data on everyone…

Futures, which were higher in the pre-market, continued to surge after the opening bell rang at 11 Wall St… taking tech and the rest of the market well into positive territory… Not one sector was RED – by the end of the day the Dow advanced by 367 pts or 1.1%, the S&P surged 42 pts or 1.2%, the Nasdaq rose 203 pts or 1.8% and the Russell was the hit of the party – rising 40 pts or 2.6%. The concerns that have caused investors to become a bit more cautious appeared to be in the back seat yesterday… but remember – all of the issues and concerns that caused the pullback are alive and well… the resurging virus around the world, the race for a vaccine, the rising tensions between US and China, the election, earnings, the economy, unemployment, the lack of another stimulus plan, etc. have not gone away at all… so my expectation is that the recent volatility is not over yet… and I continue to believe that the most important issue for investors in the next two months will be the election… because a contested election – which is well within the range of possibilities – is the expectation… and that will surely cause volatility in the weeks ahead… Just sayin’ – Now is not the time to be complacent…

On the virus front – news that AstraZeneca resumed the clinical trial of the Covid vaccine in the UK was a positive for the Bio-Tech industry – but understand that those trials in other countries remain on hold – including in the US.

And car maker Nikola (NKLA) remains under fire… as the Hindenburg Research report calling out Trevor Milton – NKLA CEO and the company as an ‘intricate fraud built on dozens of lies’… sending this stock down 20% thru yesterday and is down another 6% this morning…  Trevor is fighting back hard so expect to see this in the news for a while… the SEC has now made it clear that they are taking an active interest in the report and the accusations at the request of NKLA management. This feels like it has all the pieces of an epic story – stay tuned…

Today begins the two day FED meeting – and while no change in rates is expected – investors will be listening for anything that may give them a clue to any change of heart in the minds of the committee… remember that he is also expected to re-affirm his new commitment to a more ‘relaxed’ outlook for inflation… so expect that to be one of the topics of conversation during tomorrow’s press conference… as journalists will try to pin him down on exactly what that definition is… How far is he going to allow inflation to rise before the FED steps in?  2%, 2.25%? 2.5%? (Now look – 2% has always been the rate at which the FED would begin to raise rates… but now Fed Chair Powell has indicated that that may not be the case any longer…so what is it?  Can he actually define it or is it dependent on a range of other issues? I mean can it be so black and white or is it more gray?)

Citibank is resuming ‘layoffs’ – joining other big banks in ending those pledges to halt the layoffs during the pandemic… and they are about to get their wrist slapped over lax risk management systems – (Welcome to the club Janey). Amazon is hiring 100,000 new employees ahead of the holiday shopping season, Gold is poised to go higher as the Turks pile in as the Turkish financial system comes unglued, Apple is set to host its ‘Time Flies’ all virtual event- unveiling its latest version of the iWatch and updated version of the iPad – the annual Apple event unveiling the latest and newest iPhone is set for later in the fall… and there are some analysts out there that suggest that any lack of news of new 5G capabilities will be a negative… that’s ok… let them sell it off more – the stock is off 20% since the September swoon… back up the truck – capisce? Apple isn’t going anywhere…

Overnight – Retail sales rose 0.5% in China, Industrial Production grew by 5,6% while fixed asset investment declined by 0.3% during the first 8 months of the year. In addition, the RBA (Reserve Bank of Australia) released its latest minutes from the September meeting saying that

“The downturn had not been as severe as earlier expected and a recovery was under way in most of Australia.”

European markets are all higher in early trade… the focus is on the FED, the BoE (Bank of England) and the BoJ (Bank of Japan) all due to announce policy decisions beginning tomorrow and going thru Thursday. And while no change is expected – there is always a chance that someone says something that was not expected and that can cause the tone to change… In addition – Europeans are reacting to the latest Chinese macro data and that is helping the mood. As of 7 am – the FTSE is +0.90%, CAC 40 +0.33%, DAX +0.24%, EUROSTOXX +0.58%, SPAIN +1.4% and ITALY +0.80%.

US futures are up again following in yesterday’s footsteps… the excitement over TECH and what some view as movement on the virus is causing the surge. In addition – it appears legislators in DC are trying hard to come to an agreement on stimulus although some still think they are too far apart… but in any event – they are talking and that is being taken as a good sign. Analysts around the street are raising year end targets for the S&P and that is also helping the investing psyche. As of 7 am – Dow futures are up 186 pts, the S&P up 25 pts, the Nasdaq up 110 pts and the Russell is up 10 pts.

Oil is up 65 cts at $37.95… the IEA (Int’l Energy Assoc) did cut its 2020 outlook by 200k bpd but that is not new news… the industry and OPEC have done the same in recent days, so this is just them playing catch up to the industry. OPEC meets on Thursday… will they announce more cuts or more strict compliance to current levels?  We are about to find out… Hurricane Sally – which is hitting the coast has also shut down rigs and refineries in the Gulf. China’s oil import rose in August vs one year ago and is now the second highest on record – and the world is still not fully open yet… Capisce?

This morning the S&P is now at 3383 after testing 3403 yesterday… and with futures up again today – we are sure to see the S&P test 3400 again… but it feels like that’s a cap for now… so let’s see. Any movement in DC will be a positive and certainly any new news on a vaccine or the state of the virus will also send stocks higher… On the election front – we are now about 10 days out from the first Presidential debate… which is sure to be well watched as both sides appeal to Americans to get out and vote. I would not be chasing names here; patience is a virtue. 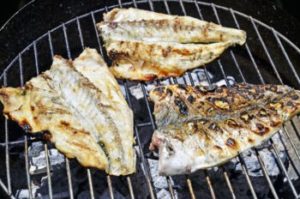 Before we kiss summer 2020 good bye – try this very simple yet delicious dish.

Combine oil, lemon juice, oregano, garlic, and pepper in a large shallow bowl. Add fish to marinade, and flip to coat both sides.  Cover with saran wrap, and place in the refrigerator 45 minutes.

Heat the grill – to med high.  Take the striped bass out of the fridge and remove from the marinade, place it on the grill, skin side down, and season with salt. Grill until skin is lightly browned and starting to crisp.  Using a spatula – Carefully turn fillets and cook through until the center is opaque – no more than 5 to 6 minutes.

Serve with rice pilaf and sautéed spinach (garlic and oil, s&p). Decorate with the chives and lemon wedges.