Stocks remain confused – falling again on Friday as the weekend approached and covid19 cases continued to surge around the world. Germany and France going into various stages of lockdown, talk of the UK considering a total lockdown and questions around what the US will do to combat the recent surge across the country remain front and center. And then the countdown to the election entered its final phase… talk of a statistical tie one moment turned to talk of a Biden win across the country and more importantly in the swing states… leaving Donny to remind us that he does not intend to leave without a fight – so get ready for a contested election that will play out (potentially) for weeks

Across the board, weakness in the big tech names didn’t help either…and while we saw historic earnings reports from the Big Boys on Thursday evening – it was not enough to overcome the building concern over what’s next for the country. The Nasdaq got smashed falling 2.45% on Friday – as the tech names were priced to perfection going into the reports so then what are you supposed to do when they report blowout numbers? Buy more or ring the cash register and take some money off the table…? Well – taking money off the table was the theme of the day… and while there were plenty of buyers – they chose to bid lower leaving a void in demand causing the sellers to ‘panic a bit’ sending stocks lower. Remember – when the market gets antsy – the path of least resistance is usually lower.

Eco data on Friday saw better results in Personal Income & Spending, the Chicago PMI and in the U of Michigan Sentiment survey – but none of that appeared to make a difference – as stocks weakened leaving the Dow down 157 pts, the S&P off by 40 pts the Nasdaq lower by 274 pts and the Russell 2000 off by 23 pts…

As discussed, volatility has surged – up 55% in the past 12 days – causing investors to become more cautious… which means prices have weakened and weakened substantially… In that same time period the Dow lost 9%, the S&P is off by 7%, the Nasdaq has given back 9% and the Russell 2000 is off by 7.5%. As the month ended – investors appear to be concerned that we are about to have an ‘instant replay’ of the February/March market action that saw the indexes get clobbered leaving many to sit this one out before making the next decision.

And then there is all this talk of mail-in ballots, the post office, and what to do with ballots received after the election causing Supreme court decisions that differ from one state to the other raising all kinds of concerns – now you would think this is a non-issue, right? That the country has a blanket ruleset – but you would be wrong… States do not have the same rulesets when it comes to vote counting in a national election – which is just another conversation that needs to take place… California for instance allows a mail in ballot that is received 17 days AFTER the election to be counted IF it is postmarked by November 3rd, while some of the swing states like Wisconsin, Florida etc… need to receive the ballot by November 3rd in order to be counted… and as you might imagine other states have other rules – like when do we start counting all of those mail-in ballots? Before, day of or day after? And then what does that do to the integrity of the process? Which leads us to ask – Why? Why are the rulesets NOT the same across the board for a national election? Individual state elections – go for it, do what you want but the national Presidential election?  “Come on, Man” … The election is always the first Tuesday of November – there is no ambiguity. And with so many ways to vote – absentee, mail in, early in person and on election day and with the push on to register to vote on for 12 months now and still going strong – the question remains – why do people find it so difficult to cast your ballot? I mean – is November 3rd the date or not? You could have requested a Mail-in ballot months ago and if you DIDN’T – then whose fault is that? Why is this always so difficult… we are not in a 3rd world country. So many questions and NOT enough answers… which is why so many people feel like elections are always suspect… I mean half the country is still fighting about the 2016 results…

Ok – over the weekend we did learn that the UK announced a second ‘national lockdown’ – non-essential business are all closed and citizens are demanded to shelter in place UNLESS you have a specific reason to be outside… and you better have a good reason… there is still some ambiguity over what the rest of the region will do and then what Joey will do if he is elected – speculation that he is considering a total lockdown once again surfacing on the Sunday news programs as “Mayor Pete” said that ‘everything has to be considered’. Oh boy… here we go…

It’s Monday, November 2nd, Eco data today includes Markit US Manf. PMI – exp of 53.3, ISM Manf. – exp of 55.8, ISM New Orders – exp of 62 and Construction Spending m/m of 1% – all of these reports are important, Earnings continue to hit the tape and this is another big week… and if the eco data and the earnings come in as expected it will be bullish for the economy and the market – but will the market be listening or not? Turn on any TV station today and tomorrow – and all you will see and hear about is the election… so sit back – do not make any investment decisions based on the rhetoric… We need to understand future policy and economic fundamentals in order to build a stable and well diversified portfolio… and those two issues will be different depending on who takes the Oval Office and the Senate. The House expected to remain in Democratic control – so no issue there.

US futures are UP… the Dow is +435 pts, the S&P’s are ahead by 50 pts, the Nasdaq is adding on 145 pts and the Russell is adding 28 pts. This as the UK, Germany and France went into lockdown mode… On Sunday evening – the Trafalgar Group – a widely watched and respected political and corporate market research polling group is now predicting that Trump will win – 322 electoral college votes vs. Biden’s 216 count. This is in concert with the latest IBD poll (another well respected news/ polling group) that is also predicting a Trump win… So is the market rallying on that news? We are about to find out… Now to be fair – the NBC/Wall St Journal poll is predicting a Biden win leaving the Senate up for grabs… and that can in fact be the most important factor in this election… what happens in the Senate can change the direction of the country for decades. So, is the market rally today about politics or just about the broader market being in a short-term oversold position….?

If tomorrow is a big landslide in either direction, then the argument should be over… but I suspect that won’t be the case… so strap in. Either way, we should all prepare for the ongoing contest and the ongoing fight. In any event – talk of the next stimulus package will come to the top again and depending on who wins will determine the size and extent of that program… The GOP with a $2 handle package while the DEMS will surely have a $3 handle package…

European markets are all up… following the positive reaction in Asia. The most recent lockdowns across the continent seemingly having little effect on the markets (today) – but expect that to change on a dime. The media is saying that the action is centered around the US election – so what does the rally suggest then? Is it suggesting a Trump win or a Biden win? At 6:15 am – the FTSE is +0.93%, CAC 40 +1.64%, DAX + 1.8%, EUROSTOXX +1.39%, SPAIN +1.43% and ITALY +1.48%

Eco data includes Markit and ISM Manufacturing PMI’s – both reports suggest 53.3 and 55.8 respectively… leaving both of those reports well into expansion mode and that is bullish…

Oil continues to get slammed… falling overnight as word of the latest European lockdown hits the tape WTI (West Texas Intermediate) falling by $1.24 or 3.5% – taking us back to the May levels of $34.84… after testing as low as $33.64 overnight. The weakness is now being baked in as the media is suggesting that the lockdown in Europe will lead to a massive decrease in demand and that a potential new lockdown in the US will exacerbate any move lower. Remember – the scientists all think we are 3 weeks behind Europe… so by Thanksgiving we could be in a whole new dynamic… and that will continue to weigh on markets in general and expect that the bears will jump all over this. As the angst builds – expect the path of least resistance to be lower… $30 is now in sight… and that will be good for gasoline prices!

The S&P closed at 3269 down 40 pts after having tested 3233. Futures are in rally mode – if they hold then the S&P should open above 3300 and most likely run into resistance at 3307 where it will hit the intermediate trendline. On the downside – the long term trendline is at 3129  or 4% lower from here… a Democratic sweep could easily see the market test this level as investors re-price the risk initially before rallying once it becomes clear what the cabinet and policy initiatives will look like and what the size of the expected stimulus package will be… again expect a $3 trillion handle on a DEM proposal. A Biden win and GOP hold on the senate could see the market rally as there will be a system of checks and balances on the executive branch and the size of a stimulus package will be more like a $2 trillion handle. In any event – we will begin to understand by tomorrow evening at 9 or 10 pm… so sit tight. 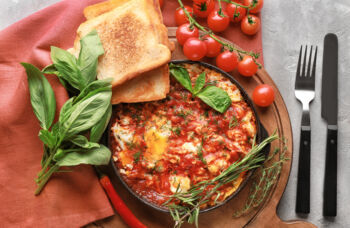 This is a classic peasant dish that originated in Sicily… Today you can find this dish made with artichokes & potatoes or broccolini and onions… either way, you can take the classic version and make it your own. If you add in the extra’s you must sauté them first in a bit of oil and set aside. You would add them back into the sauce when you break the eggs. For this you need:

Fresh marinara sauce – basic… olive oil, onions, garlic, plum tomatoes, fresh basil, s&p and a pinch of sugar… Sauté the garlic and then add the chopped/diced onions… cook for 15 mins or so… now add the crushed plum tomatoes, season with s&p, fresh basil and a pinch of sugar – bring to a boil and then turn down to simmer… cover and let simmer for 30 mins or so… This is just a very basic marinara – I also add grated carrots and celery at the beginning and allow them to melt into the sauce. But you can do as you wish…

Now you need a loaf of fresh Italian bread and Eggs.

After you make the Marinara sauce – transfer some into a shallow frying pan… turn heat to med and now crack open some eggs… drop them in the sauce – whole – as if you are poaching… with a spoon – move the sauce over the eggs so that they cook – do NOT let the yolk get hard… you want the whites to cook and the yolk to remain soft… transfer to a plate, cover with more marinara and serve with the fresh bread…