BaBa Booooom! Stocks EXPLODED and IMPLODED – Dow adds 843 pts or 2.9%, S&P gained 41 pts or 1.17%, and the Russell ended the day up 60 pts or 3.7% all surge, while Nasdaq fell 181 pts or 1.5%… Now this looks like nothing exciting – but understand that the Dow, S&P and Russell indexes were all up by nearly 5% at some point during the day while the Nasdaq struggled… and then the broader market came under late day pressure as the Nasdaq struggled paring some of those gains… Investors dumped the expensive and somewhat overvalued tech names and piled into cyclical and small/mid-caps that are primed to benefit from the economic recovery.

…It was a day to remember… ignited by the news over the weekend that the media made the call and announced that J&K (Joey and Kamala) won the election (fair and square) and while that was enough to get global markets excited, it was the 8 am headline that hit the tape and then lit the place on fire! PFE/BioNTech announced that their vaccine showed an ‘early analysis’ of a more than 90% efficacy rate in protecting against the 2020 plague (aka covid19) and this is a ‘much better than expected or anticipated’ result and in fact marks a milestone in a search for a cure… Investors went wild, algo’s went into a frenzy, analysts were caught off-guard and traders had a field day! It was so exciting it led some to ask – When did PFE know this information? Was it just revealed to the scientists over the weekend or did they know this last week? (the answers span the spectrum… as you might imagine…) And so on the same day that Joey announces his ‘Covid19 Dream Team’, PFE announces a breakthrough in the fight for a cure… OK! Now, let’s remain positive and consider what it means for the markets, your money and the workplace.

The news was great! Great for America, Great for Europe, Great for Asia, Great for the world… Monday had already come and gone for Asian investors – so they missed out – but the sun was in the middle of the sky over Europe and just rising over the Atlantic on the east coast, European markets were higher, and US futures were playing ‘follow the leader’ – celebrating (what they think) was finality to the US election – but remember, it is not over yet… Trump won’t concede (although that is not a game changer) and the two Georgia Senate seats – which are in GOP control – are up for grabs and that could still change the make-up of the executive branch (and that is a game changer)… but we can come back to that. And then it happens… the news hits the tape and suddenly European markets rocketed higher so fast that they left the rubber on the road – by the end of the day – the Eurostoxx added 6.3%, Spain was up 8.5% and France was up more than 7.5%… while the other markets followed suit.

In America – we didn’t look back… in fact all of the press that J&K (Joey and Kamala) thought they were getting was lost on the PFE news… in fact – Joey had to call up the media and say – “Hey, someone pay attention to me…! Do you know who I am? I have some things to discuss…”

Stocks went wild and suddenly everyone is a buyer… (think herd mentality) which is not unexpected… Sell side inventory suddenly cancelled leaving huge voids in supply causing the buyers (think algos) to go into ‘Panic Buy Mode’ but it is what it is… Every scientist and doctor that took to the TV rang the bell… praising the results… I only heard one or two say that  we need to slow down and analyze these results, we need to understand what the trial demo was, who was in it, equally divided between men and women, children and adults, young adults and older adults, etc… we need to have ALL of the information, it needs to be transparent, we need to understand any and all of the issues… and while we think we do – we may not… and I am not throwing cold water on this party – I am just saying that there is still much to learn… but in any event… on the face of it – It looks very positive and THAT is good news for the world and the human psyche. Then toss in the expected good news that should come in the next few weeks from Moderna, Gilead, Regeneron, JNJ, etc… and you have a recipe for a bull market rally. In the end – any vaccine that is going to end any discussion of regional or national lockdowns in this country and around the world… is good… Any vaccine that appears to allow us to get back to normal is welcomed news… for some!

In the end – it was the vaccine news and the freedom that a vaccine means that drove the markets yesterday… but remember – there are still issues to address. Mainly – what the Senate will look like as of January 6th, How big of a stimulus package are we are going to get, What is the next FED move? What part of the platform rises to the top (think regulation and taxes), Who is in his cabinet, who is whispering in his ear, who is driving policy decisions and What will trade with China and the world look like?

This morning – US futures are ‘confused’ the Dow is up 146 pts, while the S&P is -9 pts, the Nasdaq is lower by 190 pts and the Russell is ahead by 33 pts. Apparently the whole ‘big tech’ game is continuing to re-price based on the latest vaccine information… and that should not be a surprise… those names were priced to perfection as if we were never going to escape from this madness… and that we would all be stuck at home for years to come. Now that does NOT mean that there is not an investment case for tech – Of course there is… but it does mean that the market needs to re-price it for what it is now vs. what it thought it was last week and before the very positive PFE announcement… so don’t despair – after dramatic moves like yesterday – it is better to sit back and let the markets settle in for 2 or 3 days… when cooler heads typically prevail… Also – expect to see some profit taking from the day traders after some of those dramatic moves up and expect to see some ‘online shopping’ in names that got punished.

European markets are up small… as investors there digest the surge yesterday… and they are churning waiting to see what happens next in the US markets.

Oil  is up again… all reports suggesting that a viable vaccine is a GAME CHANGER is the root of the move… and yes, while  a Biden win with a split congress… is the best outcome for the US – a vaccine is what is good for oil and trade and ‘moving things around’ (think planes, trains, trucks and autos – all vehicles that use oil…).

The S&P closed at 3550 yesterday after testing as high as 3645! …but as noted above – this story is not over… and it appears that now we will have to wait until January 5th before we understand which way the Senate falls… the country has a new President Elect, the world has a possible answer to covid19, countries and states continue to be in lockdown mode, and Trump refuses to play nice in the sandbox… (oh boy, how’d I love to be a fly on the wall in the WH)… In any event – do not be surprised to see a bit of a turnaround in the tone after the surge yesterday, but that is not a declaration of anything negative, it’s just digestion as investors react to the latest vaccine news. I would not be surprised to see the S&P come back to fill the gap it created yesterday… in any event – stick to the plan and call you advisor if you have questions. 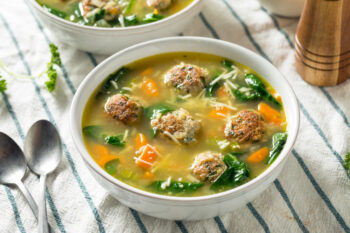 This is a great soup to make for any occasion but works very well with Thanksgiving. This soup is full of veggies and tiny veal meatballs and is a family favorite.

For this you will need:

For the meatballs, place the ground veal, bread crumbs, garlic, parsley, Pecorino, Parmesan, milk, egg, s&p  in a bowl and combine.   With a teaspoon, drop 1 to 1 1/4-inch meatballs onto a sheet pan lined with parchment paper. (You should have about 40 meatballs. They don’t have to be perfectly round.) Bake for 30 minutes, until cooked and lightly browned. Set aside.

In the meantime, for the soup, heat the olive oil over medium-low heat in a large heavy-bottomed soup pot. Add the onion, carrots, and celery and sauté until softened, 5 to 6 minutes, stirring occasionally.

Add the chicken stock and wine and bring to a boil. Add the pasta to the simmering broth and cook for 6 to 8 minutes, until the pasta is aldente.

Next – add the meatballs to the soup and simmer for 1 minute. Taste for s&p. Stir in the fresh spinach and cook for 1 minute, until the spinach is just wilted. Ladle into soup bowls and sprinkle each serving with extra grated Parmesan. A nice piece of garlic bread on the bottom of the bowl is always a favorite.