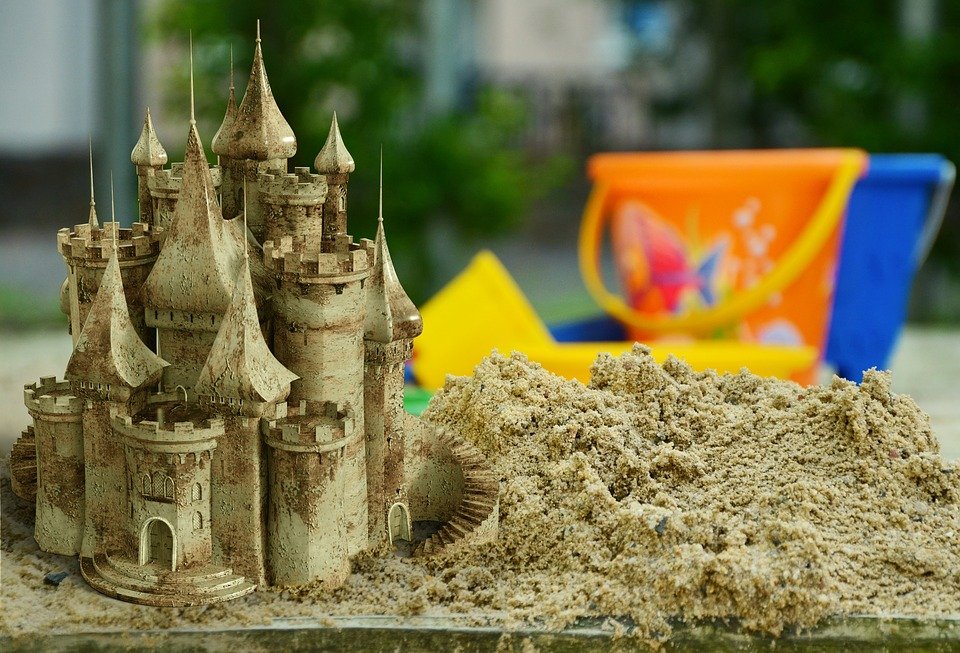 Investors loved the headline……Mitchy and Chucky get all cozy as Mitchy offered an olive branch…. offering to suspend the debt ceiling for two more months – thereby preventing that ‘catastrophic’ default that they have all been screaming about and giving the Democrats time to figure out what’s next.

Stocks ended the day higher…but not ON their highs as concerns over the US debt ceiling eased – but stocks backed off a bit when more GOP Senators expressed frustration with Mitchy, and China announced that they plan on tightening their grip on technology companies – even more than they already do…. but still it was an overall good day.  In then end – a temporary deal should help calm markets because it takes just one of the many issues off the table for now…. Just fyi – this deal expires on December 3rd – so mark your calendars.

Now while I believe that there was never going to be a default at all – I will say that the Dems did a good job of creating an ‘Armageddon like’ atmosphere…..and that was topped off when the Joey took to the podium on Wednesday to tell us that our “retirement savings would be wiped out”  and Janet used words like ‘catastrophe, disaster, fiasco, devastation’ – a bit dramatic don’t you think – I’m surprised she didn’t use ‘cataclysmic’.  In any event there wasn’t ever any real danger at all… but Washington IS all about the drama. I would though, like to know whose idea it was to have him say that – because I also must believe that he knows that that was NOT true at all – when you think of countries defaulting you think of Venezuela, Argentina, and Russia – and a host of others – you do NOT think of the US and for good reason – because it would NEVER happen.

Look – if we didn’t lose everything during the most recent REAL Armageddon in the markets – the GFC (Great Financial Crisis) of 2007-2009 that enveloped the globe – then this supposed debt crisis is nothing but a pimple on your a.! Remember it took 2 yrs. for the market to lose 60% of its value – not 2 days…. just putting it in perspective.

Here is the link to my appearance with Charles Payne on Fox Business yesterday where we discussed this very issue.

Eco data was a bit better than expected but that did little to add to the excitement.  Speculation over what today’s NFP report is going to show is what investors are waiting for now.  My sense is that we will get a stronger number than expected – just like we saw with ADP on Wednesday…..partly because the September number was so weak…..Unemployment is expected to drop to 5.1% Average hourly earnings will be up and the underemployment number should approach 8%….Overall it should be a bit of a warmer number but not so hot that it causes the FED to reposition itself yet again…

Every sector except Utilities – XLU -0.5% ended the day stronger….Consumer Discretionary – XLY led the way up gaining 1.6%….and that is curious because that speaks to the health of the consumer directly – names like Bloomies, Nordstrom’s, Tiffany’s, Michael Kor and Jared …because discretionary purchases are just discretionary….they are not Consumer Staples – XLP which gained only 0.4%….think toothpaste, soaps, diapers, paper towels, aspirin, shampoo, starch for your shirts, Q-tips, cereals and oatmeal etc.. You get the picture, right?  PG, CL, K, TJ Maxx, Kohl’s to name just a few. Healthcare – XLV and Basic Materials gained 1.3%, Tech – XLK gained 0.9%, Industrials – XLI up 0.8%, Financials – XLF up 0.6% and Energy up 0.7%.

The 10 yr. Treasury ended the day yielding 1.58% which was up and is approaching 1.6% – which also means it is approaching the February highs of 1.77%….and that should prove to offer some resistance at least temporarily for stocks. Remember the bet is that yields will end the year at 1.8%.    The VIX fell by 7%, Gold fell by $4, and Oil gained 70 cts to end the day at $79 again and this morning it is trading right there. In the end – everyone breathed a sigh of relief.

This morning we wake up to more excitement……China re-opened after having been closed since Monday for the Golden Week Holiday….and stocks advanced by 1.3% as they played catch up…. Chinese PMI data did rise to 53.4 up from 46.7 – a spectacular rise in that data point putting China back in expansion mode… (recall sub 50 means you are in contraction mode – not good).  Apparently, no one in China appears to be concerned about Evergrande or the Chinese property developers that are choking under massive debt…. In fact – I don’t think anyone has even talked about Evergrande in more than a week – and they have now missed at least 3 bond payments…. So much for that ‘Lehman type moment’ that really would wipe out retirement savings.

In Europe – markets are lower…after the back-and-forth action all week – that saw Monday down, Tuesday up, Wednesday flat, Thursday up and now Friday down all this as investors in that region await our Non-Farm Payroll report today.  And in other news – Ireland – that has been a hold out to reforming the global corporate tax rules has now decided to join in the fun…. agreeing to let go of its 12.5% tax rate and opt for the 15% rate that 140 other countries have agreed to just as all these nations are meeting today.  In the end it is a way of taxing big international companies so that everyone gets their ‘fair share’.  If they all sign this document today it would represent the most sweeping changes to international taxation in over 100 yrs. and if successful, the new plan would begin 2023.  In economic news – Germany’s trade balance for August came in at 13 billion euros vs. the estimate of 15.8 billion euros.  While that sounds important – it is doing absolutely nothing for today’s tone…. At 5:30 am – markets across the region are flat to down 0.5%.

And US futures?  Well – there are no fireworks right now…futures are essentially flat – they are down – but not anything to write home about.  Dow futures down 34 pts, the S&Ps off 6, the Nasdaq down 44 and the Russell down 2.

The story remains the same…. investors are waiting on the NFP report due out at 8:30 am…that report should offer more clarity on what investors think the FED will do at the November meeting which in one month away…. (November 2nd and 3rd to be exact.) In addition – we have the official start of earnings season next week when the big banks kick it off…JPM, C, WFC, GS, MS, and BLK.  Now while BLK is not a bank – they are a massive global money manager with more than $9 trillion of assets under management – I suspect that on the call next week they will report an increase in aum that will take them over the $10 trillion mark.

Now if today’s report is very strong (hot) then expect the tapering conversations to gain steam, if it is ‘warm’ then the FED could go either way and if its ‘cold’ meaning another weak report then that will give Jay Powell cover to do nothing and keep buying $120 billion in bonds every month.

And just for fun – Jay is up for re-appointment and there is some question about his tenure….we know that Lizzy Warren has already made it clear that he is a ‘dangerous man’ (her words not mine) and will not support his re-appointment – So we must ask – Will that cause the next uproar in the financial markets…or is that just her way of making noise and stamping her feet – the way so many elected officials do to get their way?  It is going to be interesting to see what we must ‘give her’ to get her support – the way I’d like to know what the Dems gave the GOP last night to get them to come to the other side of the fence as well. Don’t kid yourself – someone got something…. they always do.  I guess you must ask – what will Manchin and Sinema get to fall in line?

The S&P ended the day at 4399…. after trading as high as 4429…. ending solidly above the trendline at 4355.   Today will be key to watch. What will investors glean from the NFP report?   Will we move significantly higher or just churn right here?  Futures action and European moves do not suggest anything dramatic just yet…but it is still dark outside…. the sun is still making its way across the Atlantic as the gov’t readies to unleash today’s economic data.   My gut tells me that the number will be ‘warm’ and that should help stabilize markets…as it feels like everyone is getting more comfortable with the start of tapering…. NOT the start of rising rates, but the start of tapering – and Jay has made it very clear that they are two mutually exclusive events.  If investors do not believe that – then watch as the market reprices…. but I don’t think that happens today.

I do not expect the recent volatility to subside anytime soon….and expect more turbulence in the weeks ahead…. Remember during earnings season – the devil will be in the details – future guidance, input prices, rising dollar, supply chain issues, and how future FED policy may help or harm all these projections – so stay close to your desk….

You can follow me on Twitter @kennypolcari and on IG @kennyp1961.
You can also find my daily videos on my YouTube channel – Kennypolcarimedia – My URL address here:  https://www.youtube.com/user/kennypolcarimedia

Bring a pot of salted water to a rolling boil. Then turn to simmer until you need it.

In another pot — start with cubed butternut squash – place 2/3 of it in a pot of chicken stock, some crushed garlic, & a stick of butter – careful not to add salt as the stock will be salty enough.   -add enough stock to cover the squash (as this becomes the sauce for the pasta).  You want the squash bathing in the liquid.

Boil until the squash is soft – when done – use a masher (or one of those handheld puree utensils) to mash the squash….once done it should be nice and thick – add the remaining 1/3 of squash and simmer for 15/20 mins…making sure that the new cubed pieces have time to cook and soften….this way – you get a thick sauce with chunks of squash for the pasta……Turn the heat off and add a handful or two of shredded parmegiana cheese and mix well.

Add the pasta to the pot of water and cook for 8 /10 mins or until aldente.  Strain pasta – always reserving a mugful of the pasta water to re-moisten the pasta…. return to pot – add back a bit of the water and stir….do not make it watery – just a bit moist…. now mix with the butternut squash – Serve immediately in warmed bowls and garnish with a bit more of the Parmegiana.  always supplying additional cheese for your guests if they so desire.