Goldman Sachs CEO: Odds of a ‘bad outcome’ for economy have gone up – fox2now.com 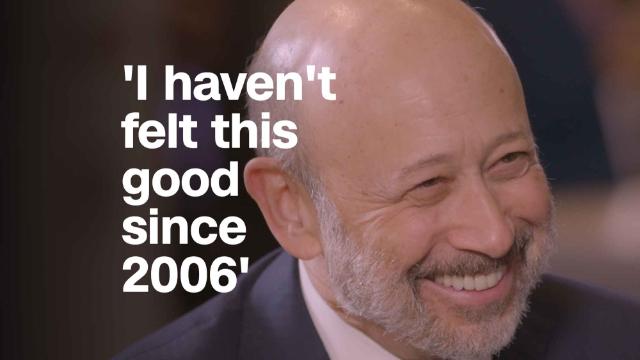 Lloyd Blankfein is worried that a spending spree by the Trump administration could overheat the American economy.

“The odds of a bad outcome have gone up,” the Goldman Sachs CEO told CNN’s Christine Romans in an interview airing Wednesday.

Blankfein noted that the economy was already humming along before the federal government juiced it with $1.5 trillion in tax cuts and $300 billion of additional spending, pushing up the budget deficit. And now, President Trump has proposed a $200 billion infrastructure package.

That kind of spending is normally reserved for recessions — or at least fragile recoveries — not booms.

While it’s not his “base case,” Blankfein said the risk is that all that stimulus could be “too much of a good thing” for the economy and financial markets.

“Don’t forget, all of these deficits have to be paid for,” he said on the sidelines of Goldman’s 10,000 Small Businesses Summit.

Wall Street loudly celebrated after Trump and the Republican-controlled Congress delivered major tax cuts in December. At one point last month, the Dow was up 45% from the level it was at when Trump won the election. The index jumped 1,000 points in the space of just seven trading days in January.

Optimism is also on the rise among smaller companies. A recent survey by the National Federation of Independent Businesses found that owners of small firms say this is the best time in decades to expand.

For Blankfein, who became Goldman CEO nearly 12 years ago, the current upbeat mood is laced with memories of the heady days that preceded the global financial crisis.

“What could possibly go wrong? I haven’t felt this good since 2006,” he joked.

Investors have begun to worry about a potential hangover. Fears that inflation will force the Federal Reserve to end the party by aggressively raising interest rates sent the Dow plunging 1,300 points, or 5.2%, last week. It was the index’s biggest weekly drop in two years.

“If the economy starts to overheat, and the Fed feels that it’s behind” on inflation, it will need to act, Blankfein said.

Concerns about runaway inflation forced the Fed to scramble in 1994 by dramatically raising rates more than Wall Street anticipated.

“I remember 1994,” Blankfein said. “That’s possible, too. That would be quite jarring to the economy.”

Heavy selling has already lifted the 10-year Treasury yield from 2.4% at the start of 2018 to around 2.85% today. That’s critical because Treasuries help set the price for virtually every other asset. Higher returns for U.S. government debt, which is seen as an ultra-safe investment, could hurt demand for riskier assets like stocks.

While Treasury yields remain historically low, they are climbing. That’s down to a variety of reasons, including the stronger economy, more inflation and concerns about rising deficits that could reach $1 trillion in fiscal 2019.

Washington’s spending binge will force the Treasury to borrow more by issuing more bonds. Those bonds will need to be sold at the same time that the Fed is winding down its past stimulus efforts, which were known as quantitative easing (QE), by offloading vast amounts of Treasury notes.

“They have a competitor: the central bank,” Blankfein said. “They’re going to sell into the same kind of market to the same investors.”

To be clear, Blankfein isn’t predicting disaster. He noted that interest rates remain relatively low and said his “base case” is that the economy will stay broadly on track.

“I wouldn’t throw all in,” Blankfein said. “With the Fed raising rates, with the withdrawal of QE, with the budget deficit widening out, I wouldn’t say this is the time I would max out on my risk.”