General Motors Co. and the United Auto Workers remain divided over several issues as 46,000 strikers continue to head to picket lines for the fourth week — and Gov. Gretchen Whitmer is growing concerned.

The Michigan economy is getting increasingly impacted as the strike lengthens into its fourth week, hitting striking workers, laid-off employees at other affected companies and spreading deeper into the automobile supply chain.

“I’m very concerned about it,” the governor said Monday, the same day she visited workers on the picket lines at GM’s Delta Township Assembly plant. “These things are important, that they try to remedy them and find some common ground as quickly as possible.”

In Michigan, 17,000 UAW members are on strike against GM. As of Sept. 30, the state’s Unemployment Insurance Agency had 3,500 claims from automotive supplier employees — more than any other state affected by the GM work stoppage.

Poised to enter its 23rd day, the walkout is the longest national strike of an automaker in decades. As the impact of the strike by UAW-GM members at 55 GM facilities in 19 states is beginning to be felt on a national level through layoffs and work stoppages at affiliate companies, the UAW said it rejected another contract proposal and negotiations took “a turn for the worse,” UAW Vice President Terry Dittes told local presidents and chairpersons in a letter sent Sunday. 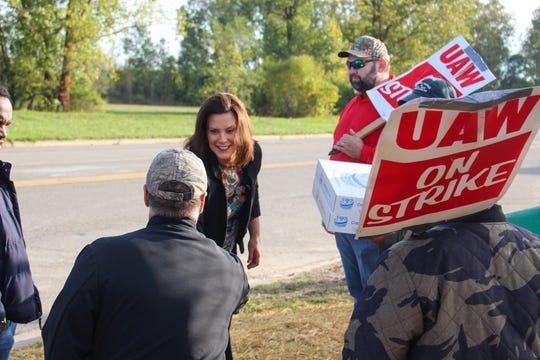 Now that the strike is in its fourth week, the economic repercussions are expected to become more deeply felt: by GM, whose lost profits are mounting; by UAW members, who’ve seen pay cut to a fraction of of their weekly take-home pay; by GM suppliers and the southeast Michigan economy, where a number of the striking GM members and companies impacted by the strike are based.

On Monday, GM closed its Ramos Engine plant in Ramos Arizpe, Mexico, affecting 415 employees. Now, more than 10,000 non-UAW-GM employees in Ohio, Mexico and Ontario have been impacted by the strike.

In a video posted on the UAW Region 2B’s page, Regional Director Rich Rankin, who represents members in Ohio and Indiana, said the community support has been “overwhelming” for his members on picket lines.

“It appears as though General Motors is shipping more vehicles up from Mexico than normal to compensate for the lack of vehicles that the hard-working, brave men and women in the UAW produce for them every day,” Rankin said in the video, encouraging folks to not buy vehicles built in Mexico.

“Something I think we are overlooking is the fact that if General Motors can’t sell those Mexican-built and foreign-built vehicles, that is some way we can help these workers because the sooner we drain GM’s pocketbook, the sooner we can get back to work,” he said. GM declined to comment on the video.

The Detroit automaker assembles six models in Mexico for sale in the United States: the GMC Terrain and Sierra; the Chevrolet Blazer, Equinox, Silverado and Trax. The Silao Assembly plant where the Silverado and Sierra are built is down because of the UAW strike.

In his Sunday letter, Dittes said GM has shown “an unwillingness to fairly compensate the great workforce of the UAW.” In response, GM said that it would “continue to negotiate in good faith with very good proposals that benefit employees today and builds a stronger future for all of us.”

The letter came after a positive Friday update from Dittes that noted progress had been made in negotiations specifically on health care and temporary workers, two of the most contentious issues.

That same day, Vance Pearson, a member of the union’s governing International Executive Board and the director of UAW Region 5, was placed on leave, nearly one month after Pearson was charged with embezzling union funds, mail and wire fraud, and money laundering.

An affidavit written by Labor Department Special Agent Andrew Donohue in the criminal complaint against Pearson details a years-long conspiracy that involved embezzling $1 million in member dues and spending the money on personal luxuries. The Detroit News identified two unnamed officials involved in orchestrating the scandal as UAW President Gary Jones and his predecessor, Dennis Williams.

The criminal case focuses on lavish spending by UAW officials during conferences in Missouri and California and provides the most detailed government account of alleged misspending in Palm Springs, including $120,000 for cigars, steak dinners and drinks, and 107 rounds of golf. The News reported the government’s interest in Palm Springs in September 2018.

From 2014 to 2018, a period that covers Jones’ tenure leading UAW Region 5, Pearson and other leaders submitted phony expense forms seeking reimbursement from UAW headquarters, prosecutors said in an affidavit. The phony expenses were supposedly tied to UAW Region 5 leadership and training conferences.

Three days after being charged, Pearson attended negotiations with GM in Detroit, though he was not a member of the UAW-GM national bargaining team and did not vote on if the union should strike.

Pearson’s leave comes as two former UAW communications directors, Frank Joyce and the Rev. Peter Laarman, used an op-ed Friday to break what they called an “institutional code of silence.” They issued a scathing rebuke of the UAW leadership for abandoning the practices of the formerly “squeaky-clean organization built by the union’s earlier generations.”

They called for the resignations of the UAW’s entire International Executive Board and the assistance of the Canadian auto workers union, Unifor, to help reconstitute the leadership. Specifically, they condemned the lack of action against Pearson.