Stocks surged yesterday even after difficult reports from both JPM and WFC, the International Monetary Fund and guess who? Yup Goldman Sachs – as they suggest that there are darker days ahead. The headlines say it clearly:

So after the earnings hit the tape at 7 am – (JPM reported earnings fell 70%, WFC fell 89%) – the IMF released a story suggesting that while the global economy is almost certainly in a recession. The severity of this one is “unmatched by anything aside from the Great Depression.” Think about that for one moment. Is history repeating itself? It always does. Because as memories fade and those alive then are no longer with us – the history of the past can become the events of the present. The thinking goes like this: massive stimulus programs initiated by central banks around the world that continue print money has to suggest that at some point – the money isn’t really worth anything and then what?

And the report from the IMF now expects global GDP to contract by 3% vs. its January forecast of a 3.3% expansion.

Then, our friends at Goldman who came out on Monday and said the “lows are in, time to buy” published another piece that appears to contradict Monday’s bullish commentary – which leaves you to wonder – does anyone at GS talk to each other? I mean on Monday – they tell us the worst is behind us in terms of the selloff and then on Tuesday they say that the downturn is going to be four times worse than the GFC (Great Financial Crisis) – which would suggest stocks are going lower and not higher. I mean – which is it? Make up your mind and stick to the story.

Oh boy. But even after all of this – somehow the algos went into Risk On mode and took stocks higher, leaving the Dow up 558 pts or 2.39%, the S&P up 85 pts or 3.06%, the Nasdaq up 323 pts or 3.95% and the Russell adding 26 pts or 2.09%. The thinking? The algos are looking through this short term negativity and focusing on the re-opening of the US and global economy even as the headlines suggest “not so fast.”

The interesting part of yesterday’s move was that stocks opened strong and got stronger as the clock ticked. The biggest movers (winners) were healthcare +3.3%, tech +4.2%, communications + 2.9%, consumer staples +4.3%, consumer discretionary +3.9% and utilities +2.9%. In fact, the only sector that finished lower was energy – (see more below). Now, the one sector in this group that doesn’t belong IF the story is as bad as the headlines suggest is consumer discretionary – and why is that? Because they are just that – discretionary – they are not necessities. So if times are going to get tough – why would consumers go out and buy stuff they don’t need which would suggest that those stocks would underperform. I mean healthcare, yes, tech, yes, communications, yes, consumer staples, yes, utilities, yes. But discretionary – not so much, but we will see…

Now the positive story that overwhelmed the negative stories is clearly the slowing of the virus and the fact that governors around the country began discussing relaxing social distancing mandates as well as restarting the economy. While no one can predict what that will look like it is exciting to consider that we can start to live, hug and kiss again. Look – it is going to be an UGLY earnings season – but anyone who is not living under a rock already knows this. So as long as the earnings come in as expected – then it will be what it will be. Stocks have already reacted – the swift and painful selloff that took place in March wiped out years of gains – and as I’ve said – I do expect the market to test lower again (S&P 2500-ish) before this earnings season is over. And if 2500 doesn’t hold – then the March lows of 2200 would be the next stop.

OIL! OMG – are you kidding??? Oil skidded to a close yesterday – falling 10% at one point before rallying a bit and closing down 7%, after the Saudis launched a new price war – offering record discounts to Asia even after the 11th hour agreement to cut OPEC production by 23%! So here is the deal – yes they agreed to cut production to manipulate volume but they did NOT agree to manipulate or “fix” pricing discounts! (I guess they forgot to send that memo). And as the kingdom faces continued competition from rival suppliers for market share on the Asian continent they decided that they had to slash and burn prices by offering bigger discounts. So yes – the “official selling price” (OSP) is what it is – but the final (wink, wink) price is very different. In fact, the Saudis offered an additional discount of $7.30 to their Asian clients as demand for oil plunges due to the virus. So yesterday we saw oil trade as low as $19.95/barrel before settling in at $20.82.

This morning – oil is under pressure again as this story permeates the media. Even the IMF is getting into the fun suggesting that demand will fall by 9.3 million/barrels per day erasing a “decade of growth.” As of 6 am – WTI is trading down 2.2% at $19.64/barrel. It is apparently on its way to $15! Prices not seen in decades. In fact – for the history buffs – oil peaked at $35/barrel in 1980 and then went onto to fall to $10/barrel in 1986 – which represented a 70% drop over 6 years. Do you know what the drop has been this year alone as of today? 71% and apparently going lower…

This morning stocks are giving back most of yesterday’s gains. The Dow is down 419 pts, the S&P is off 51 pts, the Nasdaq is down 117 pts and the Russell is giving up 35 pts. Why you ask? Simple, more negative headlines and more negative earnings. While not expected to be good, it will only accentuate how bad they really are and what that means for the global economy (and ultimately stocks). Now additionally – don’t forget – the market has suffered tons of internal technical damage – broken trend lines for the indices and broken trend lines for individual names, all caused by broken macro data and the forced closure of the global economy and with no real bottom put in yet. It continues to whip around as it searches for stability – stability that remains a bit elusive. Just when you think it’s over – we get hit again. So stay strapped in – continue to tweak your portfolio when necessary – talk to your advisor, build a defensive list of names – that will benefit once we turn the corner.

Remember – active investing has returned! The idea that zero cost, passive investing will outperform in this environment – is a mistaken idea. ETFs are made of many stocks that supposedly represent the investing mandate. The problem with that is that so many of the stocks in the ETFs are not stocks you would buy individually – so why own them in an ETF? It’s counter-intuitive.

Economic data today includes Mortgage Apps, Retail Sales – month/month of -8%, Ex Autos and Gas of 5.2%, Empire Manufacturing of -35, Ind Production of -4%, Capacity Util of 74 and the Fed’s Beige Book – which details national current economic conditions region by region. (Can’t wait to see what that has to say).

European stocks are lower as well – reacting to the latest report from the IMF suggesting that the global economy is in crisis – this despite the fact that the many of the European countries that were locked down are beginning to return to normal (if that’s possible). Italy is beginning to allow businesses to re-open, Spain is allowing construction and manufacturing to resume, Denmark is re-opening schools.  Other countries – France and the UK – are extending the lockdown until early May. So – it remains confusing and cautious.

The S&P closed at 2846. Futures are already down 2% – and if we follow in the footsteps of the other global markets that seems to be about right and that would take us back below 2800. BAC announced – EPS of 40 cents/share versus the exp of 54 cents. Credit costs rise to $4.2 billion up from $1.8 billion. Trading revenues strong. UNH already announced and beat the number (positive). So expect more mixed results and as a result – more mixed behavior for the markets – driven the whims of how the algos react to the news. Again – stay tuned and stay strapped in as we move through the season. 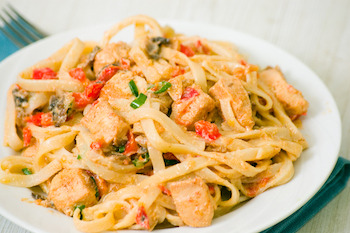 This is an easy dish to make and you can serve it over linguine or even white rice. It is the perfect alternative to the more traditional shrimp scampi for anyone that does not like shrimp.

In a large non-stick skillet – add butter, splash of olive oil and the garlic – sauté around for a couple of mins. Now raise the heat to high and add in the chicken pieces. Cook the chicken for about 8 – 10 mins.   When cooked – remove from pan and set aside.

Next – add in the vermouth and lemon juice – bring to a boil – it should begin to thicken a bit – no more than 40 secs or so. Add the lemon zest and parsley… scrape the bottom of the pan to get any bits. Turn off the heat and add back the chicken. Stir well to coat.

At this point you can serve it over the linguine or the white rice. You should also make a large mixed salad, tomatoes, cucumbers, scallions and dress with oil and vinegar. A squirt of lemon juice and a shake of dried oregano and s&p finishes this off nicely. Don’t forget the garlic bread.