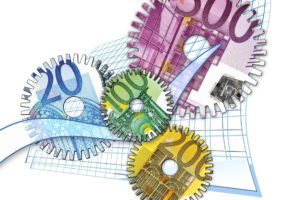 Good Morning America, Good Afternoon Europe and Good Evening Asia. It’s Friday! Stocks are UP and up BIG – news that Europe is waking up and re-starting their economies is one part, news that the US is laying a plan to re-start our economy is another part. The apparent real reason for the move is the news out of the bio-tech sector. Roche (ROG – SW – Europe) and Gilead (GILD – US) are off to the races – dragging markets around the world with them. Asian markets ended the week up between 1% (China) to 3.1% (Japan) and in Europe right now – markets across the region are soaring, with most registering gains of 3%. Roche – the Swiss drug maker, was trading up 3% overnight on news that they have made advancements on an antibody test. Gilead – the US drug maker, is trading up 13% in overnight trading on news that their drug – Remdesivir – has shown remarkable progress in treating patients with the virus at a Chicago hospital. In fact – the headline defines it as a “rapid reduction” in the fever and respiratory symptoms.

But let’s review the action yesterday that saw the markets get whiplashed and move lower for most of the day as the economic data, weaker earnings and news that the PPP (Payroll Protection Program) has already run OUT OF MONEY continued to slam the market. (The SBA announced that they have processed more than 1.6 million applications before the $350 billion were exhausted). All day long – the indexes struggled to find their footing but continued to get hit by waves of selling. That was until word started to spread that Donny was prepared to announce “a plan” – a plan to restart the economy that was viewed as an overriding positive – causing markets to rally into the end of the day leaving the Dow up 33 pts, the S&P ahead by 17 pts, the Nasdaq gaining 139 pts and the Russell off by 6 pts. (The bio-tech news did not officially hit the tape yesterday during the trading day – it was officially announced after the close. Rumor is that word had leaked out – late in the day –  about the positive news surrounding GILD and that is what really caused the algo’s to turn – sending the market from negative to positive by the end of the day.)

Now look, the economic data was NOT good again, suggesting that the impact of the virus coupled with the forced shutdown of the US economy is going to continue to surprise on the downside. Housing Starts – which were expected to be down by 18.7% – were down 22.3%, the Philly Fed Survey – expected to be -32 pts, collapsed falling 56.6 pts. Initial Jobless Claims rose by 5.245 million people bringing the one-month tally to more than 20 million Americans and Continuing Claims are piling up at 12 million.  Add in weak earnings and you had the recipe for what could have been another disastrous day – but as noted above – it wasn’t.

Valuation estimates for the S&P and for individual companies remain difficult to determine. That creates difficulty for analysts to assign values for the markets and this will most likely remain so until we get more clarity on a restart of the economy –adding uncertainty and volatility in the days and weeks ahead. Today’s positive news is just that – positive – but we will need more data and more results before we can say that we are out of the woods.

Now – expect the fight over a re-opening to be just that – another reason for Republicans and Democrats to not work together. Republicans want to get the economy running again, while Democrats want to slow the process down – suggesting that we are not ready. Remember it is an election year, and the Democrats are gunning for the White House in a big way. So while they appear to be concerned, you have to ask – is there a method to this madness? Are they fighting a re-opening for their benefit? I’d rather not think so, but you have to wonder.

At 5 pm – last evening – Trump took to the podium in what has now become the daily briefing – announcing a 3-part plan to try and get the economy humming again. Trump laid the responsibility directly on the states laps – calling on Governors to decide how to restart their own economies amid the destruction created by the coronavirus. Democrats – led by Nancy Pelosi are saying “Not so fast big boy.” She wants a coordinated federal response (not a state’s response) and more testing and more contact tracing.

[Contact tracing is the process of identifying anyone that has come into contact with an infected person – allowing for further identification of more possible infections as well as collection of more information.  And that is exactly what is happening in Beijing – the Communist party now requiring all Beijing citizens to carry a card with a barcode (to identify you) that must be scanned when you leave your apartment and then scanned when you enter and exit ANY building. This way – the government can tell exactly where you went, how long you were there and who was near you. Thoughts?]

Ok – we could talk about this all day – so let’s move on. As noted, US futures are UP and up big (no need to worry about circuit breakers today). Dow futures surging by 700 pts or 3%, S&P’s are up 79 pts or 3%, the Nasdaq rallying by 187 pts or 2.14% and the Russell adding 58 pts or 5%. The excitement is all about GILD and Remdesivir. Now while this is good news – it is not a slam dunk by any means. We need more data and more results. What we do know is that the early indications are positive if administered early as it appears to slow the replication process in the body. Let’s not ring the bell just yet. While this is positive, it is not definitive by any stretch. Next – you ask – why the strong rally when housing is collapsing, Goldman telling us that this recession will be 4X worse than 2007/2009, earnings data is very cloudy with no forward guidance, the US economy is at a standstill and the SBA has already run out of money and the worst of the unemployment claims has yet to hit. Think algorithms, they can’t process all the data at once – they focus on the headline of the day and today’s headlines are attempting to accentuate the positives – a drug treatment and a supposed plan to re-open. Talk to your advisor – maybe consider making some sales on the recent winners and re-allocating into names that are set to benefit as we normalize.

There is no economic data today so expect the media to focus on Gilead and the re-opening process.

In Asia – China reported that first quarter GDP fell 6.8% vs. last year – larger than the expected -6%, representing the first quarterly decline since 1992 when they first started keeping official records. Now while this is not good – the markets had already expected it and once this hit the tape. Analysts already started to discuss the “significant recovery that is expected in the second quarter as life returns to ‘normal.’” But not so fast – because China will still face the headwinds created by the hit to the European and US economies – economies that still haven’t fully re-opened and may not full re-open until sometime during the summer.

European stocks as noted are surging – for many of the same reasons, a return to normal and hopes that a drug treatment might have been identified. Eurozone inflation for March coming in at +0.7% – down from +1.2% in February.

OIL is under pressure again as news that the Chinese economy shrank added more pressure to the demand story. WTI (West Texas Intermediate) falling 7% to $18.33/barrel (incredible really) as inventories build even as refineries continue to cut production. Apparently the “deal” that OPEC and the others reached – is not helping the oil story. The fall in demand from China is only adding to today’s weakness. This morning we see WTI down 6% or $1.25 at $18.62/barrel – well below any support level at all leaving the next move completely up to interpretation. Where does oil settle? $15, $10? 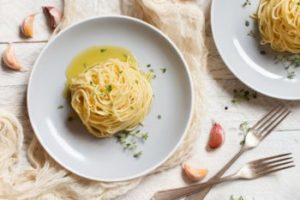 Considering all the news around “oil” I figured I’d give you a classic Italian dish which is nothing more than spaghetti, garlic, olive oil, fresh grated cheese, parsley and red pepper (optional).

This is such a classic Italian pasta dish, hails from the region of Abruzzo. Abruzzo borders the region of Lazio to the west, The Adriatic to the East, Marche to the north and Molise to the south-east… the capital of Abruzzo is L’Aquila – the city that got hit by the earthquake on April 6, 2009. The damage was tremendous – much of the capital city was destroyed. There are over 150 km of beaches on the east coast along the Adriatic and the scenery is spectacular. To the west – you will run into the Apennines Mountains – which create one of the most mountainous regions in all of Italy. The climate varies from warm and sunny on the coastline to an Alpine climate deep in the mountains.

Begin by bringing a pot of salted water to a rolling boil and add the spaghetti.

In a large sauté pan – add 1 cup of olive oil and the sliced garlic – now turn the heat up to med and sauté the garlic… here is the trick – you do NOT want to burn the garlic – you want to toast it. Once the oil is hot and the garlic begins to sizzle – turn heat to simmer and continue to stir… allowing the garlic to brown… once toasted (will have a nutty color) add about a quarter cup of the pasta water and turn the heat OFF. This will stop the cooking…

In the meantime – the pasta should be done – just aldente… strain – reserving a mugful of water – now place the spaghetti in a large flat bowl – season with s&p and if you like – some red pepper flakes (this is optional) now add in the garlic and oil and then 2 handfuls of the grated Reggiano Parmegiano and the chopped parsley. Toss and mix well.

Serve immediately – offering more fresh grated cheese to your guests.   (if you sense that it is too dry – feel free to add back a bit more of the pasta water to moisten – but do not drown… only moisten).