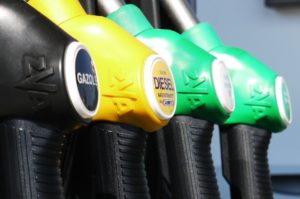 Stocks rocketed higher on Friday, seemingly ignoring what is going on in the economy leaving the Dow staging its best 2-week rally since sometime in the 1930s. At this point does it really matter when in the 1930s? The Dow ended the day up 704 pts or 3%, the S&P added 75 pts or 2.68%, the Nasdaq surging 117 pts or 1.3% and the Russell jumped by 51 pts or 4.3%. Either way the rebound in stocks has left analysts/strategists and investors confused. Stock prices indicate one thing while economic and earnings data indicate something quite different. Now – yes, the market is a discounting mechanism – so the idea that stocks are rallying when the data is deteriorating is not completely odd, but the speed at which stocks have rebounded is what is confusing to so many Wall Street professionals because the speed at which the economic data is collapsing is equally fast. Look – the rally suggests that the “algos” are betting on a “speedy V shaped recovery” once we get on the other side of the coronavirus. And there has been so much talk about when and how that is about to happen. There is plenty of discussion about how it won’t be a V at all, but more like a W with fits and starts that will take the market up, then down up again.

Recall what happened last Friday – news that Gilead was reporting early positive results with Remdesivir for treating COVID19 patients and that Swiss drug maker Roche was close to having an early “antibody” test available – sent stocks soaring. This was because any news of a treatment or vaccine will be welcome news, for both stocks and the world. (As the 30+% selloff has be directly attributable to the devastation caused by the spreading virus – born in China and now present in more than 180 countries – so any effort to halt the spread of the virus would be very welcomed news)

All this while the eco data continued to plummet. Last week saw Retail Sales fall 8.7% – which I might say was a positive that it was ONLY 8.7%. I mean they shut the whole damn country down – are you kidding? Empire Manufacturing, Capacity Utilization, Industrial Production, Housing starts and Building Permits, Philly Fed and the Fed’s Beige Book etc. All fell off the cliff while Initial Jobless Claims, Continued Claims and Unemployment surged to record highs. In fact, the official data says that Unemployment is only 4.4% but the whisper number says it already pushing 10%. If no one noticed – OIL continues to get hammered – even after the Saudis and Russians along with the peripheral members made a deal to cut production to try to stop the bleed. While it was a bit of welcomed news initially, oil did attempt to rally. So many analysts – immediately poo pooed it as “not enough” and BOOOMMMMM! The bottom fell out – again! It now feels like an avalanche. Once it gets started it is impossible to stop. You just have to let it go until cooler heads prevail. And then – the Saudis went and undercut every other member increasing the “discount” offered to Asian customers to maintain dominance in the supply chain. I mean you can’t make this stuff up!

When the deal was announced – WTI (West Texas Intermediate) was trading at $20 and surged to $27 (+35%). Then it made a U-turn and has since plummeted by 48% trading down to $14.82/barrel as of this morning. Energy names getting slammed in the process as the plunge in oil prices cuts deep. The XLE (energy ETF) fell some 58% since February has attempted to rally and HAS rallied back about 46% of that loss. But with the underlying commodity weakness this morning, expect it to pose a challenge for the whole sector today. Expected US energy company bankruptcies in the months ahead will also surely add to the pressure on parts of the sector and this is something that I don’t think the most recent action in the markets really appreciates!

Increasing supplies, plunging demand, and global storage tanks overflowing all contributing to the plunge in prices. Now once we thru this – and the global economy comes back online – then you would think that demand will surge and the demand/supply equation will stabilize. But that is still a risk. So much has changed and the way business gets done today is different than it was only one month ago. ZOOM, SKYPE, FACETIME etc. are all replacing the need for business trips and face to face meetings. So many workers have proven that working remotely is in fact a real option, technology has allowed for it and the last 4 months around the world have proven its effectiveness. So much has changed. And the “normal tomorrow” will not be the “normal of yesterday.” The ripple effect caused by the virus has been launched and the pervasive and usually unintentional influence of its effect will be felt for years to come. This is a common result of such unexpected impactful events that catch the world by surprise.

As the market surges, the virus continues to slam the world. Valuation estimates for the market remains difficult to determine – so we can expect more volatility – especially as we are smack right in the middle of earnings season and as we have seen thus far. So many companies have refused to offer forward guidance. Why? Because they can’t. They can’t see thru the darkness (at the moment) and while the earnings have been weak. We know that but what we don’t know is what the future looks like around the world adding uncertainty and angst in the days and weeks ahead. Friday’s positive news was just that – positive – but this morning it is a different story.

US Dow futures are lower by 435 points, S&P’s are off by 53, the Nasdaq is lower by 92 and the Russell is giving up 26 points. Oil is down more than 20% overnight as the coronavirus ravages demand causing supplies to surge putting pressure on prices and that is not helping the tone anywhere in the world.

Over the weekend we actually got good news on the virus here at home. NYC has seen its peak (according to Cuomo) of new cases, infection rates and hospitalization falling and he is prepared to roll out anti-body testing this week. NJ tells us that they are “flattening the curve,” Florida is beginning to open the beaches, states are beginning to talk of re-opening their economies and Treasury Secretary Stevey Mnuchin tells us that the administration is close to striking a second deal with Congress to fund another round of loans for small businesses. (Recall that the first $350 billion program ran out of money in 4 days….). Yet, stocks are under pressure, because as the virus subsides the focus will return to fundamentals and those fundamentals are dismal. 22 million people are now out of work and this week another 4.5 million people are expected to hit the unemployment rolls – sending the total closer to 30 million.

Other economic data this week includes – Markit US Manufacturing PMI – exp of 38, Services PMI – exp of 31, Composite PMI exp to be 33 – all levels deeply in CONTRACTION mode. New Home Sales to plunge by 15%, Kansas City Fed Survey is expected to be down 34 – but will most likely be more. Durable Goods, Capital Goods are also expected to be deep in negative territory while the Dallas Fed Survey is expected to be negative 75 pts. Now, while these numbers are expected – they are horrendous numbers. The fear is that they could be worse than the expectation and that will keep a lid on.

The Dow and S&P have rallied back to “down trending trend lines.” levels that should prove difficult to penetrate. While the Nasdaq last week penetrated both the 50 and 200 and is now kissing its 100 DMA in an attempt to lead the market back to new highs. Recall that the Nasdaq is all about Tech. We have seen tech rally 31% off the March lows and 18% off of the April lows, leading the market higher and leaving this index only off 3.6% on the year, vs -15% for the Dow and -11% for the S&P. But as discussed – is this a little too fast in such a short time considering the extent of the damage? Or is tech suggesting that it is the wave of the future and its action is separate and distinct from the rest of the US and global economy? Thoughts?

The S&P closed at 2874 on Friday! Very impressive now up 30% from the March 23rd low. But it has rallied to the 50 DMA trend line and this should cause some resistance. As noted the Nasdaq has surged up and through two trend lines and is just about to test its third, in what some describe as the new “safety trade.” Be careful, while it feels good – it needs to breath.  And with the next two weeks full of earnings news – there is sure to be some “back and forth.”

My sense is that the S&Ps move up in the last two weeks has been a bit erratic – with support back at the 2650 level, or 7% lower from here. While the FED and the administration have attempted to “make it right” and it usually doesn’t make sense to “fight the FED,” you also have to be realistic when the market surges higher so swiftly.

In Europe – markets there are all struggling with the latest news. With parts of Europe beginning to re-open we will see how that helps or hurts the action. Oil is the story today around the world – so get ready to hear all about how and why.

Earnings today include: TFC, ALLY & HAL before the open and IBM, HXL, EFX, CCK after the close.

Gold which traded up to $1788/oz. on April 14th in a surge to safety has given up about $100 as the market surged higher at the end of the week. This morning – Gold is off by $2 at $1696/oz. and should find some support at $1675. News of the virus will continue to drive the short term action in Gold as it comes under control. Expect Gold to back off. But once we get thru that and the reality of the economic damage hits home – expect to see a flight to safety once again. 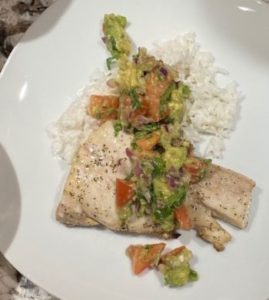 Over the weekend my daughter and a friend treated me to this wonderful dish. It was simple to make and they served it over coconut jasmine rice – Outstanding.

For the salsa – combine all the ingredients in a glass bowl and set aside.

For the Fish – make the marinade and then pour over the fish, turning the fish on both sides to coat with the marinade. Allow it to rest in the marinade for at least 30 mins.

While this is happening – make the rice. For this you will need: 1 can of coconut milk (14 oz.), 1 and a quarter cup of water, 1 tsp sugar, pinch of salt and 1 and a half cup of jasmine rice.

In a sauce pan – add all ingredients except the rice – Stir to dissolve the sugar – add the rice and bring to a boil – then reduce heat to low, cover and cook for 15 – 20 mins.

When ready to cook the fish – turn on the oven to broil – allow it to get hot.

On the stove – heat up an oven proof grill pan – when hot – sear the fish – skin side down for about 3 mins, (depending on its thickness), then transfer the pan to the oven and broil for another 3 or 4 mins.

When complete – serve over a bed of coconut jasmine rice and top with the tomato/avo salsa. Serve with a chilled rose or white wine of your choice. Trust me – you will love this dish – simple to make, presents beautifully and is delicious.