The downbeat from Monday turned into a bigger downbeat on Tuesday! The slide that began on Sunday evening in Asia is alive and well….sending stocks careening around the world….and here in the US – the action was not different…..Futures yesterday morning suggested a lower open, Stocks in Asia had fallen nearly 2% and stocks in Europe opened down 2% – but ended their day down closer to 4%…..So when the opening bell rang on the floor of the deserted NYSE  – a function of Corona – stocks went into Risk Off mode…..which wasn’t really a surprise considering what had taken place overnight.  And the oil story which also gained momentum overnight was smack – front and center in the media – suddenly the massive oversupply and the destruction of demand that had been building for months – that everyone ignored – was set ablaze…. The collapse of the May contract – which sent prices into negative territory for the first time in the history of the world – was now infecting the June and July contracts – isn’t it funny really?

Clearly though the action of the last couple of days is all about the oil story and not about the virus story at all….and the realization that the destruction that the global shutdown coupled with the massive oversupply in oil is doing to the economy. The declines that we’ve seen over the last two days is a direct reaction though, to the unexplainable rally that has taken the market up 35% from the March low. Now, not that the market won’t rally – it will and it has, but the rally is a bit inconsistent with the current outlook for the US and global economy. 5 weeks ago – when the shutdown began the sense was that it would be short-lived and that the bounce back would be almost immediate – and that helped to fuel the move off the lows….but as the days turned to weeks – the tone of the rebound is beginning to change a bit…..analysts, CEO’s, legislators, strategists, and citizens around the world all re-thinking the ‘quick rebound’ story and then this week’s collapse in oil only gave everyone a reason to take/book some profits in stocks that have rallied even more than the overall market.

All of this should be considered somewhat normal in an environment that has seen such internal damage done to the market……Remember – when the market broke down – it sliced right through a host of technical support levels like a “hot knife thru butta” (think Streisand), while individual stocks got slammed even more, so when a rebound happens to the extent that we’ve seen – it makes perfect sense that the trader types and the active managers would create near term alpha by trading around a core positon in a name that they like without abandoning it completely.

So for instance – the manager owned 300,000 shares of Apple and considered it a core position.  As the stock broke down (34%) in March – they bought more Apple (in a separate account) establishing a different cost basis for this investment – making a bet that the selloff in Apple was a bit overdone – so when in fact the stock finds a base and begins to rally – they may buy more and then when it rises by some pre-determined percentage– in this case it rose 34% off the March low – they sell THAT position – ringing the cash register (that has made a profit)  while maintaining their core position in the original account – which has also gained back in value. The key (as always) is to try and buy low and sell higher!  Now the decision when to sell that trading positon – can be a range of events, but in this case the decision to sell was driven by the collapse in the May WTI contract on Monday and the continued collapse on Tuesday that infected the forward months – June and July.  Individuals may do the same thing – you own Apple – you like Apple – it is a core holding for you – you are going to leave it to your kids – so you also buy more on a breakdown also expecting to sell it on a rebound – adding a bit of alpha to your portfolio while maintaining your core position.  Now to be clear it doesn’t always work that simply – but that is the idea!

In addition – do not discount – and I’ve said this many times – the impact that the passive investments have on market action….Passive investments – think ETF’s and more specifically the very complex, levered ETF’s which are not created for the retail investors but are created for the institutional investor to help them manage much larger amounts of money – and if the market is complacent then everyone plays nice in the sandbox – but when the market is angry – the impact that those complex ETF’s have on the overall market get amplified and since we all play in the same sandbox – we all get punished and rewarded. This article that appeared yesterday on CNBC is a perfect example of an ETF gone wrong in an environment that was never ‘expected’.

This morning we are seeing markets around the world in a bit of a rally mode….in what feels more like a bounce vs. anything real just yet.  Look the Dow has lost over 1100 pts in the past two days or nearly 5.5% after rallying some 33% off the lows…. This is NOT uncommon at all – but what is uncommon and should raise the flag is what is going on in the oil markets. This will be the story going forward – as the expected bankruptcies in the oil patch are beginning to mount and this will be the real story going forward while bankruptcies in the retail space will only add fuel to that fire.    Look the virus will pass – we are seeing that, tests for the antibodies and tests for the virus are becoming more available.  LABCORP CEO Adam Schechter – saying just that on CNBC this morning that they are expected to have both these tests available in volume starting next week. That is good news for us and for the overall tone of the market today.

US futures are up – not 1100 pts, but they are attempting to rally. Dow futures are gaining 235 pts, S&P’s up 26 pts, The Nasdaq gaining 87 pts and the Russell is up 9 pts. There isn’t much new news around the world to ‘explain’ today’s move other than oil is not under pressure today as investors digest the moves of the past two days and the virus appears to be in continued decline around the world. Talk of re-opening the US continues to be a ‘hot topic’ but we are watching what is going on in Europe to gain insight. Concern over a re-introduction of the virus as we open will always be a concern, but we realize that we must get back to work and that the new normal will be different than what it was only 2 months ago.

There is no eco data today – but earnings reported so far today have for the most part beaten the estimates but continue to warn about the future and that is keeping a lid on a move higher.

The S&P closed at 2736 – down 5.7% in 2 days – but this after the 23% rally in 2 weeks…. recall it traded right up to the downtrending ‘trendline’ that we spoke about.   This level for now represents resistance.    Short term support remains at 2650 – or 3% from here…. a level I absolutely think we will test in the days ahead…. Remember – talk to your advisor – get comfortable with the design of your portfolio – build a defensive portfolio as the days and months ahead remain fairly uncertain which doesn’t mean that it will be a disaster, it just means make sure you’re comfortable. 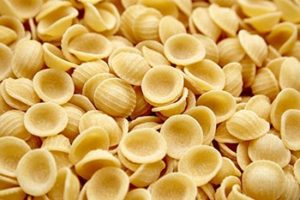 This is a great dish and very filling…. for this you need:

In a food processor add the garlic and chop…. turn off and scrape down the bowl. Add the walnuts and breadcrumbs, and process to a paste. Add the ricotta, 2 tablespoons warm water and Parmesan.  Pulse it – do not blend it……add the olive and walnut oils, and mix until smooth. Taste – does it need salt?  If so add now…. Transfer it to a large, wide pasta bowl.

Bring a large pot of water to a boil.

Fill another bowl with ice water.

When the water comes to a boil, salt generously and add the broccoli florets. Boil four to five minutes, until tender but still bright.  Do not throw out the water………Remove the broccoli and put in the ice water.  Set aside.

Bring the water back to a boil and add the pasta…. cooking for 8 mins…. Before you drain the pasta add back the broccoli directly to the water and pasta….

Remove 1 cup of pasta water and add to the ricotta mixture and stir until well blended. The sauce should have a creamy consistency (add more of the pasta water if necessary).

Now drain the pasta and broccoli and toss with the sauce in the bowl…. add some Parmegiana and have extra on the table for your guests….