Stocks Did an About-Face Yesterday 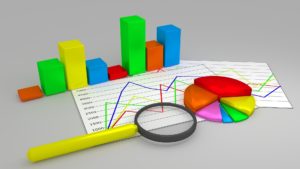 Stocks did an about face yesterday as investors suddenly had a change of heart! What looked like the beginning of another down week turned out to be wrong. Stocks opened lower following in the footsteps of European markets which were getting crushed, all down more than 3%, as the usual suspects took center stage joined by none other than “the Oracle of Omaha” – Warren Buffet.

The usual suspects included talk of the virus, talk of re-opening or not, weak earnings supported by even weaker guidance, weak macro data which is only sure to get worse, increasing tensions with China. Then, Warren Buffet – not only sold his entire stakes in the 4 US airlines (UAL, DAL, AAL & LUV) at a significant loss to boot and what could be the lows of all time – then said that he sees “no opportunity” to invest his cash hoard of $137 billion. Think about that for one minute – no place to put $137 billion!  His mantra of “Don’t bet against America” appeared to be undermined by his nuanced comments about the state of the current economy. While stocks have rallied off the March lows – it is difficult to put a value on the market given the current circumstances and while equities have been pricing in a swift recovery, the bond market is telling us a different story. So his $137 billion sits in a money market fund.

That news hit some asset managers hard – leaving them to ask – “If Warren can’t find anything interesting or worthwhile – how can I?” Bobby Colby – Chairman of Robert W. Colby Asset Management echoed his thoughts saying “he’s keeping his cash hoard then so am I.” This reiterates to his clients that he sees “no good reason to buy equities right now.” Hmmmm – now that’s an interesting thought…

CNBC ran with the story all day dissecting and digesting it with nearly every guest as everyone pondered the same question. Scott Wapner going so far as to ask – “How could anyone buy an airline stock if the Master has tapped out?” This left the airlines battered and bruised yet again. But hey – that’s what makes a market – buyers and sellers with different opinions.

This set the tone – or at least it set the tone for the morning. The algos all in sell mode as the bell rang – but then suddenly the selling stopped and the market found a floor. Tech – which has been the ring leader for both the sell off and the buy back once again took the lead as investors had a change of heart – seemingly discounting all of the negative news– or so it seems. This sent the Nasdaq from negative to positive territory by 9:58 am and while the others remained lower for most of the day. You could feel the urge to surge as oil gained sending the energy sector higher as well closing up 3.4%. By 2:40 pm – the Dow rallied 200 pts to flat and traded up another 25 pts to end day. The S&P, Nasdaq and Russell all rallied back from negative as well ending the day up 12 pts, 105 pts 3 pts respectively.

Overnight the tone has clearly changed. European markets which got beaten up yesterday are all up this morning as individual European countries begin to wake up. Energy which had a good day yesterday is up again this morning and that is also fueling some of the surge. Even news that the top German court found that the ECBs (European Central Bank) government bond purchase program “partially violates the law” has done little to cause markets to sell off. Investors/traders and algos all appear to be focused on any and all re-openings whether they are in Europe or in the US even as concerns about a second wave of infections remains a possibility.

US futures are also higher – sending Dow futures up 150 pts, S&Ps +12, Nasdaq + 56 and the Russell up 12 pts. News that the Treasury is set to borrow $3 trillion this quarter to fund rescue efforts was corrected when Stevie Mnuchin told the press that the number was really $2.999 trillion and this now brings the US government debt to a whopping $25 trillion and the current deficit to $744 billion. Estimates for 3Q borrowing are running as high as $677 billion and counting. All of this money is a result of the multiple stimulus packages and efforts by Congress to resuscitate the economy.

Eco data today includes: Markit US Services PMI exp of 27 while the ISM Non-Manufacturing Index is set at 37.9 – both horrific numbers but 37.9 is clearly much better than 27. Tomorrow brings us ADP employment report – expectations are for a drop of 20 million jobs not created, while Friday’s Non-Farm Payroll report expects a loss of 21 million jobs. Both of these are key numbers and will be closely watched. Thursday brings us another round of initial jobless claims – this week we expect an increase of another 3 million people.

Oil is on the rise again today after rising yesterday taking WTI (West Texas Intermediate) up and thru $20/barrel. This morning it is up another $2 or 10% at $22/barrel while North Sea Brent is up 4% at $28.30/barrel as the expectation is for demand to rise in the US, Spain, Italy, Portugal, India and Thailand as those countries get ready to allow people to get back to work. The sense is that as other countries ease back on restrictions then demand should continue to rise as the world wakes up from this nightmare. WTI downtrending resistance stands at $28.60 – and it appears as if oil wants to test it – the question is what happens when that happens? Do we back off or do we break up and through. If countries begin the process of getting back to work and there are NO signs of a resurgence – then we could expect that oil will blast right thru that trendline as it attempts to normalize somewhere in the $30s. Clearly if a resurgence raises its ugly head and causes another round of closures – you will see oil collapse again. My gut tells me that we will not see a resurgence in infections as the new normal takes hold. For now, the upside target is trendline resistance and right now it is at $28.60, but with each passing day – the trendline will continue to move lower as oil attempts to move higher resulting in a convergence somewhere around $25.

The S&P closed at 2842 after having broken 2800 and trading as low as 2797. This morning we see futures are up leaving us solidly in between both short term and long term trendlines – forcing a range of 2750/3000. I suspect that we will remain in this range for a while until we get more clarity on what happens next. Like oil – if we reopen and there is no resurgence of infections – I would expect the market to rocket higher up and through longer term resistance as investors celebrate the re-awakening.  And if there is a resurgence – then I would suspect that the sell off will be painful as the algos will run wild. So – be patient – don’t go chasing – talk to your advisor – keep some cash on the side and continue to tweak your portfolio as opportunities present themselves. 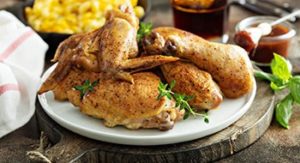 Soak & clean the chicken. Pat dry on paper towels. Arrange in a roasting pan. Drizzle with olive oil, rub it onto each piece. Season with salt & freshly ground pepper.

Roast the chicken in the middle of a 400-degree oven for about 45 minutes. Check the pan every 15 minutes or so and remove any excess liquid with a turkey baster. The object is for the chicken to roast, not braise. – Save the juice on the side in case someone wants some with their meal.

After 45 minutes, drizzle the chicken with the balsamic vinegar, add the olives, turn the heat up to 450 degrees, and roast for 15 minutes more. (It is the balsamic that gives it the mahogany color)

You can serve this with roasted vegetables, roasted potatoes or rice.  Always include a tossed green salad.