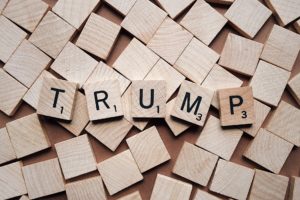 Stocks began the day once again in the plus column – even when futures suggested that it might be a weaker day….the opening bell rang and bang – it was off to the races again…. The economic data reported yesterday morning – while negative – was not as negative as expected and that only gave investors/algos/traders three reasons to continue to buy stocks-

All while the pressure was building on China…..and on some of the social media names.  Algo’s took stocks higher for most of the day and then it was clear…..social media headlines and China headlines were gonna take over and become the directional driver for what happened next.

At about  2 pm – stocks were at their highs….and then it started – Trump taking to twitter to express his displeasure over a new twitter feature that tags suspicious tweets as ‘potentially misleading’  and adds a ‘Check the Facts’ link – which apparently takes you to another site that ‘checks the facts’ and connects you to a range of articles that are supposed to debunk the tweet….Now this is not just a ‘Trump Tag’ – Twitter apparently will tag ANY tweet that appears to be ‘factually misleading’ directing the reader to the sub-site that disputes the flagged tweet.

Then – he diverts the conversation  – telling us and the world that he will hold a press conference on Friday (today) ‘on China’ –  preparing us for the next announcement – an announcement that is sure to be filled with all kinds of rhetoric that will only further inflame the situation vs. helping it subside…….  In fact – overnight China made it clear that Trump and the US should back off and mind your own business as this is an ‘internal matter’…….while Europe, Japan, South Korea and others are noticeably absent …. the UK, Canada, and Australia join the US in condemning this latest move saying that

“Hong Kong has flourished as a bastion of freedom.  The international community has a significant and long standing stake in Hong Kong’s prosperity and stability –  Direct imposition of national security legislation on Hong Kong by the Beijing authorities, rather than through Hong Kong’s own institutions as provided for under Article 23 of the Basic Law, would curtail the Hong Kong people’s liberties.  The move will dramatically erode Hong Kong’s autonomy and the system that made it so prosperous.”

Now all this while the administration has been turning up the heat on China over the ‘alleged cover up’ of the birth and spread of the corona virus and the economic damage it has done to the global economy as well as individual countries…..By the end of the day – the Dow lost 147 pts or 0.57%, the S&P gave up 6 pts or 0.21%, the Nasdaq fell by 44 pts or 0.46% and the Russell lost 35 pts or 2.5%!  There it is again – the Russell ‘outperforming’ – it’s either gaining or losing significantly more than the broader market….as the headlines dictate….

So expect that today’s action will be all about these headlines…..and they are sure to raise the angst and the temperature…..and while headlines like this do create volatility and nervousness – it also creates opportunity for some that remain patient and focused.

This morning as we awake – we find that global markets are lower – although not by much, but the tone is a bit negative and the headlines will give some a reason to ‘cash in’.   Overnight China did approve that controversial legislation that has caused the recent protests in HK.  Today we will learn what the US response will be….…..so it will be an interesting day on the news front – as the market awaits the press conference to hear what he has to say now….Look – it is not a great time to have another geo-political situation flare up, it is not a great time to turn the  temperature up even more and increase the already nervous environment – but it is what it is….and the heat is about to go up…..causing stocks to go down (at least for today…).  By the end of the day – Japan lost 0.18%, Hong Kong -0.75%, China rose 0.27% and the ASX gave up 1.6%.

European markets are all under pressure – think todays press conference….as Europeans are not concerned about the Twitter/social media issues over ‘misleading headlines’.  What the markets are focused on is what happens next to the global economy as the world wakes up and China steals HK’s freedoms……….France announcing that phase 2 of the re-opening is set for June 2nd and that includes restaurants, cafés,  and bars and in the UK – PM BoJo announces that groups of 6 people from different households will be allowed to meet ‘in gardens and parks’ as of Monday – providing that they stay at least 2 meters (6 ft) apart.  The European Trade Commission making it clear that they remain ready to resume BREXIT negotiations with the UK – urging both sides to do the same.  BREXIT – do you even remember what that is?  It seems like so long ago when that was the issue concerning markets.  Oh what so many would give to have that be the issue today…..as of 7 am – the FTSE is -0.94%, CAC 40 – 0.80%, DAX -0.95%, EUROSTOXX -0.64%, SPAIN -1.25% and ITALY -0.25%.

US futures are slightly red but have recovered from the steeper drop seen overnight… Dow futures are down 102 pts, S&P’s are down 7 pts, the Nasdaq is down 11 pts and the Russell is down 9 pts. Apparently the markets are now discounting all that was seen as negative yesterday afternoon – but don’t be so fast…..the press conference hasn’t happened yet…. The language hasn’t been heard yet, the tone is still a secret…..the possibility of a clash with China and a breakdown of supply chains and trade interruptions is real and if that happens on top of what has already happened then a sell off cannot be ruled out at all……as some think that this rally is just a bit ahead of itself considering the underlying tensions that are simmering under the surface.

Look – investors have discounted the virus and have correctly predicted that the worst is over and infection rates are on the decline as the world gets ready to wake up…. – and so stocks have risen swiftly – but they are now trading above what some might consider full value….so expect some resistance.  But that resistance might be short-lived if the markets believe that the FEDS will continue to stand ready to support the markets in the event of a meltdown….and that is the key….the FEDS are not going to allow any new pressures to force a sell off so the expectation is that there will be some other NEW tool in the toolbox to address any weakness leaving one to ask – How is it even possible that the markets can trade freely?

Oil …….is down by $1.15 at $32.55 as the media continues to blame this weeks’ increase in supply as the reason for the pullback – the increase supposedly suggesting a waning of demand….OMG….How about the oil markets, like the stock market, needs to take a breath….it needs to digest the recent surge, it needs to allow the downstream prices to catch up. We remain in the $30/$39 range for now and as we move higher I suspect oil will find resistance at $39 but then it will push up and through to find  equilibrium in the $39/$45 range at the height of summer.

The S&P closed at 3029 about to test the long term trendline at 3001 – to see if it really offers support or not….My guess is that it will offer support unless this press conference suggests a new unexpected level of difficulty between the US and China…..While I suspect that Trump will come out swinging – it will all depend on how the markets perceive it.  Do not make any emotional decisions on your long-term money…if you are day trading – then go for it, buy ‘em/ sell ‘em, do whatever makes you feel good…. 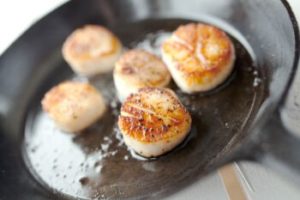 This is also an easy dish to prepare and serve – you will need, 1 lb of mushrooms, olive oil, shallots, chopped garlic, s&p, white wine, fresh bay scallops (like 1 lb) and chopped Italian parsley.

In a sauté pan – add olive oil and chopped shallots – about 3 tbsps. – and turn the heat to high…cook (stir) the shallots until they are a golden brown…now add chopped garlic – 2 cloves.  As the garlic browns (not burns) add the sliced mushrooms – turn heat to med and season with s&p – cover the pan so that the mushrooms make their own juice.  After about 15 mins or so – uncover and let the mushroom water evaporate…..at this point – add the wine – maybe like 1/2 to 3/4 cup…again reduce until the wine has evaporated.

In a separate pan – heat up a bit of butter and oil – Add the scallops to the pan and sear on both sides.   – season again with s&p and the chopped parsley.

When presenting – place the scallops on the plate and spoon the mushroom/wine sauce over them.   You can complement this dish with a wild grain rice and steamed spinach seasoned with s&p and a touch of butter.  Enjoy a light dry white wine – a Riesling, Sauvignon Blanc or Chablis would work nicely.