So stocks did exactly as expected yesterday – they took a breather… allowing some investors/traders/algo’s to take some money off the table in names that have come roaring back and put it aside for today – why you ask – Because today is FED day. At 2 p.m. we will get the results from the latest FOMC (Federal Market Open Committee) meeting. And this, my friends, is why parts of the market paused – I explain below…

In a continued show of force – tech powered ahead – taking the Nasdaq index briefly up and through 10,000 – a level hard to imagine given the catastrophe that we are living in – but at 1:44 pm the algo’s succeeded in pushing it up and through – trading as high as 10,002 before backing off ending the day at 9,953. This just being the latest sign that investors believe that big technology companies have and will continue to change the world. The FAANG stocks doing most of the work – as the index is dominated by the group.  FB +3.1%, APPL + 3.1%, AMZN +3%, NFLX +3.4% and GOOG +0.6% – so as the group goes, so does the index as investors bet on the fact that these companies will continue to be the leaders – becoming even stronger and more relevant in the new world.

As tech surged, the rest of the market struggled to stay awake… Communications – XLC ended the day flat… and every other sector took it on the chin. Energy – XLE lost 3.2%, Industrials – XLI lost 2%, Utilities – XLU lost 2%, Real Estate – IYR lost 1.5%, Consumer Staples – XLP down 0.7%, Basic Materials – IYM lost 0.6%, Healthcare – XLV lost 0.8%, Consumer Discretionary – XLY lost 0.5%.  And remember those airlines and cruise industry stocks that have soared? Well, they came under a bit of pressure as well – talk about ringing the cash register… these name names have soared in recent weeks as they get ready for a world awake… and while I might understand the airlines, I have to admit – not sure why the cruise stocks have exploded with such force – other than they were down 70% – 90% from February highs… so I get it – the bottom fishing, etc. But getting on a boat anytime soon – to be locked in place – not happening for me… by the end of the day DAL – 7%, UAL – 7.5%, AAL – 8.8%, JBLU -8.7%, RCL and CCL down by 10% and 7.5% respectively.

Look – the mood has definitely changed, the hysteria and panic that defined March and April has begun to subside in May and now in June – you hardly hear any of the asset managers/retail investors continue to speak about Covid19 in the way that they spoke about it 2 months ago. It seems that only Andrew Ross Sorkin is still carrying on – hysterical at times even as Dr. Gottlieb attempts to keep him calm…

The sense is that the worst is over and that is what the market is attempting to tell you, but that doesn’t mean that it is not ahead of itself – it is and with all of the stimulus being pumped into the system via the FED – it’s hard to think that the market can really adjust to what the broader implications are to the economy, the macro data, and future earnings. It seems that it will be a bit distorted really – comparisons of y/y earnings etc. will continue to look horrendous (but we know this) and any further lack of guidance when 2Q earnings start in July will not be received. But like I said yesterday – most analysts have already tossed aside 2020 earnings altogether and are now focusing on 2021.

But today is FED day – and we can expect that all eyes will be watching the details… yes, we will get other eco data today – including CPI (consumer price index) otherwise known as the ‘inflation indicator’ – exp of 0% m/m and +0.3% y/y. CPI ex food and energy is expected to come in at +1.3% – but unless these reports are so significantly different than the expectation – the real driver for today will be the 2 pm report out of the Fed and the press conference that follows – so that everyone can listen to Jay Powell explain the thought process and then come up with a story about ‘what they heard’ – remember – everyone hears the same sentence in a different way – for example –

‘The sky is blue.’ – leaves the word blue open to all kinds of interpretation… is it light blue, sky blue, dark blue, black and blue – you get it right?  And depending on what color blue you think it is will define your interpretation… just sayin’…

So, this may in fact be anti-climactic because no one expects any change and he (Jay P) has made it very clear in prior appearances that rates are to remain at 0 for ‘a while’ (and we know that the definition of ‘a while’ has so many interpretations). Now the key will be the forward guidance and that my friends will be the deciding factor about what happens next – will his words suggest a more dovish tone (positive for stocks) or a more hawkish tone (negative for stocks)?

Dovish comments would include words like ‘rates to remain at 0 for the foreseeable future’ or ‘we stand ready to get more wood out of the woodshed’, pull more tools out of the toolbox’. If he even hints at buying equities’ he would set the markets ablaze – just sayin’…. Hawkish commentary would include words like ‘the FED is prepared to consider rate adjustments in the future’ (suggesting hikes) or ‘the committee is not unanimous on the future direction of rates’ suggesting that there is a break in thinking… Or – the FED is not considering buying equities. In the end – there is this expectation of the ‘permanent FED put’ which is why we have seen the US market go bonkers since the March lows and if that idea is questioned at all, if the market or the reporters covering the press conference report such a thought – then watch as stocks easily give back 10%, maybe 15%.  Now, do I think this is likely to happen – NOT!  But let’s not go there right now…

I also expect to see the dot plot once again… for those of you that don’t know what this is – here’s a primer… it goes back to your days in kindergarten… you see, each member of the FOMC puts a dot on a graph to signal his/her expectations for future rate changes (up or down).  The ‘dot plot’ as it is called then becomes a visual representation of the expectations. And just to keep it mysterious – the dots are not identified – which then creates a whole new game of ‘Guess the Dots’ as all of the talking heads weigh in on whose dot is whose… It’s all very fun and exciting! Oh boy…

In European trading this morning – markets across the board are lower… as investors remain cautious ahead of today’s 2 pm announcement. Adding insult to injury – was a report out of the OECD (Org for Economic Cooperation & Development) that predicts a global recession – one not seen in 100 years that is about to hit the world economy – a recession created by the surge of the virus and they add that if we get hit with a second wave of infections – then expect the global economy to contract by 7.6% – a number greater than what the World Bank predicted only days ago.  In early morning trading the we see the FTSE -0.26%, CAC 40 -0.15%, DAX -0.35%, EUROSTOXX -0.20%, SPAIN -0.44% and ITALY -0.11%.

US futures are mixed this morning… Dow futures down 16 pts, S&P’s are up 2 pts, the Nasdaq is up by 56 pts and the Russell is down by 5 pts. The sense is that the market will not be surprised or disappointed… rates will go nowhere, and the support remains firmly in place.

Oil – is lower this morning – down 94 cts or 2.5% at $37.98… the API (American Petroleum Institute) reported that US crude inventories climbed by 8.4 mil barrels last week when they expected a drawdown of 1.7 mil barrels and all this does is revive the argument of oversupply and falling demand – an argument you know I think is flawed.  We continue to remain within the trendlines… support at $36.87 with resistance at $45.94.  Don’t overreact – watch what happens as the world opens… there isn’t one producer that wants to see oil trade back down into the 20’s – so they will do what they need to in order to keep oil within the range.  It will be interesting to see what the EIA (energy information administration) says today. Will they confirm the build or not?

S&P closed at 3207, down 25 pts from Monday’s close. Yesterday I said that “it feels like the market wants to erase the losses suffered since the crisis began” and the algo’s gave it a valiant effort, but in the end failed to take out the high of 3386. Today will be a pivotal day… what will the market interpret from the press conference? What will Jay say? Will his words be misinterpreted and cause a sell off or will they be misinterpreted and cause the rally to continue?

Or will he sing the famous Billy Joel Song – ‘Vienna’?

Slow down, you crazy child, You’re so ambitious for a juvenile, But then if you’re so smart, then tell me, Why are you still so afraid?  Where’s the fire, what’s the hurry about? You’d better cool it off before you burn it out, You’ve got so much to do And only so many hours in a day… when will you realize Vienna waits for you?

Either way – unless he explicitly says ‘rates are not going anywhere’ then watch as some will interpret that lack of verbiage to mean rates are going up. Capisce? We remain in the broader range of 3000/3386 (long term trendline support and all-time high resistance). But before we get to 3000 – I would expect to find some near-term support at 3150. 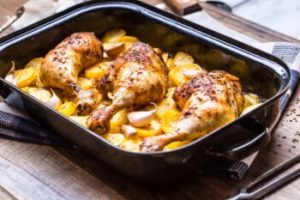 For Chicken lovers – this is a simple and easy dish… takes no time to prepare – yet gives you a hearty and wholesome meal.  For this you need:

Combine – the garlic, oregano, parsley and white wine (or broth) in a small bowl – set aside.

Season the chicken pieces with s&p… toss in a bit of olive oil (just enough to give it a glisten).  Do the same with the potatoes. Now add the chicken to the roasting pan – skin side down. Toss in the potatoes and arrange nicely. Bake for 20 mins… then turn, bake for 20 more mins… juices should be running clear now… if not – then cook for another 10 mins or so… Now pour the garlic/wine mix over the chicken and cook for an add’l 15 mins. The pieces should be browning up nicely. Turn to make sure both sides brown. You can always finish off by broiling – just make sure that you don’t burn the chicken or potatoes.

Remove and serve on a family style platter with a large mixed salad dressed in a simple oil/vinegar dressing.