Will the Bulls Defend the Market?/ Try the Watermelon & Tomato Salad 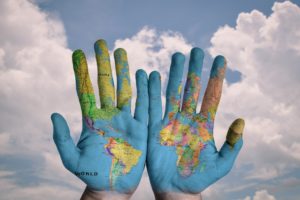 “I feel the earth move under my feet, I feel the sky tumbling down, I feel my heart start to trembling, Whenever you’re around, Ooh, baby, when I see your face, Mellow as the month of May, Oh, darling, I can’t stand it, When you look at me that way… I feel the earth…”

Stocks took it on the chin yesterday as the algos and some traders decided that maybe, just maybe, the market was just a bit ahead of itself (think stretched valuations) – as we are beginning to hear of an uptick in virus cases in some of the southern states that did not quarantine as much as the northern states did. To be clear, we are NOT hearing of an uptick in the Northern states… or in the states that just recently re-opened. But let’s be honest – the uptick in cases can also be attributed to the increase in testing – test more – you get more results and you realize that more people either had it or have it… What we are not seeing though is a commensurate increase in deaths – and THAT is important to consider.  Yes – the total number of US cases did pierce 2 million but the overall trend across the country is still lower and yes ‘global’ cases did top 135k daily –  but those are cases NOT DEATHS and every case does not end in death – in fact the death rate continues to fall as a percentage of cases. Somehow that statistic gets lost in the conversation.

The hot weather in the southern states is now keeping people indoors breathing recirculated air from the constant air conditioning… and that is being blamed for the increase… I mean 100+ degree days do not lend themselves to ‘hanging out’ outside. In addition, was the ongoing analysis of the Jay Powell presentation on Wednesday afternoon… It seems that some were not happy with the FED chairman – Jay Powell – blaming the negative tone and the rush to sell stocks squarely on him and the members of the committee – as if they did absolutely nothing… as if they walked away from the fight and chose to take their ball and go home…

Let’s just think about this for one minute… what did he really do? Did he tell us anything we didn’t already know? Hardly. Did he take away the Kool Aid? Not. Are they continuing the bond buying program that is nearly double the size of all the QE programs initiated during the GFC (Great Financial Crisis)? Yes. Did he make comments on how this recovery was going to be a bit longer and drawn out – as he thinks there was quite a bit of damage done to the US economy? Yes… Is he keeping interest rates at 0 for the foreseeable future? Yes… so tell me – What else do you want? Was any of that really new news? In the end – The FED remains dovish and concerned… Would you prefer he got hawkish?

Look – there has been a lot of damage to the internals of the market, the indexes suffered a swift and painful collapse in March, followed by a stair step rally taking the Nasdaq up to all-time highs with the Dow and S&P not far behind… and remember – the trek up is always in steps while the move down is always in the elevator. The technology allows for swift and decisive moves, while complex passive investment strategies (think leveraged ETF’s) run roughshod over the markets. And then you have the ‘smart algos’ that read the headlines and react to the words in those headlines in pico seconds… and then as the market came under pressure – it got a swift kick  from none other than Treasury Secretary Stevie Mnuchin… now he didn’t say anything wrong – but the algos didn’t like that either. In an interview on CNBC, he told the world that if the country should experience a surge in infections (i.e. the second wave) do not expect that the administration would pull the plug again… in fact, he said:

And as the day wore on – the media started to report of a rise in cases in Texas, Florida, Arizona – places that did not have large outbreaks to begin with and did not shut down to the extent that much of the rest of the country did and then they started to throw in Las Vegas and the casinos and then the cruise ship industry discussed further delays in their fall schedule and then the recent nationwide protests all adding to the markets angst – the assumption is that the second wave is coming… Second?  We’re still in the first wave…..the second wave can only come after we’ve seen the completion of the first wave and many will agree that we haven’t seen that yet… so just for emphasis – they moved that conversation from the back burner to the front burner and turned up the heat so that it too would boil over adding more fuel to the fire and when that happens – the algos go into overdrive – all rushing for the door – sending stocks down the drain as the buyers back off – preferring to buy stocks at cheaper prices because the sell algos were prepared to sell stocks at any price! So why buy stock at $60, when the algo is ready to sell it at $55? I mean this is NOT rocket science at all.

In the end – it doesn’t do any good to carry on about the “end of the world” drama… that is not helpful… and while it felt really bad yesterday – Even with the selloff in the last two days – the Dow is still up 11% in the last 4 weeks and up 37% from the March low, the S&P is up 36% from the March lows and is still up 8% in the past 4 weeks, the Nasdaq is up 38% from March and 8% in the past 4 weeks while the Russell is up 40% from March and still up 14% from mid-May. So, what’s all the fuss about? We are nowhere near the March lows of 2350 – in fact the S&P still has a 3 handle on it. Again, you have to ask – where were all of these concerns when the market rallied strongly over the past month?  When valuations got stretched and no one seemed to care as the focus suddenly turned to talk of new highs.  In the end – as we have discussed ad nauseum – the algos always cause the swings to go to extremes in both directions – on the way up and then on the way down… but no one seems to care about the ‘up swing’.

And then after the close – CNBC did an interview with Scott Minerd – Global Chief Investment officer at Guggenheim Partners… and he sounded even more bearish than Stanley Druckenmiller or David Tepper… he expects the market to not only retest the March lows, but to go further in the red falling to the mid 1600’s! (he did NOT attach a time frame to this call) Just FYI – that represents a fall of 45% from here!  Saying that, “the stock market is a bubble that will likely end in tears” – I don’t know – sounds a bit dramatic, but I guess anything is possible… My guess – the market now rallies strongly (again).

The perception of negativity (which I still don’t agree with) continued to infect the global markets… Asian markets fell – but by less than 1% so that’s a win as investors there reacted to the selloff in America… Analysts in that part of the world echoing some of the sentiment that the market needed a pullback, that the surge in recent weeks was overdone – based on what the macro data was telling us….And that the pullback was giving investors a new opportunity to pick up some good values.  By the end of the day – Japan -0.75%, Hong Kong -0.73%, China rose by 0.18% and the ASX fell 1.9%.

US futures are bouncing hard… recall that I identified key levels on the Dow and the S&P yesterday and the algos took those indexes right there… I said that the S&P needed to hold at 3000 and the Dow needed to hold at 25,120 – did you see where they ended the day? 3002 and 25,128! And this morning the bulls appear to be defending the position… Dow futures are up 625 pts, the S&P up 60, the Nasdaq +166 and the Russell is up 55. Dr. Gottlieb on CNBC talking more sense… telling us that we are much better prepared, we are doing more testing, and we are taking appropriate steps to deal with what is likely to be an issue for the foreseeable future. Unless and until we get a vaccine or real treatment plan – this is not going away, so we will have to deal with it. There is no eco data that will drive the moves today… the focus will be on the bounce off the yesterday’s lows and maybe just maybe a realization that nothing has really changed in the broader picture. As usual, expect the algos to overreact as they try to find a state of equilibrium.

All of the names that got slammed yesterday are already significantly higher in the pre-market. Airlines, Cruise ships, Energy, Financials, Communications, Real Estate all pointing up… In the end – stick to your plan, find solid names that are paying good dividends, take advantage of the dislocation in seasoned names as you continue to tweak your portfolio given the recent turmoil. Talk to your advisor.

S&P closed at 3002 and is looking at a higher opening… this morning it appears that the Jay Powell conversation is over and that the reinfection rate is no longer causing the markets to shudder… recognizing that the retracement can be explained by the explosive move up in the last 10 weeks… I do not think that this is the beginning of the end at all… In the chaos there is always opportunity… just sayin’. 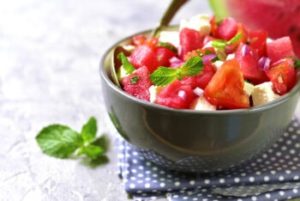 Enjoy this refreshing and delicious Watermelon and Tomato Salad… The colors, and freshness of this chilled salad will make any summer dinner table a pleasure to look at and more so – a delight to eat.  If you have never had this salad – you have to make it… and if you have had it then you can appreciate the simplicity of it.

Cut the tomatoes in half and then slice the halves in slices (you understand what I mean – no?). Next slice the watermelon and cut away from the rind… cut into cubes and place a large bowl. Now add the tomatoes, crumbled feta and chopped fresh mint… Drizzle with Olive oil and a splash of Balsamic – season lightly with s&p… (you can also hit it with a smidge of sugar)… cover and place in the fridge to keep chilled. Spectacular.