The FED to the Rescue!/try the Scampi 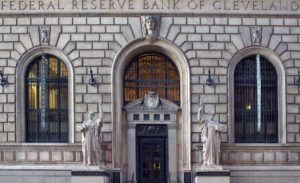 Did someone say ‘bounce’?  Stocks opened sharply lower on Monday on fears of a re-emerging round of new infections in both China and in the US… extending the pullback that has gripped the markets. As the opening bell rang – the Dow immediately plummeted 800 pts, the S&P fell 76 pts, the Nasdaq lost 185 pts and the Russell lost 44 pts – setting us up for what appeared to be another fairly tough day…

But as the S&P pierced its near term trendline (3014) and the Dow tested its intermediate term trendline (25,049) – the bulls had another idea… Enough of this drama – the infections in the US – while ticking up, yes… was not unexpected. We have been discussing this – as the number of tests rise then the number of infections is sure to rise and that would be true anywhere in the world… test more, find more – period. But again – what we are also finding is that as the number of infections is ticking up, the number of deaths is ticking down – in fact what is the ‘daily death count’? Not hearing that stat much more these days vs. in April when that was the daily stat headlined the papers and the news… the WHO (World Health Org) reports that on April 12th –  there were 81k new global daily cases and 12,600 global daily deaths (15%) – and on June 12th – they report 137k new global daily cases and only 4200 new global daily deaths (3%).  A dramatic turnaround – in both newly diagnosed cases and deaths… now I am not downplaying the deaths at all, what I am pointing out is that the stats have reversed – the curve is flattening and the moves to address this pandemic have been successful. Have we completely succeeded? No, but have we made huge progress? Yes.

Now in hindsight – if you look at the chart – you see this slow but steady move back to the unchanged line – as if someone knew something, as if the market was expecting some kind of announcement – and then at 2 pm it happened!  The FED comes to the rescue again! In a sort of surprise announcement – the FED came out and told the markets (investors/traders and algos) that they are now prepared to buy corporate bonds in the secondary market. Recall that earlier this spring (March 23rd) – the FED announced that they would buy bonds (via ETFs) in the primary market and on April 9th they announced that they “MAY” consider buying bonds in the secondary market if they felt the need. So, on May 9th part one began and today part two begins.

Apparently they felt the need and that is what yesterday’s announcement was all about… this just closes the loop and is just another ‘backstop’ for the financial markets that is aimed at bringing calm to the investor psyche. And while the market reacted positively – you have to ask – What does that action really say about the current state of affairs? Is someone still playing ‘I’ve got a secret’? We are about to find out – because Fed Chair Jay Powell is due on Capitol Hill this morning as he appears before congress for the next two days… today in front of the Senate and tomorrow in front of the House in his semi-annual address to congress – so expect this to be discussed ad nauseum. This new $250 billion fund is set to buy corporate bonds that are based on a broad index of diversified corporate bonds – bonds that are in the $9.6 trillion corporate market that satisfy a range of criteria. Either way, it is what it is and the algos loved it. The Dow swung 1000 pts from low to high, the S&P swung 114 pts, the Nasdaq swung 353 pts and the Russell swung 82 pts.

As the sun rises over the Atlantic – Dow futures are up 530 pts or 1.7%, S&P’s are up 38 pts or 1.3%, the Nasdaq is ahead by 126 pts or 1.3% and the Russell is ahead by 32 pts or 2.2%. Now they were higher but then news overnight that North Korea’s ‘Chubby’ (Kim Jung Un) is once again causing trouble caused the markets to back off a bit – he blew up an ‘inter-Korean’ liaison office on the border between North and South causing anxiety levels to rise but let’s be clear –  this is not a market-moving event right now at all, but it was a reason for futures to back off a bit.

Trading in Asia sent stocks higher across the board… In addition to yesterday’s Fed announcement – the RBA (Reserve Bank of Australia) released their latest minutes – and in it they confessed that the “the substantial, coordinated and unprecedented easing of fiscal and monetary policy in Australia was helping the economy through this difficult period.” Well, there you go… now it’s confirmed – substantial, coordinated and unprecedented amounts of money are helping to ease the pain… who would have thought!

In the next statement – they revealed that all of this fiscal and monetary support would be required for some time and the understanding is that they are prepared to offer it.

In Japan – the BoJ (Bank of Japan) left their main policy tools in place saying that the Japanese economy is likely to remain in a severe situation for the time being due to Covid 19 – thus they too are prepared to leave the spigot in an on position. And so by the end of the day Japan gained 4.8%, Hong Kong added 2.4%, China advanced by 1.5% and the ASX added 3.9%.

European markets are now open and they too are UP substantially… as investors there celebrate all of the good central bank news… and the idea that Trump is outlining a $1 trillion infrastructure program – because this will help the US economy and then trickle down to help the European economy. In the UK – PM Bojo (Boris Johnson) signaled that a BREXIT deal is possible as soon as July – do we even remember what BREXIT is? (British Exit from the EU). In Germany – the ZEW economic survey is due out later today. Beyond that, there is nothing else that is expected to move markets. Later in the week (Thurs) we will get policy decisions from the Swiss National Bank and the BoE (Bank of England). As of 7 am – the FTSE is +2.4%, the CAC 40 + 2.6%, DAX + 3.19%, EUROSTOXX +2.7%, SPAIN +2.7% and ITALY + 3.2%.

Eco data today includes– Retail Sales exp of +8.4% m/m, Ex autos and gas of +5.1%, Industrial Production exp of 3%, Capacity Utilization exp of 66.9% (still well in contraction territory). Any improvement in any of these numbers will only help the feel-good mood today.

S&P closed at 3066 after yesterday’s initial plunge lower that took us under the trendline but left us above the trendline by 4 pm. The market is attempting to find stability but will remain a bit volatile until we get more clarity on the virus and until we hear what else the FED will say to congress. This morning it is the Senate Banking Committee and tomorrow it is the House Financial Services Committee – as usual expect to be frustrated with the questions… remember – they are all created by senate staff members that have little to no understanding of fiscal/monetary policy and how it affects investor psyche. Investors will react to how and what Jay says vs. the questions he is asked. 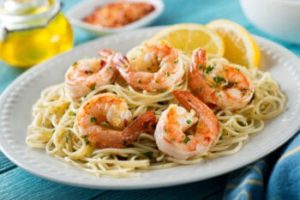 In a sauté pan – melt butter and add a splash of olive oil, add crushed/sliced garlic……and sauté….keep heat on med so that you do not burn the butter or garlic…..add the juice of one lemon, complement with some white wine…about 1/4 cup…in pan – and a wine glass full for you – turn heat up to high… next add shrimp, s&p and sauté quickly until nice and pink on both sides… no more than 5 mins…

Strain pasta – reserving a mugful of water – add pasta to sauté pan – mix and serve… You may need to add back a bit of the pasta water to keep moist -as the pasta sucks up the juice… Serve in warmed bowls, top with some toasted breadcrumbs and fresh grated cheese.