Canary in the Coal Mine/Try the Pan Seared Halibut

Wow!  So a couple of weeks ago – I said that I thought the S&P would test the pandemic highs of 3220 BEFORE it would test trendline support at 3025… I also said that the market appeared to be struggling with 3200 as we approached the earnings season – as investors were not sure what to expect… well, yesterday we blew right through not one but BOTH levels on the S&P as the day began…

Coming into the day – after a another weekend of surging virus cases – market centers around the world were all in Risk On mode – news that Pfizer and German bio-tech BioNTech were fast tracked by the FDA to produce not one but two virus vaccines for testing apparently sending the algos into overdrive around the world… More talk of something happening (think vaccine) by the fall from one of these pharma/bio-techs that we have been discussing only added fuel to the fire… Asian markets – which lead the trading week – were all in positive territory even as the headlines spoke of a ‘virus out of control’ in America, and what this meant for the US and global economy.  Oil – came under just a bit of pressure as the story once again focused on the perceived falling demand that is sure to result and Gold rallied hard as the sun moved across the sky… and then as the sun set on Asia – it rose across Europe and investors there jumped on the bandwagon – seemingly unaware of (but not really) the spike in cases across some of the reddest states in the country and what that could mean for the next move around covid 19; what that might mean for the upcoming election. Instead – Investors/algos focused on the PFE news and what was about to be the beginning of the beauty pageant – Earnings.

And then it began with Pepsi (PEP) at 6:30 am… now while PEP is not a Dow stock, (Dow stock JPM is considered the true start of the cycle) it is a significant US/Int’l name… earnings were expected to be $1.25/sh but we soon learned that analysts had underestimated the resolve of global citizens to want to eat ‘salty’ snacks as we were all holed up in our homes… earnings came in at $1.32/sh – beating the estimate by a healthy 7 cts… nothing to sneeze at for sure… and so it began… that positive report, along with all of the analyst commentary that maybe this earnings cycle would not be a dreadful as expected… and this gave US futures another kick in the pants and before you knew it – the day was setting up for a Monday morning surge… The S&P gapped up 18 pts on the opening – piercing right through 3200 – going positive on the year as it made its way to an all-time ‘pandemic high’ of 3235 – rising 55 pts by early afternoon… and the others followed suit – with the Dow rising 560 pts, the Nasdaq surged by 208 pts making its Monday high at 11:40 am (and this is important as you’ll see) and the Russell – rose 30 pts… Analysts/portfolio managers and big bank risk managers all cooing about how resilient the market is… every sector in the green as the algos celebrated a new pandemic high…

Now – go back to the Nasdaq – an index that has soared beyond explanation with tech names that have all risen in a straight line to the occasion… as the world fought this virus.  WFH (the work from home ETF) launched back in late June had only gone UP every day since its launch and did again yesterday morning on the opening… but soon after the bell stopped ringing – this 21st century ‘stock’ began to wobble – was it about to tell us something different? Was it now the canary in the coal mine? I say this because – while the markets appeared to be in overdrive – something was brewing – first it was the WFH names like: Crowdstrike, Zoom, Box, Twilio, Amazon, Palo Alto, Plantronics, Adobe, Slack and then it was the broader Nasdaq market – with leaders like the FAANMG stocks – Facebook, Apple, Amazon, Netflix, Microsoft and Google (the M is silent in this case) all suddenly weakening, unable to continue to carry the load… and the Nasdaq began to weaken… as the other 3 marched on, well into the early afternoon… While the media was focused on all the excitement something appeared to be raining on the parade… Was it the new high that tech was making? Was it stretched valuations as some of these tech names have done nothing but go straight up? Had the algos gone nuts?

And then at about 1:40-ish… word that CA Governor Newsome was closing all the LA schools and the small businesses again – restaurants, bars, gyms, hair and nail salons etc.… leaving big box stores alive and well – think Home Depot, Lowe’s Costco etc…. as he is trying to control the spread of the virus… and this sent shivers through the market. But here is a question – once again the state is punishing the little guy while rewarding the big guy… I mean – the virus doesn’t spread at places like HD, LOW or COST? Is someone kidding me? And suddenly the algos went into overdrive – buy orders got cancelled and sell orders flooded the markets… by the end of the day, the S&P swung 80 points – ending the day DOWN 29 pts, the Nasdaq swung 400 pts from high to low ending the day down 226 pts and the Russell swung 50 pts – ending the day down 20 pts….The Dow – while also coming under pressure – lost 540 pts to close up 10 pts…

I mean – come on – this can’t be a surprise, Can it? Just look at what the market has done, look at what some of these stocks have done? Look at what the economy has done, look at the continued weak macro data, look at the state of the union. Look at how stretched the valuations are – valuations that many analysts explained away because rates are zero – so where else can you go? Valuations that became over extended because of all the central bank stimulus that we’ve seen and valuations that supposedly reflect the economy 6 months out… and while all that is true – remember – there is always a reversion to the mean… and there is always a US election…

So today – is the official start of earnings season… we are due to get numbers out JPM, C, WFC and DAL. What will we hear? What will companies say about margin pressures, dividends, capital investments, and forward guidance? We are about to find out… Now remember – earnings estimates have already been slashed, the market is prepared for the worst, so none of this should or will be a surprise at all, but since the market has surged as much as it has, I would not be surprised to see it back off as these reports hit the tape.

On top of everything else – tensions between the US and China continue to simmer on the back burner… and this will surely be part of the upcoming election talk… along with higher taxes, and more regulation – so expect the volatility to continue – especially if we see more states begin to shut down their economies again as the virus continues to spread. Look – we are going to get something… either a therapeutic treatment or a vaccine – it just depends on when – will it be the fall? The winter? Next spring? Either way – the market is discounting the virus now – as it assumes there will be a treatment that at the very least will make this more like the flu rather than a death sentence.

Investors are beginning to wonder what the next risk is… Is it earnings? The election? The virus? The FED? Margin pressures? Dividends?  Is it legislative risk? Is it regulatory risk?  Is it political risk? Is it economic risk? It’s ALL of them… every one of those risks presents an issue for the markets… Which is why you have to stick to the plan and call your advisor. Discuss your options.

US futures are up! Dow futures are +78 pts, S&P’s are up 8 pts, the Nasdaq is up 11 pts and the Russell is up 9 pts. JPM is helping to change the mood and once Jamie speaks – everything will be ok… C and WFC due to report before the bell.

Oil is off again as they build a story around the re-closure of US states… Think CA. Word is that CA uses so much oil and Californian’s use so much gas that any shutdown of that state is sure to hit the oil markets hard – Are you kidding me?  That is a ridiculous argument… Later today we will get data form the American Petroleum Institute – so let’s see what they say… estimates are looking for a decrease in gasoline of 900K barrels and crude of 2.3 mill barrels… and with demand coming under pressure because of a surging virus – many are now asking what OPEC will do next – will they keep the cuts in place or will they ease up – flooding the markets with more supply? We remain in the $35/$45 range that we have been discussing.

On Friday – I said that the S&P is struggling with 3200 as we await the beginning of earnings season… which starts on Tuesday… and while everyone expects another disastrous season… most analysts have already written it off – and instead are turning the conversation to 2021… The S&P closed at 3155 last night… remaining in the 3120/3230 range. Again – now that we tested the pandemic high – could we ricochet off of trendline support? Certainly not out of the question by any stretch. 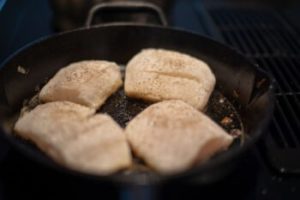 Salt the top of the fish with just a small sprinkle of kosher or sea salt.

Place ½ of the butter and a splash of olive oil in a medium to large skillet or sauté pan and heat over medium heat.

Swirl the butter and oil around and once it starts to slightly brown, add the fish top side down. Sprinkle the side facing up with the rest of the salt and the pepper. Cook for five minutes then gently flip.

Add the lemon slices to the pan as the fish cooks and cook the fish about 3-5 more minutes. You want to stop the cooking just before it fully cooks – It will continue to cook outside of the pan.

Remove the fish and place on a platter along with the cooked lemon slices.

Keep the heat at medium and add the garlic and cook one minute. Add the wine and cook to evaporate. Then add the lemon juice, capers and parsley. Cook for a minute then remove from heat and stir in the remaining 2 tablespoons of butter and stir to make the sauce.

Put the fish back into the pan along and cook for 30 seconds then remove to a platter and serve.

Serve each portion with a cooked lemon slice and some of the pan sauce. A side of mashed potatoes and mixed green salad works well with this.