Tech to the Rescue! Try the Veal Polpettone

While some companies appear to be ‘crushing it’ – remember that the estimates had been cut and slashed to the bone… of the 300 companies that have reported – 85% have beaten the numbers by as much as 22% and THAT is well ahead of the average. Compare that to the first quarter when we saw 70% of companies beat – they beat by an average of 3% and one year ago – 75% of companies beat but only by an average of 5% – so this quarter is shaping up to be a bit different. Since early July – when earning season begun – the Dow is up 2%, the S&P is +2.5% and the Nasdaq is up 4.5% and the Russell is ahead by 5%.

So – now the question is – what happens next? Virus cases are once again surging – around the world, talk of vaccines and new therapies remain the topic du jour, continued remote learning and working are also a concern and remain at the top of the conversation as well with both sides remaining passionate about what to do next. Parents struggling with balancing work and trying to accommodate the classroom are finding it more and more difficult. Kids that have been removed from the socialization of the classroom and school are now showing signs of struggle… Yes, zoom may be helpful for learning, but does absolutely nothing for the socialization process at all. The concern continues to be the emotional and psychological hit that so many are feeling now and those that will get hit in the months ahead.

Next up – what will Biden say? Who is the pick – and while the field was full – the truth is we must understand who is ready to take over in the event that Joey falls ill (which is a very real concern for so many). Who is he comfortable with and who would make the right partner? Again – he has promised and the DNC has promised that we will find out this week – my gut still says – Susan Rice – she is an Obama Administration alum, she is more than qualified, and she and Joe have worked closely together – something that the party and the country will need to feel good about… but hey – It ain’t over ‘til it’s over… so the clock ticks. We can though – rest assured the Lizzy has been eliminated from the group… although she is sure to push for a cabinet position – unless the DNC convinces her to stay active in the senate since they are assuming a Democratic sweep.

This week – is the wind down of earnings… so expect to hear the last few dribble out – but the reality is – many investors have now put the season behind them as they once again focus to the broader macro data which includes Markit US Manufacturing PMI – exp of 51.3, ISM Manufacturing – exp of 5.35, Construction Spending of +1% – all today… later in the week we will get Factory Orders, Durable Goods, Markit US Services PMI, ISM Services PMI  and two employment reports! Wednesday brings us ADP employment – expectations of 1.2 mil jobs created while Friday’s Non-Farm Payroll is expected to show an increase of 1.57 mil jobs created… Unemployment is expected to drop to 10.5% while Under employment is expected to remain in the high teens.

Tomorrow the RBA (Reserve Bank of Australia) is expected to announce their latest rate decision – no change is expected and the BoE (Bank of England) is due out on Thursday.

Overnight – China told us that Manufacturing activity rose in July – as the Caixin/Markit PMI came in at 52.8 – better than the expected 51.3… but again – you have to believe what the Chinese Communist party says – that market added 1.6%… Japan surged by 2.2%, but that was a bounce off of the 3% decline witnessed on Friday… Hong Kong and ASX both ended the day lower… down 0.56% and 0.03% respectively.

European stocks are all in positive territory… IHS Markit Manufacturing PMI revealed that manufacturing activity rose in July to 55.3 – or 7 pts better than the 48.9 reported in June and the first positive read in 17 months… and remember – any PMI reading that is greater than 50 suggests expansion – so that should mean that the global economy is on the mend.  Investors there are also paying attention the upcoming US macro data – as they should reveal the state of our union.  At 7 am – the FTSE +0.45%, CAC 40 +0.95%, DAX +2.00%, EUROSTOXX +1.44%, SPAIN flat and ITALY +0.53%.

US futures are up in the pre-market…Dow futures are +70 pts, S&P +14 pts, the Nasdaq +90 pts and the Russell is ahead by 10 pts. Concern over a new economic stimulus package continues to dominate the conversation. WH Chief of Staff Mark Meadows telling us that he was ‘not optimistic’ about any deal being reached this week. And yesterday – we heard from Debby Birx – the WH top infectious disease expert who told us that the virus has ‘entered a new phase in the US and is now extraordinarily widespread in both cities and rural areas’ – this is expected to put some pressure on the talk of that V shaped sharp recovery. And yesterday on Face the Nation – Minneapolis Fed President – Neely Khashkari advocated for a 4 – 6 week total (nationwide) shutdown saying that congress has plenty of money to spend to support the country. And while we all hear that MSFT wants to buy the US division of TicTok from the Chinese company ByteDance – there is still so much to discuss. The big concern here is that the data which users create is all stored on servers in China – allowing China to gather all the information from the 800 million active users worldwide – although that is disputed by the Chinese… (laughable…)

We are now in the dog days of summer – August tends to be a volatile month – most of Europe on vacation and most of the US on vacation from the 15th through Labor Day… although – this year – it might be different. Less travel, less camp, more staycations…

Oil is under pressure -down 30 cts at $40.01 – after having tested as low as $39.58… someone starting to raise concerns over the increased production we are going to get out of OPEC and OPEC +  as well as the expected increase in shale production as oil prices rise all this just as the virus begins to rear its ugly head again… July saw OPEC increase production by 1 million barrels/day while the Russians left production at June levels. August production is set to increase by a total of 1.5 million barrels/day – but this is not new news at all… the market knew this last month and still oil rallied as so many analysts spoke about how demand is alive and well and how a recovering economy will boost demand. All this talk of national lockdowns around the world is the new piece of data that the market was not expecting… And while I understand that – we remain in the $35/$45 range.

Gold – is trading at $1,987 churning in line after its recent move higher… the dollar strength today being held responsible for the stall up and thru $2,000/oz. Pay attention to the macro data and news out of Washington. Fed Speak will also drive sentiment in this commodity… in any event – I would not be chasing gold here – just fyi.

The SPX closed at 3271… It feels a bit tired here… and while futures are up this morning, my guess is that the path of least resistance in lower and not higher… I suspect it will try to test 3300 but it will not succeed at the moment. Again – stick to the plan, talk to your advisor and stay awake. 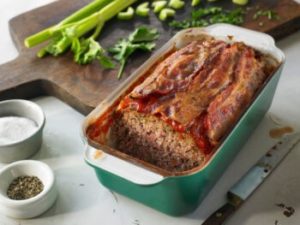 This is a great dish.

It is a veal meatloaf – but unlike a regular beef meatloaf – this one is stuffed with fresh grated Parmegiana, scrambled eggs and cappicolo – seasoned with s&p and then bathed in white wine at the end… It looks beautiful when sliced and presented. Now on Sunday I made it and used 2 lbs of ground veal – so that I ended up with a nice size veal loaf – and could have fed 6 adults. As a result I had to change the amount of ingredients – so if you are going to make only 1 lb of veal – then adjust accordingly.

For this you need: garlic cloves – sliced thin – (I used 6), 8 Eggs, 5 cups of fresh grated Parmegiana – (On Sunday I didn’t have enough Parmegiana – so I mixed in 2 cups of fresh grated Pecorino Romano – delicious), s&p, Olive oil, butter, chopped cappicolo – (I used about
1 cup) and finally the dry white wine – nothing fruity. The recipe also called for chopped parsley -which I eliminated – more for color than taste.

Begin by mixing the garlic, veal, cheese, s&p and 5 of the 8 eggs.  – Now go easy on the salt – because the cheese can be fairly salty – so I would err on the side of less salt when mixing – (you can always add a bit when you eat it) – then set aside. Now take the remaining 3 eggs and scramble them – melt about 1 tblspn of butter in a frying pan and over low heat add the eggs – let them set – rolling the pan a bit to get the eggs to set.  Now flip the eggs to cook the other side.  Once done – remove and slice into strips.

On a long piece of wax paper – lay out the veal mix and form into a rectangle about ½ thick. With 2 lbs of meat – you will have a nice size rectangle. (Using the width of the wax paper as a guide – spread the mix lengthwise). Now spread the cooked eggs and the chopped cappicolo over the meat.  Using the wax paper – slowly roll into a loaf.

After 45 mins – add the wine – I used about 3 cups – pouring it generously over the veal loaf so that it was bathing in the wine – not drowning in the wine.  Return to the oven and cook for another 15 mins. Remove and let it sit for 3 mins – slice into generous portions and serve hot.  I served it with sautéed baby peas and a large arugula salad simply dressed with s&p, oregano, olive oil and fresh lemon juice.