The Roof is Getting Blown off the House/Try the Perciatelli

So if you weren’t confused yet about the corona virus task force – then sit down because it just got more ridiculous and obscene… Enter stage left – Mike Lindell… oh yeah – you know him, you’ve see him and you’ve heard him… Hint:  “Mypillow.com” What? You ask – Not sure, I say – Mike Lindell is a scientist, a doctor, an epidemiologist? Who knew? And who knew that Oleandrin was the magic bullet to defeat the virus that has swept across the world and the country… I mean you just can’t make this up – who would ever believe it???

Ok – so lot’s going on... The S&P finished just shy of creating that new record, the Dow took a breather, the Nasdaq powers higher still (marking its 33rd record close this year) as the Russell continues to play catch up  – is anyone else exhausted yet with this headline? You may be – but technicians are not at all – just because it’s another new high and it supposedly speaks to the health of the economy… Oh boy – we can have a field day with that… because while this move suggests better times ahead – it is the time right now that is confusing, frustrating and so difficult for so many.

And let’s not forget – the stock market rally has been driven by the extraordinary stimulus out of the FED and the administration… and with rates at zero and expected to stay at zero for at least another 16 months (as promised by the Fed Chair himself) … we are left with that TINA syndrome (There is No Alternative). So – as I mentioned yesterday – investing is a dynamic process, it is not static – you don’t’ just create a portfolio and then walk away… and that was the focus of the story yesterday… As the market rallies – different sectors rally as well and that creates an imbalance in your portfolio – so all this means to you is that you need to look at and discuss with your financial advisor any risk or overexposure you may have to some of the sectors that have outperformed. Barron’s led with a ‘Sell you stocks now’ kind of story which we discussed was just a bit of histrionics…

It’s not about selling your stocks at all, it’s about being focused, being in the know and being aware of the imbalances that this rally has created... Tech and Retail both continue to power higher (and that’s not bad) and are just two of those sectors that needs your attention and the move higher does not suggest at all that you abandon this trade – but what it does do is cause you to examine this trade to make sure that it has the appropriate allocation within your portfolio based on who you are (think age), what your risk profile is (think conservative, moderate or more aggressive) and ultimately what kind of an investor you are – are you more long term focused or are you more short term focused… so while the story does make a few good points – it is not an article that should cause you to panic – and in fact – no one was panicking yesterday at all…as investors/traders and algos took  the Nasdaq and by default the TECH sector ETF (XLK) higher. In fact – we saw Consumer Discretionary, Consumer Staples, Communications, Healthcare, Retail, Real Estate and Basic Materials all higher… while Utilities, energy and industrials took a breather.  By the end of the day – the Dow lost 86 pts or 0.3%, the S&P added 9 pts or 0.27%, the Nasdaq gained 110 pts or 1% and the Russell added 7 pts or 0.48%.

This morning – there is a lot to consider… the DNC launched their virtual convention last night – and I am sure that there will be plenty to discuss this morning about how that went, what it means to corporate America and what it means to all Americans as we prepare to vote in less than 87 days…

In addition we just learned that Home Depot (HD) surprises analysts by reporting earnings of $4.02/sh vs the expectation of $3.66… essentially – the ‘blew the roof off the house’ (pretty cool, no?) beating the expectations by 10% while Revenues surged by 25% – the stock was up 2.7% yesterday (in anticipation) and is up another 2.8% this morning in pre-market trading… Now while I love HD – it is now trading at all-time highs – possibly creating yet another imbalance in your portfolio (if you own that as an individual investment) so you need to take a look and potentially peel back a little bit to keep it in line… Expect to see asset managers do the same as the price surge will also create imbalances in their portfolios forcing those asset managers to consider raising some cash – even as others pile in… and those others are asset managers/retail that may be under invested in the name… so – don’t be so concerned about what everyone else is doing – you should be doing what you need to do to keep your portfolio in bAnd WMT – they just reported $1.56/sh vs. the expected $1.25/sh… and that stock is now trading up $8 or 6.4% in the pre-mkt – after having closed at a new record high yesterday… leaving investors to consider what to do now… Stay with it or peel just a few shares off to ring the register and play with the ‘houses money’.

And remember – both of these stocks HD and WMT are DOW components and S&P components so the pre-mkt moves have now caused futures on both of those indexes to surge…  See more below.

As you know – Nancy has called everyone back to DC to hammer out an emergency bill that will stop the USPS from making any changes at all to their structure until well into the new year… lots of talk of voter suppression etc… forcing Democrats to raise the roof as well. This will put the ongoing stimulus discussions front and center – so let’s see if the elected officials can come to a reasonable agreement that will benefit the country and not just their political wills…And this does not appear very likely at all….in fact – in her own words – the two sides remain ‘miles apart’ and the losers here are the many Americans that have been unduly suffering as a result of the shutdown, closure and ultimate failure of small businesses….balance and appropriately invested.

And the DNC convention – kicked off with some of the usual suspects – think Sanders, Cuomo and Whitmer – but the encore performance by Michelle did bring down the house for the party and their supporters – as she used Trumps own words against him – “It is what it is…” Expect that soundbite to gain speed and momentum in the social media space as the tag line #ItIsWhatItIs blows the roof off of Twitter as well. I will say that what we did not hear was all that garbage about blowing up tech, or energy or re-regulation of the financial industry at all – but tonight does feature NY’s AOC (let’s hope she gets all of 1 min) – and we can expect her to scream about how out of balance the economy is and why every billionaire needs to give up their wealth so that the DEMS can re-allocate as they see fit… as she urges the nation to ‘go left’. Not High as Michelle suggests but Left.

US futures which had been teasing higher have now jumped even higher post the earnings announcements... Dow futures are now up 80 pts, S&P’s are now up 9 pts – which will take us up and thru 3390 – leaving 3400 well within sight… and remember – that’s just another century mark that needs to be broken… The Nasdaq is adding another 42 pts and the Russell is ahead by 6 pts. So between those reports, new news on vaccine efficacy, increasing tensions between DC and Beijing. more stimulus and last night’s DNC convention – there is not a lot of negative headlines to focus on – unless of course you turn the convention on its head trying to tear it apart… Which I suspect some will try to do during the day….but investors appear to be voting with their dollars at the moment – which does not mean this can’t all turn around – in fact – I hope it does because it is feeling a bit extended… so get ready… stick to the plan and talk to your advisor.

Gold rallied hard yesterday – much of that – a Warren Buffet Trade – after he announced his investment in GOLD (Barrick Gold) +3 pts or 11% which pushed gold up and thru $2000/oz again… This morning the party continues… Gold is up $13 to $2012/oz as the digestion continues after that announcement. So many investors (mostly retail) will follow Warren into his latest trade in a cult (herd) mentality… it is what it is… Remember – gold is a safe haven trade and with the markets teasing all-time highs and the virus continuing to ravage the country ahead of the fall season which will see an increase in the flu – it makes sense to have some money in this asset. It feels like $2040 may be a short-term move.

This morning the S&P is at 3381 – once again teasing the all-time high of 3386… And like I said yesterday… It doesn’t feel like it was going to pierce it (yesterday) but today is a different story… Not only will we pierce it – but it feels like we will make a new closing high as well. And it might have 34 handle on it. Remember – vacations are in full swing – volumes are lower which can prove to create more exaggerated moves in the markets… take advantage of those moves… and re-allocate if appropriate.

Much will depend on the chatter today consider putting in sell orders just above the market and buy orders below to catch any ‘reactionary’ moves while you are away. Again support can be found in the 3330 range and if that fails then its 3275… but I am not saying we are going there right now… just laying out the landscape. Resistance is now up for grabs… as it appears that 3386 is all but a memory… 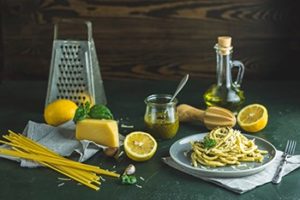 This is simple yet delicious… I mean – it takes only 10 mins to make… as long as it takes to boil the pasta.

Bring a pot of salted water to a boil – add the pasta.

In a large sauté pan – slowly melt two sticks of butter on med low heat… once melted add in fresh squeezed lemon juice – stirring as you add… now – taste as you go…you do not want it to be all lemon – just enough of a hint so that you know it’s there.

In a separate pan – toast the sesame seeds – do not BURN – just toss and toast – now set aside.

Once the pasta is done – strain (reserve a mugful of water) and add to the butter/lemon sauce. Toss to coat. Now add in 2 handful of grated Pecorino Romano cheese and the toasted sesame seeds – toss and serve immediately… It is a great summer dish – Simple.