The S&P Closes on a New High – Now What?/Try the Linguine

OK – so it’s done… The S&P finally pierces and closes at a new high, the Nasdaq like clockwork also closed at a new high – but this isn’t new news… it’s been doing that on a regular basis lately. Wal-Mart sales surge, Home Depot sales surge, both report strong numbers as the pandemic took hold of the country – more retail earnings today and the expectation is much the same. Both stocks sold off and ended the day lower – recall my observation from yesterday that while the numbers were great – retails stocks and the sector has surged over the past 4 months in anticipation of better earnings… causing so many of these names and the sector (XRT) to trade at new all-time highs… creating potential ‘imbalances’ in asset manager/individual portfolios… And then what?

TGT and LOW’s just announced and guess what? They also blew the roof off the house… beating all analysts’ expectations by a wide margin… expect to hear more about how the virus has benefitted the retail sector – suggesting that the consumer is alive and well.

Expect to see asset managers re-balance – which means ‘sell’ some of the positions in order to bring the portfolio back into balance… which then will raise some cash that needs to be re-invested somewhere else… (or it can be just put on the side for now if they so choose)… and so it goes… both of those names and the ETF all ending the day lower… XRT – 0.78%, HD – 1.12% and WMT -0.70%  – but none of this should cause panic – remember these same names are up substantially over the quarter – so ringing the cash register and taking some money off the table in those names is just good money (risk) management, Period.

On the virus front – the debate continues... talk of vaccines, talk of continued measures to protect the nation remain front and center… Colleges and University’s set to open – some going all in, while others remain remote… and with the fall coming – some doctors are warning of a ‘Twindemic’ – both a new strain of the flu coupled with the continued battle over the coronavirus… CVS is already offering flu shots here in Florida – and I am assuming that is true around the nation – trying to get people to ‘get protected’.

The chaos in DC rages on as Nancy and Chucky come back to Washington to ‘try and hammer out a deal’ with the GOP – with little luck – and postmaster general DeJoy has made it clear in a WSJ article this morning that he has no intention of changing anything (think removing equipment or cutting hours)  ahead of the election – in fact he said that:

“..to avoid even the appearance of any impact on election mail, I am suspending these initiatives until after the election is concluded… The timely delivery of the nation’s mail is a sacred duty and that the USPS is suspending operational changes, such a s removal of mail processing equipment and collection boxes, until after the November election…”

And immediately Nancy attacked the postmaster general saying that:

“This pause only halts a limited number of the Postmasters changes, does not reverse damage already done and alone is not enough to ensure voters will not be disenfranchised by the President this fall.”

And so it continues… Then the Democrats formally nominated Joey for President and Jill took to the airwaves gushing over how great her husband is and why he would perfect for the country at this time… Nothing unexpected there – did you think she was gonna slam him?

I will say that the opening Keynote address last evening was enlightening… it showed off nearly 20 of the newest elected members of Congress and Mayors around the country that represent the face of the ‘new Democratic party’… It was a show of diversity and new commitment in what appeared to be mostly middle of the road, moderate reasonable officials… that was until AOC took to the airwaves supporting Bernie for President representing the FAR LEFT in what they call the ‘Progressive Wing’ of the party… in her 90 second appearance she managed to malign the ‘explosive success’ of a few (Bezos, Musk, Walton’s, Cook, Gates, Nadella, Zuckerberg, Sandberg, etc.) at the expense of the many… This is an attempt to justify why she thinks she is entitled to raid their bank accounts in a ‘Robinhood’ type of strategy… I mean recall how she led the fight to force Amazon OUT OF NY… because she completely misunderstood the deal that the city and state made with Bezos to bring thousands of new well-paying jobs to a part of the city that she represented that would have benefitted from the surge in new construction and other businesses. (Which begs the question – where was Chucky?) But that’s another story.

Tonight – Kamala will be introduced and will accept the party’s nomination as VP – word is that she will re-introduce herself in this new role and suggest that she is ready to step up and move into the White House in the event that she needs to do so… Hmmmm… now that’s a bit curious… No?  Let’s leave that on the back burner for now.

Overnight – stocks in Asia ended the day mixed to lower… Japan exports plunged by 19.2% y/y but beat the expected 21% decline… which caused investors in Japan to take that market up – ending the day +0.26%. Concern over Australia/China relations now taking center stage as the mood sours… this time it is about wine… Really? Wine? By the end of the day – China lost 1.5%, Hong Kong fell by 0.74% while the ASX gained 0.7%.

Stocks in Europe are off to the races… there is no significant macro news or earnings news so investors there are reacting to ‘where else are we supposed to go?” And while they are following the virus news, US/China relationship/trade news, and US political news – they haven’t seen anything yet that is causing them a high level of angst… so the path forward is higher… only further extending valuations – which will cause a bigger shakeout when it happens… As of 7:00 – the FTSE +0.10%, CAC 40 +0.12%, DAX +0.26%  EUROSTOXX is +0.21%,  SPAIN +0.14% and ITALY +0.41%.

Eco data today includes the release the FOMC mins… do not expect to hear anything new… rates to remain low for months out and expect to hear plenty of support for that position from members of the FED.  Nothing new here… so move on…

US futures are UP!  Dow +57 pts, S&P’s up 6 (expect to hear more about making another new high), the Nasdaq up 32 pts and the Russell +6 pts. TGT and LOW’s helping the tone for the broader market and like yesterday – both these names are up in the Pre-mkt but may also come under some pressure as the day dawns… Now – remember – both of these name were under pressure yesterday with the rest of the sector… either way – stay close.

Gold is down – piercing $2000/oz as investors await news from the FED… the dollar index – which has plunged recently helping to support commodity prices has steadied and if the market considers that the dollar is about to rebound – then expect oil, precious metals and other commodities to stall out a bit until we get clarity.

This morning the S&P is at 3389 and set to open higher if futures hold now… 3400 is within site and while it could get there today – I don’t think it will ‘surge’ up and thru… but hey… it might… Chatter about the Biden economic plan is starting to be the topic du jour and as the media picks it apart – investors will react… and while everyone expects higher taxes (as Joe already promised that) – the question is exactly what does that mean? Who will get hit, what will happen to corporate taxes, death & estate taxes, middle income taxes, billionaire taxes, state taxes, and transaction taxes (known as fee’s in an attempt to disguise them.)

Remember – put in sell orders just above the market and buy orders below to catch any ‘reactionary’ moves while you are away. Again, support can be found in the 3330 range and if that fails then its 3275… but I am not saying we are going there right now… just laying out the landscape. Resistance is now up for grabs… as it appears that 3386 is all but a memory… 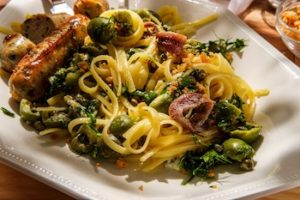 So yesterday I had the Perciatelli recipe and then I got this great pasta recipe from one of my good friends… and MT reader…You have to like Fennel – it is a very specific flavor -but if done right – is delicious.

For this you need: S&P, 1 lb of Buccatini, olive oil, sweet Italian sausage out of the casing, 1 sliced yellow onion, 1 fennel bulb, cored and diced… plus the fronds for decoration. 3 cloves of garlic – sliced, 1 c of cubed sourdough bread, fresh grated parmesan cheese and 1 lemon zested and juiced.

Bring a pot salted water to a rolling boil – add the pasta.

In a large sauté pan add some olive oil and brown the sweet sausage – remove and set aside.

Now add the sliced onion and fennel – season with s&p and sauté for about 15 mins. Now add in the sliced garlic – reduce heat to simmer and cover.

In another pan – add some butter (the recipe calls for oil but I like butter for this). Now add in the sourdough cubes and ‘toast’ until nice and nutty brown. Remove and place on a paper towel.

Now – strain the pasta – when done reserving a mugful of the water. Combine the pasta, sausage and onions and fennel together. Toss – add the lemon juice and a handful of parmigiana cheese. Toss again. If you need to moisten it up – now is the time to add some of the pasta water. Do not overdo it.

Now serve in warmed bowls. Crumble the sourdough cubes and place the crumbs on top. Add in some of the fronds to garnish. Mmmmmmm…