When Zero is Not Enough – Try the Risotto Amarone

So I guess the idea that the FED announced that they are keeping rates at zero for 3 years is still not enough to keep the bears at bay… They want more or they are gonna show him! I guess it was the fact that the FED on Wednesday said that the economic outlook remains ‘highly uncertain’ and with no NEW FED sponsored stimulus plans (not that we don’t have enough already) investors are re-thinking this whole ‘Risk On’ move. The algo’s and the traders are looking for more from the gov’t – they want to know what the gov’t is going to do for them now – otherwise it feels like they are gonna go into sell mode to try and force the issue – just weeks ahead of the election… as elected officials and trained economists/analysts raise concern that the economy could face risks in the months ahead as we re-open the global economy. It is now acting like a spoiled child… it needs more and more to keep it happy… otherwise it appears that it will come crashing down…

Yesterday’s eco data was mixed at best… while jobless claims and continuing claims came in better than expected – Housing Starts and Building Permits missed the mark by wide margins… and with an already negative tone to the day – this data only added fuel to the fire… and while everything that the FED and the gov’t has done will help stocks gain value in the long term – it is the short term that is the problem right now… and the short term is being controlled by the geo-political issues of the day more than the economic fundamentals of the day… the virus, a vaccine, the election, economic policy and the re-opening of the US and global economies… are all playing their part in the latest chapter. Now remember – these issues will cause markets to react and prices will reflect that – but in the end these issues will not price stocks in the long term.

The day began weak – Global markets had been weak overnight – the tone felt tired, exhausted almost… the algo’s were fired up – because they did not hear anything new from the FED and so the message was – ‘take some profits or at least take some money off the table’ – and so they did… Sellers came barreling thru the system – the buyers seeing this – did what they should – they backed off too -knowing that the sellers were anxious – so why chase anything?  No need – prices were coming their way…

In yesterday’s note… “I said that the market bounced off the recent selloff too fast and that 3400/3425 should be a top for now… On Wednesday we tested 3428 before failing and closing at 3385….and with futures lower – we can expect to see the S&P potentially challenge trendline support again which is 3330…”

I will say I wasn’t sure it would happen yesterday – I thought it would happen today – but I was wrong – it did happen yesterday – and it happened early on in the day… before the markets tried to rally, only to fail again test trendline support for a second time in the day only to bounce and close slightly off the lows – but not in positive territory. By the end of the day – the Dow gave up 130 pts or 0.47%, the S&P lost 28 pts or 0.8%, the Nasdaq got clobbered and lost 140 pts or 1.27% and the Russell gave back 9 pts or 0.63%.

And this does make sense, right? Investors/traders and algo’s are concerned – and when there is this perceived lack of clarity about what’s next – the natural move is for traders and algo’s to go into ‘panic’ mode – (because in this new tech world we live in – there are only two modes – Euphoria or Panic)… Now for me – I would say that it is very clear from the FED’s perspective – but it does feel unclear from the geo-political perspective and that is why we are seeing the latest reaction… they want clarity and at the moment it ain’t happening! I have been saying it all along –  the biggest risk to the market right now is political – and with the election less than 45 days away, its gonna heat up… and with that expect more volatility in prices and in sectors – but this does not mean to jump ship. In fact, it may mean just the opposite…

The sexy, high growth names will be the first ones to take the hit – and we are seeing that in the way the Nasdaq and the tech names are trading… why sell energy or financials for instance –  when they haven’t really done much vs. selling tech stocks that are up 30, 40, 80, 120%?  Recall that the Nasdaq not only shot higher off the bottom in March – but it rallied +34% on the year……and so it is a natural ATM.   Doesn’t that make infinitely more sense?  I mean – yes, you can sell everything and yesterday they did – but they were much more aggressive selling the tech space. And I’m still laughing at the people that didn’t unload their overpriced, wildly expensive SNOW positions…….I mean really?  $230/share for something that those Harvard trained investment bankers told you is only worth $120?  And yes –  while the space is ‘hot’ and the market is growing – it feels to me that its just a bit ahead of itself.  But I guess we’ll see……

And the vaccine that Trump told us was going to be available next month – not so much….the market had no response…which speaks volumes about what investors think.

And we await the TikTok decision…..anything short of complete US ownership falls short of the Trump mandate so how will this play out?  Will Oracle succeed in convincing him that partial ownership is ok?  If the Chinese division of TikTok retains any control – then what have done?  Nothing other than cause chaos and disruption – I say – throw them out and I say this country needs a ‘data privacy law’ that protects us from ourselves – because right now it doesn’t exist…

There isn’t one comprehensive federal law that governs data privacy… there are a confusing complex mishmash of laws that try to address data created in telecommunications, healthcare, banking and financials – but there is NOT one comprehensive law that protects our privacy in everyday life… and whether you believe it or not – it’s a problem… a problem that has yet to show its ugly face… again – watch the Social Dilemma on Netflix… it’s a documentary not a movie… and it only scrapes the surface about what is really going on…

Ok – US futures are flat this morning as investors consider the latest move… Tech has caused a fair amount of short-term damage and yesterday broke thru short-term support at 10,991 ending the day at 10,910. The late spring/summer excess may still have some room to go… if it can’t regain and move back up and through what is now trendline resistance – we may find it test 10,500 the level it churned at during the July time period. And if it does – it is no reason to worry… it’s ok to ‘shake the branches’ a bit to see who falls out… for the longer term investor though it will prove to be a bonus… to pick up some good quality names that go on sale.

Congress is still struggling to come to a deal to provide more aid to the country. Trump apparently pushing for the GOP leadership to reconsider their stance. And the vaccine – while it may be coming – let’s be honest – it isn’t coming anytime soon – but that does not mean we aren’t make headway in therapeutics… but that will also continue to be an issue for the markets in the weeks ahead.

There isn’t any eco data today to be concerned about – so the talk will be all around politics, stimulus, and the state of technology… is this sell off in the tech space saying more about the broader direction of the markets in the near term or is it just saying that the tech space needs to re-price based on its recent surge?

This morning the S&P is at 3357 after testing 3328 yesterday… It doesn’t feel like its gonna rally hard today at all, but nor does it feel like it’s going to sell off with any conviction either. I think today is a churn day… unless we get hit with news that is unexpected. It is Friday – Asian markets ended the week up, European markets are slightly lower… I suspect that yesterday’s low of 3328 is a floor for now… while 3400 appears to be resistance…

Remember what I said – the swift selloff that we saw, and then the swift recovery as if nothing had happened can be met with another swift selloff again… so sit tight… and hope that a test of trendline support (3330) holds… if not then a test of 3250-ish… would be in order… 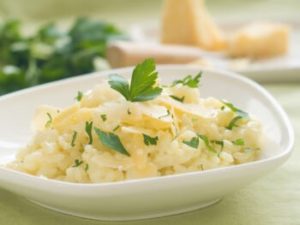 This is one of my favorites and comes to me from the Puglia region of Italy. This is the region that represents the heel of the boot – halfway up the calf. It is on the Eastern coast of Italy on the Adriatic Sea. Lucera – is an ancient city – one that is full of wonder and historical significance.

For this you will need: Vialone Nano Rice – similar to Carnaroli but produces a more creamy, delicious risotto, Fresh Monte Veronese cheese – this cheese is made from cow’s milk and is produced in Northern part of Verona. It is thought to be one of the great cheeses of the Lessini mountains.

Begin by heating up the Amarone. – do not boil – just slowly heat it.

Bring the beef stock to a boil and then turn to simmer.

In a separate saucepan, heat the butter, bone marrow and a bit of olive oil, sauté the onion.When the onion gets golden brown, add rice, stir and toast over the heat for several minutes. Season with s&p. Slowly add the Amarone – stirring all the time as you add allowing it to absorb in the rice.

To complete – add the hot beef stock one ladle at a time. As it is absorbed add another ladle always stirring with a wooden spoon. Taste and adjust seasoning. Cook until the rice has absorbed all of the broth and the grain retains it texture – do not cook so much that you make it mushy. Turn off the heat; add a dollop of butter and the grated Monte Veronese cheese.
Serve immediately in warmed bowls. It doesn’t get any better than this!