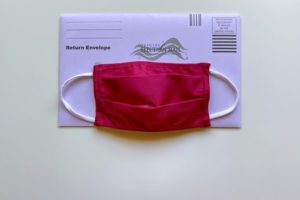 Dow, S&P, Nasdaq, and Russell get smushed… Stocks close broadly lower – but did get a boost in the last hour…

And as expected – it was ugly for most of the day… with stocks plunging right out of the gate… the Dow down nearly 1000 pts, the S&P lost 90 pts (just 10 pts shy of my 100 pt prediction), the Nasdaq dropped 273 pts and the Russell gave up 66 pts… the S&P and Nasdaq hitting those lows by 10:30 with the Dow and the Russell hitting those lows by 11:30 and 2:45 pm, respectively… but while that was the worst of it – that is not where stocks ended the day at all… all the talk of alleged money laundering, bank kyc (know your customer) failure, country closures, virus outbreaks, Supreme Court nominations, CEO resignations, fraud allegations, lack of any new fiscal stimulus and the Democrats threatening to put ‘everything on the table’ in January –  IF they take control of the whole executive branch… all adding to the early morning angst… and while the indexes remained negative all day – there was a late day surge as sellers appeared to be tiring and buyers appeared to be going on a small shopping spree. By the end of the day – the Dow lost 509 pts or 1.8%, the S&P gave up 38 pts or 1.1%, the Nasdaq rallied back hard – only losing 15 pts or 0.13% while the Russell got slammed – falling 54 pts or 3.3%!

Now what does that mean exactly? Besides the fact that our forefathers never imagined the histrionics that we are witnessing now…

It just means that while it was not pretty the drama has to play out before investors/traders/algos can focus on the fundamentals vs. the geo-politics… and to think of it – we are just talking about what happens here in the US – notice there was no talk of BREXIT or the Mid-East or even the trade tensions between the US & China.

Every sector was under pressure until the late day surge in the tech names… and again that makes sense since that sector has been the one to bear the brunt of the recent angst… Tech (XLK) is off 14% in the last 2 weeks – and the Nasdaq index is down 13% – far outpacing the Dow at -7% and the S&P at -9% – so in a late day scan of opportunities – it makes sense that tech would find some buying interest especially if the selling felt exhausted. Energy, retail and travel, Basic Materials and Industrials all among the sectors biggest losers and don’t expect the volatility to slow… the VIX (fear index) surged by 7.5% and is expected to remain elevated thru December – which only means that this index is telling you to expect a fight on November 4th… It is suggesting that we may not know who the next president is on election day… and that will surely keep markets on the edge as both sides fight for the win… leaving investors to deal with it. Either way – it is what it is…

In any event – you can argue where the market will go from both sides… the Bulls suggesting that a vaccine is on the horizon (bullish), continued support from every central bank in the world (bullish), boatloads of cash supposedly sitting on the sidelines just waiting to jump in – while the Bears will tell us that although a vaccine may be closer – the recent resurgence in infections around the world should be a concern and with winter coming – the northern hemisphere has to deal with a ‘twindemic’ both the flu and the virus, the latest headlines concerning the misdeeds carried on by the big banks, no further increase in fiscal stimulus prior to the election, and now the latest fight for the supreme court and what that means for life and policy in America for generations… and yes – while that may be perceived as a negative – those issues will not price stocks in the long term… in fact none of those arguments will price stocks in the long term – although they all create noise in the short term… what will price stocks is the economic environment, tax policy, opportunity zones, job creation and advances in tech that will continue to change the world…

Today there is a lot going on… Fed Chair Powell and Treasury Secretary Stevey Mnuchin will be on capitol hill today telling congress that the economy needs more help – Period. MSFT announces the latest in gaming and Xbox, Lonny Musk is hosting ‘battery day’ (along with his annual shareholder meeting) – THE new annual event (I guess) that is expected to reveal the newest and latest in battery cell technology… OK – that’s great – but the way the media is positioning it – you’d think everyone is sitting on the edge of their seats – holding their breath in anticipation of some blockbuster announcement… The key announcement? Will Lonny reveal a ‘million-mile battery’? I guess that is the speculation… so anything short of that is sure to be a disappointment… expect investors will hit TSLA hard if that is the case… it is quoted down 2.7% in the pre-mkt if that is any indication… and then there will be more ongoing conversations surrounding the death of RBG and what the implications and complexion of the court could look like if the Senate moves on appointing a new justice. And look – the election has already begun… ballots are being cast, votes are being counted… and you can be sure that someone who has voted already is going to hire some lawyer to get their ballot back now that the story has significantly changed… Can you just see how this plays out?

Eco data today is about Housing and the Richmond Fed survey… Existing Home Sales of +2.6%, Richmond Fed Survey exp of 12. – And while both of these would be solid numbers – I don’t expect them to drive the action at all.

Overnight… Asian markets ended the day lower – surging virus concerns at the top of the list… new closures being considered – hitting travel and leisure stocks hard… Japan closed for a holiday leaving Hong Kong -1%, China -0.98% and ASX off by 0.6%.

US futures are RED & GREEN! Yahoo! (feels like Christmas…) Dow futures down 30, S&P’s up 5, Nasdaq up 70 and the Russell is up 4. Again, after the beating they took yesterday – this is no surprise, in fact what is the surprise is that they are not higher… but we outlined the risks still, nothing has changed, so the concerns remain… The growing risk of a second shutdown in Europe is causing some in the media to question if that happens here and that is enough to keep it all in check… Any thoughts that we are getting any new fiscal stimulus becoming more of a distant memory… while the fight over a new supreme court justice is raising the temperature on both sides. The quarter is coming to an end – so expect so last minute re-shuffling in the next week and then its October and the start of earnings all over again… as we inch closer and closer to election day… Expect – volatility to remain elevated as investors remain concerned… but at some point – the focus will turn to 2021 and this will all be behind us…

Oil is up 63 cts at $39.94/barrel after having tested support and resistance yesterday at $38.66/$41.30.  Talk of lockdowns forcing the test of support while talk of decreasing supplies caused that test of resistance… Either way – we remain within the trading band… and the next move will be driven by how countries react to a possible resurgence and closure. Stay tuned… the longer term trendline is down so the any chance that we bust up and through will have to be accompanied by positive news on the virus/vaccine.

Yesterday, I said that the S&P would most likely fall 100 pts to 3219 – in fact – we fell 90 pts and ended at 3229… before rallying back to close down 38 pts at 3281… We are solidly inside the two trendlines… 3185/3344… and while we may try to rally today – my sense is that we will test lower in the days ahead as the rhetoric heats up, all the geo-political issues take center stage and the election moves closer and closer… the options market tells us not to expect an election result until late November/early December… and whichever side loses – we can be sure to expect a legal challenge with both sides arguing about mail in ballots… so buckle up… 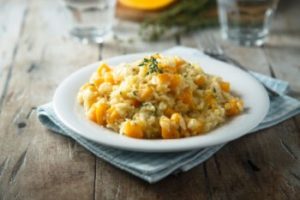 It’s getting to be that time of year again…

For this you will need:

Heat oil and a dollop of butter in a large pot over medium-low heat. Add shallot and cook, until shallot is softened, about 7 minutes – (remember to stir). Add rice and cook, stirring constantly, until rice is translucent, about 8 minutes.

Now add wine and cook until wine is mostly absorbed, then add 1 ladle of broth and stir, until liquid is mostly absorbed, when almost completely absorbed – repeat the process again… now add pumpkin and stir to combine. Add remaining broth one ladle at a time until fully absorbed before you add more… (capisce?) do this until rice is tender yet still slightly firm to the bite…in fact you may not use all the broth. Depends on how much rice you used…

When complete – fold in about ¼ c of heavy cream… (You can always taste and add more if you like) another tblsp of butter, season with pepper to taste (do not add salt – the cheese should be salty enough). Divide risotto among warmed bowls sprinkle with parsley and serve. Now to make a real impact – shave some cheese over the top then sprinkle with the parsley… Serve immediately