And it has been a roller coaster over the past 84 hrs… Early Friday morning we learned that both the President and Mrs. Trump were diagnosed with Covid19… futures markets went into a tailspin… as word leaked out… and left so many questions on the table… When did this happen? How long have then not been feeling well? Who else in the White House is infected? What happens now? We even had talk of the line of succession in case the need to invoke the 25th amendment presented itself… (which felt a bit pre-mature for sure… but I guess it had to be put on the table…) and all this happened before the opening bell rang on Friday morning…

And this rightly so – left the markets, investors, traders and the algo’s skittish… as the headlines spread around the world. The WH – telling us that his symptoms were mild, but that he was being watched – (Well I should hope so – he is the President…) As the bell rang on Friday morning – the first reaction was still to hit the sell button… the S&P opened down 42 pts – traded down another 13 breaching short term support at 3361 – only to find buyers at the 3325 level as Nancy Pelosi took to MSNBC early Friday morning telling us that this has now changed the stimulus conversation (never mind that the airlines had begun slashing and burning jobs and that local small business around the country continued to shut their doors…) and that she was prepared to work with Treasury Secretary Stevey Mnuchin to come up with a deal… recall that Trump urged Stevey to get it done and indicated that there was room to wiggle – the GOP at $1.5 tril, the DEMS at $2.4 tril – leaving something in the middle as a real possibility… surely a deal in the $1.7 – $1.9 tril level was within sight… and so that did help stabilize the markets but did not cause them to go positive.

Stocks rebounded as investors took it all in… remaining skittish as the headlines continued to hit the tape… Trump remained in the WH all day – with hourly updates as to the next course of action… rumor that he was being given that cocktail of Regeneron drugs proved to be true which caused everyone to speculate just how bad it was – What does that mean? What does that cocktail of drugs do? And then word that he was being give the Gilead drug – Remdesivir only caused more angst and questions (because it is not fully approved yet and is given for ‘compassionate use only’ – key word ‘compassionate’) Why was he being given both? Would one cancel out the other or worse yet – cause unknown side effects? What was going on that we weren’t being told?

And then the media began ripping it all apart…

Was the President being reckless? Was he sick on Tuesday night at the debate? Was he sick when he went to the fundraiser in Bedminster, NJ on Wednesday? Why did he go? Was he being arrogant? As you can imagine – there are arguments on both sides – so what’s the point? The left will argue their point, while the right will argue the other side… in the end – what consumed the dialogue all day – was, as you can imagine – What’s next? Who’s next? (by now – you know there is a list of people close to Trump that have tested positive.) Where was Mikey Pence? Was he ok? Would this change the election? (An election by all accounts that has already begun…) By the end of the day – the Dow lost 134 pts, the S&P gave back 32 pts, the Nasdaq gave up 251 pts and the Russell gained 8 pts.

And then after the bell rang – we learned that Donny was taken to Walter Reed Medical Center – in fact he was filmed walking out of the WH – after tweeting that he was going to the hospital – giving markets and Americans another reason to ask – What was going on? Look – he is the President, right? He was diagnosed with Covid, right? He is 74, male and a bit overweight, right? He had a fever and experienced a drop in oxygen levels (nothing below 93 as reported), right? What would you expect the doctors to do? I mean – Come on!!!!

Like him or not – It was all appropriate – he should have gone to the hospital – that is what you do when you are sick AND when you are the President of the free world. He was NOT wheeled out on a stretcher, he was not taken away in an ambulance, he was not on his death bed – It was all very controlled – but that did not stop the speculation from building… and so it was… Over the weekend – competing stations – featuring their own set of expert Drs, all had their own interpretation of what was going on – with some saying that if he was given Dexamethasone then we should all be concerned – because they only give that when the patient is ‘really sick’. (think intubated) Others saying that in this case – he is the President so – giving him Dexamethasone would be an appropriate course of action as an additional resource to help him recover… And so on Sunday when it was revealed that they did give it to him – Chucky Todd (Meet the Press) couldn’t wait to ring the alarm bell… again a move that seemed a bit pre-mature – but that’s another story.

Speculation was running rampant – what would futures do at 6 pm on Sunday? Would they collapse, were we going to see a swift selloff? Well maybe… that was until they took Donny for a ride around the block just ahead of the 6 pm hour (sending Chris Cuomo and Don Lemmon over the edge) – showing the world and the country that he was alive and well and that he was not on a ventilator and that he was not on his death bed… So at 6 pm – when the Asian markets were getting ready for trading to begin and US futures markets opened – traders and investors took the market UP… and that makes sense.

This morning… we will get Markit US Services PMI – exp of 54.6 – which is a positive and the ISM Services PMI exp of 56.2 – which is even more positive… but do not expect the macro data to be the focus… as discussed last week – the next 5 weeks will be all about politics and the election (even as earnings begin in earnest next week)… and this most recent development has now shed a new light on what the outcome might be… the latest polls suggest that Joey has a 13% lead over Donny and now – the Senate is in question… so this means a couple of things – with that much of a lead – then the idea of a contested election begins to fade (that’s a positive from the markets perspective).

What happens to the Senate is next… while a Democratic sweep – would not be ideal – it would at least offer clarity for investors and the markets… remember – markets, investors, traders and algo’s can deal with good of bad developments – what causes the volatility and angst is the lack of clarity, the uncertainty. A Biden WH and a split congress would be the best possible outcome – Markets would be ok with that, a Democratic sweep – as discussed – will initially cause the markets to ‘correct’ but in the end will find stability at lower levels as investors price in what the future will look like.

US futures are up… Dow +200, S&P’s +22, The Nasdaq +100 and the Russell is +18. Expect Biotechs to do well today – especially GILD and Regeneron – and the Dexamethasone manufacturers… PFE, MRK, NOVATIS, SANOFI, BAXTER, etc.

Oil which got crushed last week – falling nearly 8 % as concerns over a global slowdown and the Trump diagnosis, took control of the conversation. Concerns over no more stimulus in the US and job cuts in the airlines, travel, cruise ships, all causing analysts to cut the outlook for oil… Oil is up nearly 2% today trading at $38.60 on the back of the idea that Trump is out of the woods… Production cuts in Norway also causing some action as oil worker’s strike and that is expected to reduce North Sea Brent production by 330k barrel/day or 8% of their daily output. On the contra side of this argument is Libya… they have seen a 3-fold increase in production – which is still only 270k barrel/day but could ease any deficit caused by the strike in Norway. In any event – there are buyers… but pushing up and thru technical resistance at $40 will most likely prove to be tough. Let’s see.

The S&P closed at 3348 – just below resistance at 3361… and this morning’s action appears as if we may test that at 9:30 – when the bell rings. The action will clearly be driven by the Trump headlines… with talk of a relief package – Sara Nelson – President of the Association of Flight Attendants making an impassioned plea for DC to stand up and DO SOMETHING now. The country is hurting and it’s about time that Nancy Pelosi and Stevey Mnuchin recognize that. My sense is that we will tease 3360-ish all day… and if they send Donny back to the WH – then expect another surge higher… 3400 remains near-term resistance… a level I don’t think we will get to today – but could if he comes out dancing… remember – with rates at zero – TINA (there is no alternative) in the long run… if we get substantial talk of a fiscal plan (in addition to Trumps discharge) then expect to see buyers come in- but let me be clear – I do not think that they will announce a plan today… just doesn’t feel like it… And so – I continue to believe that the markets will remain volatile… but I still believe that it can all turn on a dime… Stay tuned… and talk to your advisor if you get anxious… a well-defined plan will do you good. 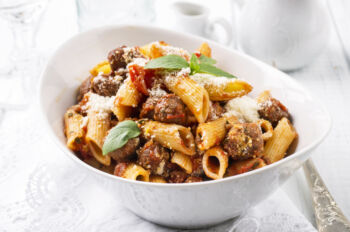 It’s October and there are pumpkins all over the place so try this dish…so good… This is a great dish and I will be making it again this weekend for a small dinner party as it is the perfect Fall dish and one that seems so appropriate at this time of year.

Brown the sausage in a large frying pan. Remove. Add the onion and garlic and a splash of olive oil. Add wine and bay leaf. Bring to a boil. Cook until liquid is reduced by half.

Stir in the pumpkin, half the sage and all the remaining seasonings. Cook a little longer about 2 minutes. Add the cream and sausage. Heat through. Remove the bay leaf.