Trump Backs Nancy into a Corner – What Now? – Try the Roasted Chicken

Stocks teased with the flat line most of the day yesterday before surging at about 2 p.m. after Fed Chair Jay Powell finished his Keynote address imploring congress to do more, saying:

“too little support would lead to a weak recovery, creating unnecessary hardship for households and businesses”.

The comments from the FED Chair fueled a late afternoon rally as investors remained convinced that one was in the offing… but then at 2:48 pm – Donny – announces via Twitter that he was cancelling any further talks between House Speaker Nancy Pelosi and his administration – suggesting that he too is tired of the antics – all the back and forth for weeks now… with the Dems holding out at $2.2 trillion while the Treasury Secretary Mnuchin offered up $1.6 trillion – Trumps biggest gripe is the money that she wants for the democratically controlled states that have so mishandled their finances – pork, as he calls it, that has nothing to do with Covid relief… But, it seems to me and so many others – that we aren’t really that far apart, I mean when you add that many zero’s – what difference does it make? It’s Monopoly money at this point… and Nancy nor any of the rest of them will be around anyway when the bill comes due… this is exactly why people are frustrated… and why we need to have term limits – But hey, THAT is another story…

Airlines have begun to slash jobs – Southwest to lay off 10% of its staff if they don’t get any relief soon, and cut routes as travel and business travel fails to recover, more small businesses close everyday – no matter if it’s a blue state or a red state, sending more people to the unemployment line and raising the prospect of even tougher times ahead. You know the drill…

Stocks did an immediate 180… going from plus 140 to minus 350 in the blink of an eye… Word even had it that he was planning (or considering) a televised address to the nation last night (did not happen) – just a day ahead of the VP debate and a way for him to demonstrate his fortitude after his 3-day ‘staycation’ at Walter Reed Medical Center. This is his way of controlling the narrative after discovering that Joey is now solidly beating him in both public opinion polls and fundraising. And this is an issue for him and the GOP – because if Joey beats him ‘decisively’ on November 3 then it will be very hard for him to claim fraud and the whole idea of a contested election and all of the volatility that would create goes away.

And in a breaking news moment – our friends at Goldman Sachs and their Chief Economist Janny Hatzius – put out a piece titled – “Biden Blue Wave Would Boost Economy” – Is this the final nail in the coffin? I mean, we all know the role that Goldy plays in US gov’t and politics… and while Hatzius acknowledges that a ‘sweep’ will produce higher corporate and personal taxes – he is of the mind that those concerns will be outweighed by the massive stimulus package he expects in the weeks post the inauguration. Does anyone else see a cabinet position for another Goldman alum?

When the tweet hit the tape – the media went into overdrive – What does it mean? Is he serious? Or is it another ‘negotiating tactic’? In any event – the algo’s didn’t delay… remember we spoke about how the ‘smart logic’ algo’s scrap the headlines, they scrape all of the social media sites – FB, TWTR, IG, etc. and every other news source out there. They interpret the words, unable to understand the tone – negative sounding words produce a wave of ‘sell orders’ and also produce a wave of cancellation of ‘buy orders’ leaving that void in the market that allows for the swift pullback… and so it is… As the 4 pm bell rang at the NYSE – we saw the Dow give up 375 pts or 1.3%, the S&P lost 47 pts or 1.4%, the Nasdaq lost 177 pts or 1.6% and the Russell lost 3 pts or 0.18%. Treasuries rallied, gold fell, and the dollar surged as downside risks rose…

In the end – the people I speak to (and some that I don’t) – never believed that a full deal was going to get done before the election – that the constant back and forth and the constant teasing was all just about politics… but now it looks like Nancy overplayed her hand… because what is she going to do now? Well – as you might expect – sometimes it isn’t what it appears to be… because after creating all of this noise and pushing Nancy into a corner – having to defend herself over her negotiation tactics – she hit back hard – blaming the meds for his erratic behavior and inability to deal with reality as she fires up her base… and tries to divert the conversation away from her…

So, at 10 pm last night – Trump (who should be in bed) begins tweeting again – apparently changing course – causing stimulus whiplash for investors… this time taunting the Dems to pass a piecemeal bill – $25 billion for the airlines and $135 billion for Paycheck Protection and individual stimulus checks of $1,200 that he is ready to sign IMMEDIATELY (caps are his not mine!) Finishing his tweet with “Are you listening Nancy?” And so – it becomes clear – it is a game of ‘Cat and Mouse’ or in Trumps words – it is the ‘Art of the Deal’ – let’s see how this plays out… Remember – the Democrats do not want to sign piecemeal measures going into the election – it will weaken their position – something that Donny is betting on…

Futures which had been under pressure going into the 10 pm hour suddenly did what? You got it! Can you say RALLY? As of 6 am – even before the sun rises over the Atlantic Dow futures are pointing UP by 200 pts, S&P’s are up 18 pts, the Nasdaq is ahead by 70 pts and the Russell is tacking on 18 pts. Treasuries are down, Gold is up, and the dollar fell before finding some support at the trendline…

In addition – there is another major story that is somewhat political – but not a surprise at all… A House led Democratic panel has now said that ‘Big Tech Wields Monopoly Power’ – Think the FAANG stocks – sans the NFLX – The report accuses FB, AMZN, AAPL and GOOG apparently of stifling competition… This is not new news – the investigation has been going on for 16 months… and if there is a Blue Wave that sweeps across the executive branch – then this will become more of an issue… because the Dems will control the whole place and you know how Lizzy Warren and Bernie Sanders feel about it… Republicans issued a separate report endorsing strong antitrust enforcement but not going so far as the Democrats – who are calling for a break up of big tech… Clearly – this will be a 2021 story…

There are no eco data points today – but at 2 p.m. today we will get the September FOMC mins and more FED speak. And tonight – watch for Mikey and Kamala to debate the issues (we hope) at Kingsbury Hall – a performing arts center on the campus of the University of Utah in Salt Lake City.

European markets are all lower at 6:30 after having been higher in early trade… confusion and so many questions remain… ECB (European Central Bank) President Christine Lagarde and her deputy Francois (Franky) Villeroy are due to speak at a conference in Paris later this morning. Expect to hear more about what she may or may not reveal about ECB forward policy. At 7 a.m. the FTSE -0.01%, CAC 40 -0.12%, DAX -0.27%, EUROSTOXX -0.13%, SPAIN -0.27%, and ITALY -0.17%.

The S&P closed at 3360 after testing as high as 3431- before Donny cancelled the negotiations… the S&P closed just below trendline support at 3367 but this morning that feels like it’s not a big deal… With futures UP – the next move is in Nancy’s court – how will she respond to the overnight challenge? Will she call her caucus in to deliver a piecemeal deal or will she stand her ground and tell him to ‘shove it’? Oh – boy – pull up a chair and grab some popcorn… it’s gonna be Twitterfest… If she comes to the table then look for the algo’s to take stocks up and thru 3400 again… if she pushes back then watch as volatility increases… A look at the VIX reveals that it is up 17% in 4 days… as it pushes up again trendline resistance at 29.91… any failure to deal will once again cause the VIX to spike higher… stay tuned – talk to your advisor or give me a call if you get anxious… a well-defined plan will do you good. 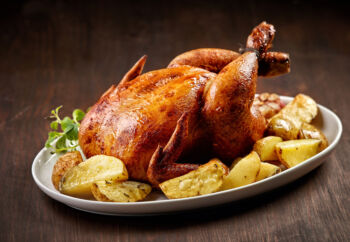 In light of the ECB presentation in Paris today – Let’s try the Roasted French Country Chicken.

Preheat oven to 425 degrees. Add enough olive oil to cover bottom of roasting pan – not a bath, just a glisten… let heat up.

Combine – the garlic, oregano, parsley and white wine (or broth) in a small bowl – set aside.

Season the chicken pieces with s&p… toss in a bit of olive oil (just enough to help you massage each piece). Now add to roasting pan – skin side down. Bake for 15 mins… then turn, bake for 15 more mins… juices should be running clear now… if not – then cook for another 5 mins or so… Now pour the garlic/wine mix over the chicken and cook for an add’l 5 – 8 mins. Remove and serve on a family style platter with a large mixed salad dressed in a simple oil/vinegar dressing.