While the election produced no clear winner yet – It did offer some clarity to investors… and that is why stocks are surging… the idea of the country being pulled left is mostly off the table – and so there is a bit of relief which is causing investors to go all in… Stocks surged on the ‘day after’ and are continuing to surge on the day after the day after… so that is one side of the story, the other side of the story is that the election produced no clear winner and while investors might be celebrating the candidates have a migraine… causing one of them to send out the league of lawyers across a range of states to challenge everything that wasn’t nailed down – leaving us with the sinking feeling that this isn’t going to be over anytime soon… Expect recounts, expect lawsuits and even expect Trump to demand ‘verification of every voter’ – I mean is that possible? Could we live through that? I mean what lawyer planted that seed in his head? And if they succeed in winning that battle – then we’ll be lucky if this is over before the spring!

That being said – Investors/traders/algo’s LOVED it… Stocks exploded higher in the pre-market and then followed through during the day… the Dow, the S&P, the Nasdaq and the Russell all gained significantly during the day… the Dow added more than 2.9% at its high with the Nasdaq up 4.9%, the S&P up 3% and the Russell up 1% before profit taking set in… as rumors of contestable results started to permeate the chatter and exhaustion set in – traders types began  to ring the bell and take some of the day’s profits off the table… By the end of the day all the indexes ended in the green with the Dow +367 pts or 1.4%, the S&P + 75 pts or 2.2%, the Nasdaq surged 430 pts or 3.8% and the Russell +0.78 or 0.05%.

Now look – what is clear is not who we elected – but what we rejected. We rejected the chaos inflicted upon the country from both the left and the right. We rejected the “progressive agenda’ being pushed Bernie, Lizzy and others…We rejected one party rule on Capitol Hill – as the GOP managed to maintain control of the Senate – sending a clear and very forceful message to both the GOP and the DNC. We rejected that Blue Wave that the Dems tried to force us to believe was brewing. We also rejected the Red Wave that the right projected was brewing. We rejected covid19 as the LEADING concern on voters’ minds. And we rejected the current President and Challenger by not overwhelmingly supporting either of them – the vote fell directly along party lines leaving both parties wounded as neither succeeded in the landslide that would have sent a different message to the country and the world.

So now – we wait for the winner to be identified… Joey came out at 4:15 pm yesterday afternoon and addressed the nation, saying that it is time to heal… and that while he was NOT declaring victory – he was sure when the votes are counted he will be the winner… Now that was a bit different than what Donny said at 2:30 am – when he essentially said that ‘we had won but then we didn’t… and that was enough to send Chrissy Cuomo and Donny Lemon over the edge on CNN… I mean you have to watch those two for nothing other than the histrionics… It’s comical… I just wish SNL would create a skit about them… (maybe I’ll send Lorne Michaels a Twitter message)

What we do know now is this election has ensured that the key elements of the current bull market will remain intact for at least the next two years – when we enter that ‘mid-term’ election cycle – which could either confirm what we voted on Tuesday or once again throw the country further to the left or right. But let’s not go there yet… Many of us want this current round of elections to be over. The idea of rising corporate taxes and rising personal taxes along with immediate rollbacks of a range of regulations is now muted. The idea of a ‘really big’ stimulus program is off the table as well, but the idea of a ‘big’ stimulus program is not and while some of the industrial names  that have surged in the weeks leading up to the election came under pressure yesterday –  CAT -7.4%,  MMM -3%, BA -1.4%, ASTE -11%, DE -2.8%, my sense is that that is just a short sighted short term reaction… Let’s not be that cynical – a stimulus plan IS coming… why it isn’t here yet though is completely political… but let’s not go there. On the other hand – we saw strong demand for Communication stocks (XLC + 4.3%), Tech (XLK + 3.9%) and Healthcare (XLV + 4.4%) – all sectors that were under a cloud of a left leaning administration but are now not so much…

Academics and economists reminding us that there are still 11 million people out of work and state and local gov’ts are in distress and thousands of business have gone or are about to go out of business so the economy will need billions of dollars a month to keep it afloat.

The other idea that is causing markets to surge is that the FED is also expected to continue to feed the beast reminding us that ‘fighting the FED’ is never a good idea.

This morning – US futures are UP! Dow futures are +400 pts, the S&P’s are up 68 pts, the Nasdaq is ahead by 340 pts and the Russell is adding 19 pts. This latest move – driven by the idea that maybe we will get a result today and that the election is over (for all intents and purposes) and that the focus will return to the company fundamentals and the broader macro data fundamentals. Is it also driven by the idea that Senate Majority Leader Mitchy McConnell (who made what seem like ‘conciliatory comments’) and (almost) President Elect Joey Biden are friends and ‘work buddies’ that have proven that they can work together for the good of the economy and the nation. We can only hope. What is interesting is that we have not heard from Nancy (Pelosi) or Chucky (Schumer) – What does that mean? (If anything).

European stocks are UP as well… the BoE (Bank of England) held rates steady at their meeting but did vote to EXPAND its asset purchase program to 895 billion pounds or $1.1 trillion dollars – capisce? Is that a view of things to come with the ECB (European Central Bank), The RBA (Reserve Bank of Australia), the BoJ (Bank of Japan), the PBoC (Peoples Bank of China) and the FED?  And a Biden presidency is expected to repair our image and our relationships around the world – and while it is still unclear if a Biden win is the final answer – European investors are betting it is.  At 7 am – the FTSE + 0.46%, CAC 40 + 1.21%, DAX + 1.68%, EUROSTOXX +1.56%, SPAIN +1.65% and ITALY + 1.81%.

Oil which has been all over the place in the past week – has rallied back off the lows of $34.59 on the 2nd to $38.76 this morning a 16% advance in just 3 days… Now today – oil is under a bit of pressure – why?  Because the oil traders are suggesting that a Biden win and a GOP Senate will not produce that massive stimulus plan and so oil will suffer… OMG… stop already… From a technical perspective… Oil rallied right back to the trendline at $39.77 and found resistance… and that makes sense after the 16% move up… but once again… the world needs energy to spin. OPEC, Russia and the US do not want to see oil plunge – and will do what they need to support it… All 3 trendlines are converging right here – so resistance will be tough – expect to see a fight at the $40 range.

The S&P closed at 3443 yesterday after trading as high as 3486. Futures are suggesting that we bust up and thru 3500 as the bell rings… leaving not only the October high of 3537 in sight but also the yearly high of 3588 in sight which would be a 10% move off the October 30th low. That is a swift move and one that will certainly come under pressure as buying exhaustion wanes… and the excitement begins to fade… because in the end – It is still not perfect, and it will still have challenges ahead. So don’t get caught up in the surge… stick to the plan. 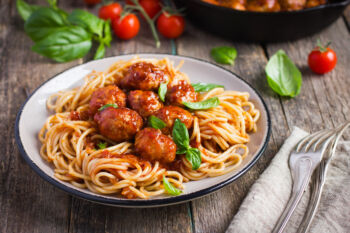 Now add 4 cans of kitchen ready crushed tomatoes… if you cannot find then buy the plum tomatoes and run them thru the food processor – add 1 1/2 cans of water – stir – bring heat up to high until it boils then reduce to simmer… season with s&p, add the fresh chopped basil – like 6 / 8 leaves. Add back the meat – chicken, pork and meatballs. Add in the oil and bits from the fried meatballs. Let simmer for at least 45 mins – stirring occasionally… at this point it is all done. (But if you turn it off and let cool and refrigerate until the next day – it is always better.)

Now bring a pot of salted water to a rolling boil – add spaghetti and cook for 8/10 mins until aldente. Strain the pasta – reserving a mugful of pasta water. Return pasta to the pot – add back 1/4 cup of water to re moisten… now add 4 ladles of sauce and mix well.

Serve immediately in warmed bowls with plenty of fresh grated Parmigiana cheese. Serve all of the meat on a separate platter in the center of the table.

Now that we got that right – (you can also add some ground pork or veal if you like) I always use 1 lb of ground chuck and 1 lb of ground pork… 2 eggs, s&p, handful or two of grated Parmigiana, (if you only have Romano then that’s fine), 2 med cloves of crushed and minced garlic*,  2 slices of Italian bread soaked in whole milk and a splash of olive oil…