The Hypocrisy is Numbering – Try the Bay Scallops

Dow adds 249 pts and goes above 30,000 again… the S&P adds 32 pts and kisses 3,700 while the Nasdaq added 878 pts to close at 12,464 and the Russell advanced by 44 pts and closed at the day’s high at 1,892.45. Stimulus talks cited as the reason for the push… Expiring unemployment benefits on the day after Christmas, surging virus cases, overloaded hospitals, locked down cities and now whole states (CA is locking down for 3 weeks – no in-person dining across a range of counties, no gatherings, etc… but there is pushback… different counties refusing to abide by the latest forced closure ), slowing job creation suggesting that the economic recovery is losing steam… all causing congress to ‘suddenly’ become more concerned… and I say suddenly – because what have they been doing for the past 2 months?

All of the headlines I noted above are not NEW news – the experts predicted this, yet Congress led by Nancy Pelosi chose to make a bet… she and her coalition chose to NOT negotiate on the $1.8 tril package that the GOP offered back in October, instead countering with a $2.4 tril package that had a lot of ‘pork’ in it… and today – we learn that she is scrambling to sign a $908 bil package as the clock ticks on her vacation. You see, she (and the rest of them) is due to go on vacation this Friday… and won’t be back in DC until after the new year… so, the heat is on… and now she finds herself backed into a corner, inflicting pain on her constituents in CA and the country… so, expect to see her celebrate and pat herself on the back if this deal gets done this week – saying –

“Look what we did! We negotiated hard on your behalf and signed a deal that is 50% of what we could have signed one month ago – Isn’t that great?”

The hypocrisy is numbing… and the fact that all of these elected officials (from both sides) dragged their feet causing even more damage as the country pled for help should not be rewarded at all. Yet – the market is celebrating that a deal is in the works… even as the economy begins to struggle again and the virus surges… but the surging virus is apparently not the concern at all, because if it was, then the market would be trading lower vs. making new highs… what the market (and investors) are focused on is the coming vaccine… and this as the headlines try to prepare us for a devastating Covid Winter. Dr. Deborah Birx (you remember her, right) taking to the airwaves yesterday on NBC’s Meet the Press to remind us that:

She went onto say – the virus is ‘most likely to be the most trying event in US history’… think about that… ‘the most trying event in US history’… and we’ve got a lot of history… Now what the media is quick to point out is that the latest surge is because people travelled for Thanksgiving and had dinner with their family, they also point out that people are having dinner indoors at restaurants across the country… what they completely ignore are the waves of celebrations that took place in the streets across the country – with hundreds of thousands of people – after Joey won the election… People shoulder to shoulder, screaming and yelling, laughing and crying, hugging and kissing… but none of that means anything to the experts – the surge in cases is a direct result only of Americans travelling for Thanksgiving and dining indoors and for this – elected officials are shutting down whole parts of the country.

In any event – investors are looking thru the ‘covid winter’ –  they are looking thru the devastation of small businesses and focusing on what they believe will be a very bright spring/summer/fall 2021… Analysts all over the street all singing the same song – while right now appears to be slowing and inflicting pain – the latest survey from the NABE (National Assoc for Business Economics) found that 73% of those surveyed say that the economy will return to pre-pandemic levels by the summer of 2021… and it is all predicated on the 3 or 4 expected vaccines that are coming. (never mind the improving therapeutics that are now available.)

Eco data on Friday showed that we only created 245k jobs…well below the estimate of 460k and a 60% drop from last month… (but bad news is good news), Avg hourly earnings rose by 0.3% above the estimate while the underemployment rate held steady at 12%. The Underemployment Rate is a measure of people that reflects not having enough paid work or not doing work that makes full use of their skillset. This vs. the unemployment rate which came in at 6.7% which defines a person that is out of work and looking and is unable to find a job. Factory orders, Durable goods orders and Cap Goods orders all coming in line with the expectations… so that is also bullish… and does help to feed the beast.

This morning we are seeing global markets backing off a bit and digesting the moves once again….but remember – it is December and last week we made the point that so many professional asset managers missed the boat, expected that a move lower had to happen, expected to put money to work when it did…well, the move lower only happened in small doses, as the buyers remained just below the surface – supporting the markets -which should have been the first clue, the second clue was the Biden win when the market did not back off and the third clue was the talk of the $4.5 trillion sitting in money market accounts earning nothing – leaving some of the talking heads to suggest that it ‘has to come into the market’ – which I disagree with, (it doesn’t have to do anything)  but whatever… the fact that the media makes it a topic to discuss only fuels the move higher as they make it seem that there will never be another down day on the street – which is exactly why I say – Buyer Beware…

Yes, it may not feel like that right now, but my guess is that the re-pricing will come in the new year… Once the slate gets wiped clean again… Now the event that could ignite a move lower is the Georgia Senate Race… and you can’t discount this as a non-event… because it is not… and the jury is split – but is favoring a GOP win… and that would be the best outcome and one that I think will see the market back off a bit… as the anxiety subsides… and you say – why would it back off? Because the 11% surge in the S&P since the election is a bit long in the tooth and it is also pricing in that GOP win… and so I expect a ‘buy the rumor/sell the news’ event. Now if the DEMS win or it is split with 1 DEM and 1 GOP then I think the market backs off even more as investors then have re-price what that means for regulation, technology, taxes, never mind what it will do to the far-left wing of the party. Look – Joey is silently rooting for a GOP win… Why? Because then he can tell the socialist left wing to sit down and shut up. They won’t be able to pull the party to the far left and we will end up with a moderate/center gov’t – which is the best solution for the country which is then why the market will stabilize.

European markets are trading lower… the vaccines are set to begin tomorrow in the UK… truckloads of the vaccine arriving from Brussels in preparation of distribution. In addition, Germany is set to release Industrial Production figures and the UK and the EU continue to focus on a last ditch effort to come to a BREXIT deal as Britain’s Chief Negotiator makes his way TO Brussels in a bid to salvage the discussion. (There is a lot going on in Brussels…) At 7:15 am – FTSE +0.76%, CAC 40 -0.65%, DAX -0.18%, EUROSTOXX -0.34%, SPAIN  -0.37% and ITALY -0.19%.

Oil is under a bit of pressure this morning as the news of new lockdowns makes its way thru the markets… Now look – oil has surged some 35% since November 1… all a result of the vaccine talk and what it means for the global economy… the news that the US is getting slammed again and that CA is shutting down is not helping to confirm that story. Additionally – South Korea raised their ‘alertness’ level as cases begin to surge there as well. Expect the latest restrictive measures and lockdowns to keep a lid on prices in the near term… but I expect that this will be short lived and continue to believe that we remain in the $41.50 (trendline support) and $50 range.

This morning futures are looking a bit lower – with the Dow down 105 pts, the S&P off by 12 pts, the Nasdaq lower by 8 pts and the Russell down 4 pts.

The S&P closed at 3699 on Friday… talk of a $908 bill deal is what the market is anticipating – thus the economy should get a shot in the arm before the end of the year. While this is good news – the market moved higher on Friday on this news… so today expect the deal to be dissected and discussed ad nauseum… Either way – renewed lockdown restrictions are likely to weigh on the economy in the months ahead as Dr Birx told us… and while the spring summer promises to be exciting – the next couple of months could prove to be volatile causing prices to swing – offering new opportunities to put money to work. Remember we are now in unchartered territory… we are smack in the middle of a very broad  trendline channel… 3400/3900… and we are only weeks away from year end… My sense is that we have seen the years high… but remember – 3700 is just another big round number that tends to get everyone excited… the algo’s could attempt to push us up and through, but the smart money will most likely unload some of the highflyers as they expect a re-pricing in the early part of the new year. As the long-term investor – stay focused and stay the course, keep balanced. 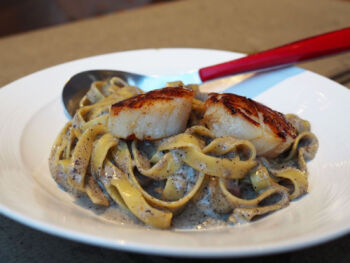 Feast of the 7 Fishes No.4 – Bay Scallops in Black Truffle Cream Sauce

Ok – you can make this dish in 15 mins… Put a pot of salted water to boil.

In a large sauté pan – begin with a 1/2 stick of butter and a splash of olive oil – turn up the heat to med. Now add in the sliced shallots and chopped garlic…sauté in the pan for 5 – 8 mins… now – turn up the heat and add in the rinsed and patted dry bay scallops – you want to sear them quickly.

If you are serving over pasta – Add the pasta to the boiling water – stir.

Next – once the scallops are seared – turn the heat down to med and deglaze the pan with some white wine – allow it to steam off a bit – now add the heavy cream, the brussel sprout leaves and shaved black truffle. Stir well. Now add in the white truffle oil – this is key – you DO NOT need much – it is very potent… add – mix, taste. If you need a bit more than do so… but go easy – do not overpower.