DASH & AI Soar – Which Begs the Question – Are we at the top? Try the Baked/Broiled Salmon – Recipe No. 6

Doordash and C3.ai come to the NYSE… in another IPO bonanza! Both companies being introduced as the newest members of the NYSE family… and neither disappointed… Both exploded higher while the Nasdaq got crushed and the broader market came under pressure… which is such an interesting contrast… while all of the excitement surrounding these names stole the show – investors were once again considering what to do as the markets made new highs on Tuesday and the virus continues to spin out of control and elected officials in DC continue the histrionics… While stocks initially traded up – by the end of the day – there was red all across the board – except for those two newest members of the family whose action was like the North Star… shining brightly in the dark… At 4 pm – the Dow had lost 105 pts or 0.35%, the S&P gave back 30 pts or 0.8%, the Nasdaq got crushed (which is the real story) and lost 244 pts or 1.9% while the Russell gave back 16 pts or 0.82%.

Now just a quick recap of DASH and AI – in was what a show of support – investors couldn’t apparently get enough of either… after Goldman and UBS suggested that DASH was fairly priced at $102/sh – already up from an earlier estimate of $80/sh and Morgan Stanley and JPMorgan told investors that AI was fairly valued at $42/sh up from the original $38/sh  – Investors/traders and algo’s told all of those investment bankers that they were wrong… that they mispriced both of these IPO’s… and as the opening bell rang on the NYSE yesterday – the market makers at the post attempted to assess all of the demand and supply… orders being delivered to the system electronically from brokerage firms around the country as well as floor brokers representing both broker/dealers as well as the direct customer (think hedge funds, mutual funds, pensions plans, etc.) coming together to determine a fair price… and it didn’t just happen… oh no, it is a process for sure – one that is always fascinating to watch – (and was much better when it was all human based – sans the computers – but that’s another story…).

You’d think – the computers would make it easy, right? You’d think that the computers would just take all of the interest and go BANG – here’s the price… but you would be wrong… while the computers attempt to do that – what you realize very quickly is that the investment bankers – in this case Goldman Sachs and Morgan Stanley– try very hard to control the whole situation… demanding that nothing happen until they give the ok… Now on a certain level, that is fair – but at some point, it gets old… What they try to do in this case is control ALL of or most of the action in the stock for opening day… They hold the opening and canvas the institutional base – attempting to gather all of the IPO interest to control price and action. Warning those same clients that if they go away from them, they risk getting their orders not represented and/or unfilled – which is a complete and total farse… (absolutely FAKE news… not a shred of validity to it – ZERO…)  But that’s another story… And while every other stock on the NYSE opened at 9:30 – AI opened at 11:54 am at $100/sh or +138% while DASH opened at 12:42 pm at $182/sh or a 78% premium to what those investment bankers suggested was a fair price. Amazing… and while the excitement is evident in the action – it also speaks volumes about investor psyche…..and sentiment….In this case – excitement which I believe was waaaaayyyyyy overdone… now in the end I could be wrong, but my gut tells me that there is a bit of ‘froth’ in what happened yesterday… and today – we will see what happens when another IPO takes the stage over at Nasdaq – Air BnB (ABNB) is set to launch… and this morning we find out that both Goldman and Morgan Stanley are the leads in this listing as well…

This morning we find out that they priced this issue at $68/sh up from the original $56/$60 share pricing giving this company a $47 billion valuation… (DASH now has a $60 bil valuation and AI has an $8 bil valuation) – So what’s the guess? If this opens up anything like what we saw yesterday – expect to see opening prints anywhere between $120 and $160 share… even as their own IPO materials acknowledge some risks…

“In light of the evolving nature of Covid -19 and the uncertainty it has produced around the world, we do not believe it is possible to predict Covid-19’s cumulative and ultimate impact on our future business, results of operations and financial condition”

– but still, they try to mute this concern by also saying that:

“We believe that as the world recovers from this pandemic, AirBnB will be a vital source of economic empowerment for millions of people.”

And while both statements are true – let’s see which ones investors will pay attention to… my gut tells me that this IPO too will be a star performer today… just because of the excitement that has been building around this name for months and because of the excitement in the IPO space this year as money looks for new opportunity… but again – Buyer beware… Brian Chesky founder and CEO of ABNB to appear on CNBC this morning… surely he is one happy 39 yr old… and it is sure to be a very happy holiday season for him and til ‘death do us part’… Bravo!

US futures are churning after what was a bit of consolidation yesterday… Dow futures are +55, the S&P’s are +5 pts and the Russell is up 6 pts while the Nasdaq is off by 7 pts… Again – it is the Nasdaq story that is not getting enough attention here… And while yesterday’s Nasdaq move was nothing more than a pimple on your (fill in the blank) – it is interesting to note that while those two IPO’s caused all kinds of excitement in the TECH space – investors are taking the opportunity to take some money off the table in some of this year’s tech ‘hi flyers’… and that MAKES perfect sense… the Nasdaq was up 36% ytd as of yesterday morning… this on top of the 34% in 2019 – which as you might remember was off the lows created during the December temper tantrum in 2018 when we saw the Nasdaq plunge 23% between Mid- Sept and end of year leaving it down 4% in 2018.

European markets are up small and doing the churn as well… as investors around the world consider the potential of a post-BREXIT agreement and what the agreement will look like. Both sides – the EU and the UK vowing to make a formal decision by Sunday… the stumbling blocks?  Fishing rights and competition rules… and if no agreement gets done – taxes and fees are expected to soar – further hampering a smooth transition. In addition – the ECB (European Central Bank) is due to publish their latest thoughts on monetary policy decisions and macroeconomic projections… the expectation is for them to expand their massive stimulus program as the continent gets hammered with a second/third wave of the pandemic. This even as the launch of the virus has begun… because that too, will not just ‘fix everything’ – it too is a process. At 6:45 am – FTSE +0.54%, CAC 40 +0.28%, DAX +0.08%, EUROSTOXX +0.19%, SPAIN +0.07% and ITALY +0.26%.

Oil is up 66 cts at $46.17 – the logic today…?  The benefits that the vaccine will bring and the demand that is expected to come once the world is in recovery mode… (have you heard this before?) Like I said yesterday and have been saying for months now – Don’t overthink it – the recovery is happening (although it doesn’t feel like it right now) and with that will be the re-opening trade that includes energy and oil. We are well within the $40/$50 range as it builds a base right here in the mid 40’s.

Gold comes under a bit of pressure as stimulus talks stall… which is also a joke – because legislators have abdicated their responsibilities on behalf of those suffering – but there is an 11th hour deal that will hit the tape… as both sides will then pat themselves on the back and take responsibility for ‘getting it done’ – I say – stop paying the legislators until they fix it – put the pressure on them to actually do something… it is shameful… In any event – gold remain in the $1825/$1885 range.

Bitcoin is down again today… off by another $300 trading at $18,212/coin… now off 11% since two weeks ago when the media paraded the Winkelvie twins across the screen to tell you that Bitcoin was going to $500,000/coin (at some point in the future…) or as Novogrataz tells us – it will be $150k by this time next year… Let the games begin…

The S&P closed at 3672 retreating after breaking that psychological 3700 big round number… In any event – it feels like its churning… I said I thought 3700 would be the high for the year and now the markets will churn into year-end… With the exception of 2 or 3 of the latest IPO’s causing a bit of excitement – many investors are rebalancing and re-pricing for what they suspect could be a bit of volatility ahead. Again, today we might get some more news about the stimulus – but my guess is that they will wait at least one more day (if not two) to make ‘maximum’ impact… it will be interesting to see how this plays out… Will the Dems back off on liability shields and will the GOP embrace more stimulus for individuals? I still believe that the market is consolidating… and continue to believe that we are at the highs. Either way – it is what it is…

Remember we are now in unchartered territory… we are smack in the middle of a very broad trendline channel… 3400/3900… and we are only weeks away from year end – While the algo’s could attempt to push us a bit higher – I believe that the smart money will most likely unload some of the highflyers as they expect a re-pricing in the early part of the new year.  As the long-term investor – stay focused and stay the course, keep balanced. 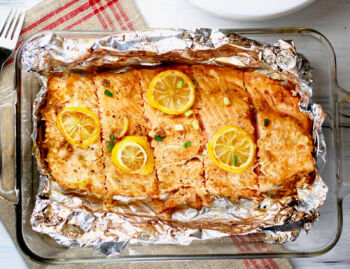 This one is the easiest of them all. You need only a couple of things – Salmon, Old Bay Seasoning, fresh lemon juice and olive oil.

Get you salmon – skin on – rinse under cold water… pat dry. Place nicely in a baking dish – season with Old Bay and a squirt of fresh lemon juice and olive oil and bake on 375 for 15 mins… Now Turn from bake to broil and broil the tops for a couple of more mins… Careful not to burn. Remove and serve. Simple! No fuss, no mess. And when you are making 7 different dishes and need to put them all out at once – this is one of the simpler ones to get done – and it’s always good.