The Fights have Begun – The Vaccine launches, and The Electoral College Votes – Try the Fettuccini

Good morning… It was the week of IPO abbondanzas!  (An abbondanza is an Italian word that means abundance – but it’s a celebration of that abundance, it is joyful and demonstrative!) and what an abbondanza it was… You remember right? Doordash C3.ai and AirBnB… were the stars of the week… leaving some still in awe of their market performance… in fact – in another show of ‘not knowing what they are doing – some ‘traders or bozo’s’ (must have been the Robin Hood types) – were ‘furiously buying’ call options in ABB on Thursday – ABB is a big SWISS industrial company not AirBnB – (ABNB) the disruptive US travel/leisure/lodging/tech IPO that came to market on Thursday… Which makes me laugh – because apparently all of those ‘sophisticated traders’ can’t read either… because when you type in ABB on your Bloomberg machine you’ll notice a couple of things… 1. It trades at $26.75 (a far cry from the $140 ABNB price).  2. You’ll see that ABB is an ADR (American Depository Receipt) meaning that it is a foreign company – based in Zurich, Switzerland and last time I checked – Zurich is not the same as San Francisco. 3. The CEO is a guy named Bjoern Rosengren and not Brian Chesky… and if you even looked at CNBC – all you saw was Brian Chesky’s face all over the screen. And this is all so reminiscent of the same thing that these ‘trader bozo’s’ did when Zoom Communications (ZM) came to market… they thought they had a ‘secret’ and went out and bought calls on Zoom Technologies (ZNTO) hoping to cash in on the Zoom Communications trade… Which just leads me to ask – Did they think these two stocks were fungible? (mutually interchangeable).

“IPO FRENZY – Not long ago, the markets for initial public offerings was dormant.  Now it’s booming, fueled by easy money, a surging stock market, and fear of missing out.”

And again, I will ask – Does it feel a bit 1999-ish… (just a bit?) Now understand that there are some differences – the stocks today actually have business plans vs. just a ‘dot com’ in their name, the Fed was ‘tightening policy’ vs. today they are ‘loosening policy’ with interest rates at zero and the addition of $120 billion of stimulus on a monthly basis. But then – What does that say about investment bankers demand and valuation models? How could they all have missed it? Are they not aware of the accommodation by the FED?  Whatever, it was what it was and if you were lucky enough to get in on the craze – you were very happy. But – the action in those 3 names did not mimic the rest of the market.  Stocks were under a bit of pressure even as these 3 names were going bonkers… By the end of the week the Dow had lost 0.6%, the S&P was off by 1%, the Nasdaq gave back 0/7% and the Russell bucked the trend and added 1.2%.

In the end – it was the lack of a defined stimulus program, it was more of the political drama, it was the launch of the PFE vaccine in the UK – and it was rising concerns over surging cases of covid-19 AROUND the world – and the lockdowns to come… German Chancellor Angela Merkel announcing that Germany is going into ‘hard lockdown’ through year end as infections swell. France remains in lockdown, Greece is in lockdown until at least January 7th and citizens there must text a gov’t number to get ‘permission’ to leave the house and give the reason why they need to leave. Italy is now awash in Red, Orange and Yellow zones while Spain remains in a ‘state of emergency’. In the UK – London is burning even as the vaccine rolls out… So, I guess the Americans are not the only ones suffering a second and third wave of infections…

Here at home – cases continue to rise in sections of the country. NY’s Cuomo and CA’s Newsome announcing the halt to life as we know it – closing nearly every small business in those states – while leaving the big box stores, Costco, WMT, TGT, Grocery and Drug Stores etc… open suggesting that the virus only attacks people in small family-owned businesses. And now with the December holiday season in full swing – the temperature is rising across the country as well.

Over the weekend – we did not get any new news on any additional stimulus out of DC… as the fight rages on… but again this morning US futures are UP on hopes of something. At 5:15 am – futures are surging… the Dow up 225 pts, the S&P’s up 22, the Nasdaq ahead by 45 and the Russell is advancing by 23 pts. Now part of this is that ‘backing and filling’ I have been talking about… last week saw the S&P pierce 3700 and trade up to 3712 in what was the final surge in the Santa Claus rally – it ended the week at 3663… down 1.3% off that high. This morning’s surge will attempt to take on 3700 again… once again backing and filling the chart.

Look – the eco data is softening, a range of states are becoming more restrictive, businesses are getting shut down… Initial jobless claims are rising and now with states beginning to shut down again, we can only expect that those numbers will surge again. DC has to do something and while everyone expects an 11th deal – I thought the 11th hour was gonna be Sunday evening – ahead of the market open on Monday… and don’t discount that just yet… as the rumors of a deal continue to swirl – it will have so much more impact if the headlines hit the tape BEFORE the market opens…

In addition – the US is now ready to begin the vaccination process today… with UPS and FDX responsible for shipping the vaccines around the country. FDX from the center West while UPS takes from the center and goes East. In a recent statement FDX revealed that “We have worked closely with our healthcare customers on a highly orchestrated and precise distribution plan, but are not releasing details”.

December 13th – will now be known as a new kind of ‘D-Day’ – in the military – D-Day is the day the mission begins… and it began yesterday – many will mark today as the official beginning (and they would be wrong) as the first round of healthcare professionals get vaccinated. The launch was yesterday… Capisce? There are many key elements that will make this a success or failure – logistics, temperature, side effects and vaccine reluctance are just some of them… But, it’s time to go… Will you get yours?

Friday brings that massive entry into the S&P for TSLA… expect to hear more about this this week… as there is $5.4 trillion in index funds that track the S&P and there is another $6.7 trillion in actively managed funds that use the S&P as their benchmark… so when this gets added to the S&P – all of these funds will have to buy this stock while selling others in order to remain in balance. It is sure to be a bit chaotic but this is not new news and many of these funds have already begun the process… and many will continue post Friday…

Eco data this week includes a bevy of macro data: Today – nothing. Tuesday brings us the Empire State Manufacturing Survey – exp of +6.9, Import and Export Prices of +0.3% +0.2% respectively. Ind Production of +0.3%, Cap Utilization of 73% (relatively benign) a number approaching 78 – 80 would be more of a concern. Retail sales are due on Wednesday – exp of -0.3%, Ex autos and gas of +0.2%. Markit Manufacturing PMI of 55.8 (bullish), Markit Services PMI of 56 (bullish) Wednesday brings us the FOMC rate decision – NO change expected. Later in the week – Building permits of +0.9%, Philly Fed survey of 20, Housing starts of 1.5 mil.

European markets are up as well… BREXIT talks – are advancing, but there is still not an 11th hour deal… and UK PM BoJo is warning the UK and the EU of a ‘no deal’ exit on December 31st. And in Germany – non- essential businesses and schools will close beginning on Wednesday through year end the virus rages on.

Oil is up 50 cts at $47.05/barrel. Hope rising as the US kicks off their virus inoculation program. WTI remains in the $45-$50 trading range. Remember – you can make a $55 argument for oil in the weeks ahead. And while the next couple of months are expected to be dark – the sun appears to be shining in March… so sit tight.

The S&P closed at 3663 down 4 pts on Friday as the churn continues… I said I thought 3700 would be the high for the year and that the markets will churn into year end and I continue to believe that. With the exception of those 3 IPO’s – many investors are rebalancing and re-pricing for what they suspect could be a bit of volatility ahead. The Georgia senate race is the next election drama point – and what happens there will set the tone for the next two years. A Democratic sweep will cause the left wing of the party to put the pressure on Joey, a GOP win will take the pressure off of Joey – I suspect Joey wants to see a GOP win… this way he doesn’t have to deal with the left wing’s hysteria and he has demonstrated that he can reach across the aisle and get it done.

Again – today we might get some more news about the stimulus – I still believe that the market is consolidating… and continue to believe that we are at the highs. Either way – it is what it is… Stay the course and talk to your advisor. 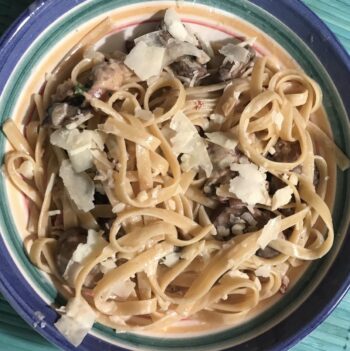 Bring a pot of salted water to a boil to get it ready.

Next – chop the prosciutto (not dice) and then sauté in a large frying pan – do not burn, just sauté… after 5 mins… remove and set aside. Now add in the sliced garlic and sliced mushrooms and sauté for 15 mins. Now add back the prosciutto and let it blend together. Turn heat to low – and add in the heavy cream and incorporate nicely.