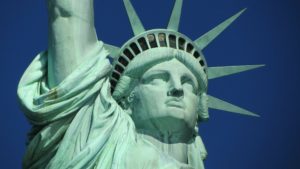 It is a new day in America… congress has fulfilled its constitutional duty and while the ‘beacon of hope and light’ was dimmed for a few hours yesterday in what seemed like a scene out of a movie – it burns bright today and America stands tall… It is with a heavy heart that we recognize that 4 people died yesterday in that chaos and our prayers go out to their families – in the end – someone needs to be held responsible… for those lost lives.

After what happened in DC yesterday afternoon – it seems almost odd to be writing about how investors reacted to the Democratic sweep and how they responded to the storm that erupted at the ‘People’s House’ on Capitol Hill… there were so many adjectives used to describe what the world witnessed yesterday… No need to repeat them… and there will be plenty of analysis and commentary concerning why it happened, how it happened and what we as a nation are going to do about it – I,  like so many Americans have a range of emotions surrounding what happened yesterday and how January 6th will be remembered and recounted in the history books… World leaders, business leaders and elected officials all expressing shock and widespread condemnation leaving Trump abandoned and alone…

Investors now pricing in a Georgia sweep and a completely controlled Democratic congress and what that really means for the stock market going forward… and then at about 2 pm – when the chaos started – stocks did back off a bit, but not by any significant amount… and while the worst of what happened yesterday took place after the closing bell – investors this morning are not dismayed (disgusted yes, dismayed no) and why?

Because – Political events – while they create chaos – do not in the long-term create prices… fundamentals do, earnings and revenues do, US and global economic activity does, monetary policy (think FED) always helps and investor long term outlook plays a role in pricing stocks. And the word is that investors (currently) are not that concerned… they have had time to consider what a Biden administration will try to achieve, they understand that there will be a change in tax policy, regulations, (although this is not yet completely defined) and leadership – Chucky Schumer now Senate Majority Leader.

Have you been paying attention to the Russell? Have you seen how this sector has responded and what that may imply? The Russell (value) is up 35% since the end of October – just ahead of the election… in what is a clear sign of investor excitement. Value is outperforming Growth at the moment – with the SPYV +20% since the election while the SPYG is up 13%. 10 Year treasuries piercing 1% for the first time since March – suggesting that investors are making bigger bets on that ‘massive fiscal stimulus’ package along with a massive infrastructure package that we have been talking about. Remember – congress has already authorized an additional $900 billion and the markets are now expecting somewhere around another $2 trillion to be authorized – many now assuming sometime in the first quarter. Our friends at Goldy – suggesting in a report put out last night that Americans can expect even bigger stimulus checks before March.

Energy stocks – and by this, I mean both solar energy stocks and classic (think fossil) energy stocks – surged. TAN (Solar ETF) added 8.7% leaving this stock at $115/sh.  FYI – this ETF is up 440% since the March lows and is up 54% since the election… as investors recognize that there will be a renewed push and focus on alternative energy sources. Now that doesn’t mean that oil stocks and the more ‘classic’ energy ETF – XLU – have not benefitted – they have as well.  The XLE + 3% is up 80% from the March lows and is up 41% since the November election.  XOM +37%, CVX +30%, SLB +65% and HAL +70% since the election. (Demand for oil is NOT going away anytime soon)

And as noted – the Tech sector came under pressure… partly because it has so outperformed for two years straight +33% in 2019 and +44% in 2020 – it makes sense (and we discussed this) that money rotates out as investors just take ‘some’ off the table to re-invest in what are expected to be ‘hot’ sectors going forward.  And this should not be a real concern for anyone – the fundamentals have not changed – and while some tech may find themselves under regulatory scrutiny – the TECH sector is a big sector and it is more than just the FAANG names….so get on board… think Cybersecurity names – HACK (ETF) which includes: CSCO, FEYE, PANW, CYBR to name a few.  Artificial Intelligence names – IRBO (ETF) is up 108% since the March lows and is up 22% since the election and the IoT (internet of things)?  Those are hot as well… SNSR (ETF) and STM, SWKS, ST, ADT are all names in the space.

US futures are higher again today and Asian and European stocks are also up and while the   virus is still alive and well, the chaos in DC has completely pushed THAT issue to the back burner… Yes, vaccinations are proceeding, maybe not as fast as some would like, but it is complicated… so sit back… wear your mask and be careful until you get yours. Dow futures are + 72 pts, the S&P’s + 13 pts, the Nasdaq +75 pts and the Russell is + 8 pts.

OIL holding its own at $50.05/barrel. A Biden administration is expected to clamp down on US production which will hamper supply handing control of oil prices over to the Saudi’s and OPEC.  As demand for oil comes back – expect a push in prices. $53 appears to be the next resistance point – (February high).

Bitcoin – well… that’s up another $3000 at $37,520. No need to discuss this – because if you talk to Mikey Novogratz and he appeared on CNBC again this morning at 6:45 he continues to ‘gush’ over this new asset class re-iterating his 2021 year-end prediction of $500,000/coin. While warning that the chart is hyperbolic so ‘be careful’.

The S&P closed at 3748 and if futures hold in – we will see investors test yesterday’s high of 3,783 as investors continue to digest what’s next. The trendline channel is wide – 3525/4050 so there is room for stocks to go in either direction and remain within a ‘normal trading range’ You know how I feel – invested yet cautious with new money… I still think we could see a 5% – 7% move to the downside after this euphoria wears off… I am not taking money off the table because I am long term bullish. And I will continue to pick away at opportunities and new ideas as they present themselves… It’s all about discipline.

Now this is great on a cold winter night… easy enough to make – better if it sits overnight – but fine if it does not….and it’s a good ‘comfort meal’.

Begin by slicing some garlic and sautéing in a pan until golden…now add the beans and ½ can of water… turn heat to simmer.

Next – toss in the pancetta, and sausage – turn heat to med high –stirring and breaking up the sausage meat – should be all done in about 10 mins or so.  Now add in the beans – water and all… Now add in enough vegetable broth to cover the sausage and then some – simmer for 20 mins… Taste and season with s&p.

Bring a pot of salted water to a rolling boil.  Add the pasta – only about ½ the box… because it grows… cook for 7 mins… strain – reserving 1 mugful of pasta water.

Add the pasta to the beans and sausage – add back ½ of a mug – let it simmer for another 2 or 3 mins… check for doneness.  If you need to – add back the other ½ mug of water.

Remember, the pasta will grow and suck up the liquid – you do not want this to become dry… so keep an eye.  Ladle the soup into bowls, add some of the chopped parsley and have fresh grated Parmegiana cheese on the table for your guests.