Nothing seems able to stop the push higher… not surging cases of the virus nor new strains of the virus, not new lockdowns around the world, not the 10 yr treasury piercing 1% for the first time in months, not some weakening US economic data, not even a failed coup attempt in the US nor any of the political turmoil (think a second impeachment or a call for his resignation or talk of invoking the 25th amendment) even gave investors a reason to pause at all… No, ma’am – investors looked past all of this (which might be a bid shortsighted) and focused on the future… a future defined now by 3 virus vaccines, (PFE/BioNTech, Moderna, & AstraZeneca), and a possible 4th in JNJ’s ‘one dose’ product, a stimulus program in the US that is set to challenge any stimulus program we have seen to date, and a surging (almost hyperbolic) Bitcoin +43% – going from $29,250 on the 1st to almost $42,000 on the 8th… which continues to cause a stir among the trader types and apparently institutions around the world as they all look to jump in! (Trader Alert:  Bitcoin is currently down $5k at $35,382 as of 4 a.m. but was down more than $8k overnight – trading as low as $32,390). Recall what we discussed on Friday – Buyer Beware!

Stocks ended the week higher (again), in fact ended the week at record levels after the Georgia Senate elections runoff on Tuesday now give the Democrats an edge – because while the Senate is evenly split between the GOP and the DEMS (50/50), the Dems have Kamala to cast any tie breaking vote (which gives them the majority as long as everyone votes the party line – more below) and that was part of what led to what is being called Wednesday’s failed ‘coup’ attempt  by far right Trump supporters. Investors appear to be focusing on a smooth transition to a Biden Presidency and the prospects of a multi-trillion dollar stimulus package after Wednesday’s weak ADP report followed by Friday’s weaker NFP (Non-Farm Payrolls) report and as the country continues to fight its way out of the destruction caused by the pandemic.

Fridays’ NFP report showed a loss of 140k jobs in December – a time that should have usually showed a gain (think temporary holiday workers) – thus ending 7 straight months of job growth. Yet, none of this seemed to dampen the excitement of what the future holds. By the closing bell on Friday – the Dow advanced by 57 pts, the S&P rose 21 pts, the Nasdaq gained 135 pts while the Russell failed to join the group… falling 5 pts to end the week. Now after the first full week of trading – we find the Dow up 1.6%, the S&P up 1.8%, the Nasdaq up 1% and the Russell up a whopping 5.9% (so the small pullback on Friday should not be a surprise to anyone at all) – but does it portend a coming broader weakness? Surely, you can’t be totally surprised if it does…

Now look – from a political perspective – investors are celebrating the idea that the Biden Administration will be very different than a Trump Administration – it should be much more consistent, non-confrontational, and non-isolationist – many expecting Joey to ‘play nice in the sandbox’, and while that is being perceived as a positive – the narrow majority in the Senate may in fact ‘limit’ what Biden could push through and that is also being seen as a positive, in terms of higher income taxes, higher corporate taxes and more regulation across the financial, tech and energy sectors – and that is good for risky assets… and look what has happened to the financials and the energy names… up 4.8% and 9.3% respectively since the start of the new year. In fact, investors are getting so excited that they have taken Consumer Discretionary is up 4.9%, Basic Materials are up 5.5%, Retailers are up 6% and even healthcare is up 3.9%. Conversely, Utilities are down 0.6%, Consumer Staples are down 0.8% and Real Estate is off 2.6% while Tech and Communications stocks are flat.

Now, the frenzy that we saw last week is coming under a slight bit of pressure this morning… Investors around the globe appear to be in a more cautious mood… as noted above – the hysteria surrounding Bitcoin appears to have calmed down over the weekend and the political situation in the US is now causing some investors to take a second look about what the short-term future holds. The push to get Trump out is gaining speed, but is not a guarantee, so expect this to be the topic of the next 9 days… As of January 20th – he will be nothing but a distant memory – but the markets may be showing a bit of concern over what he ‘could’ do over the next week… and Nancy is going to make sure that she continues to outline the risks he could put the country in as she demands Pence invoke the 25thAmmendement. As of 5 am – Dow futures are off 210 pts, the S&P off 25 pts, the Nasdaq off 59 pts and the Russell is off by 15 pts.

At some point – investors have to start to pay attention to valuations as the march higher since the election has offered little to no pullback as the excitement took over what some might define as ‘rational behavior’ at a time when the world is grappling with a worsening pandemic and an economy under assault. The indexes are looking overextended and so the risk of a pullback rise with each passing day. Other explanations for the weakness today include surging virus cases, another new strain found in Japan, and the political landscape. Tech companies (FB, TWTR, SHOP, GOOG, AMZN, AAPL) all pulling the plug on Trump is also causing a broader conversation about the role of tech, section 230 and ‘freedom of speech’. Stripe – a fintech payments platform also pulling the plug on Trump’s political donations site saying that he has ‘violated’ their terms of agreement.  And now Amazon Web Services, Google and Apple are all banning Parler – another social media site that is popular among conservatives and has been heavily used by Trump supporters saying that they do not want to support posts that ‘clearly encourage and incite violence’ leading to the next conversation about how much control big tech has over the 1st amendment and information flow – expect this to be a 2021 focus. It is a tangled web we weave and one that will only get more complicated in the weeks and months ahead.

This week starts the earnings season and the quarterly beauty pageant. We will hear from JPM, C, WFC on Friday to kick it off. Additionally, JPM is hosting their 39th annual healthcare conference and the CES is launching their Tech ‘extravaganza’. Expect dozens of companies to present market outlooks, earnings guidance, future thoughts and key technology and other business developments. Many investors will be paying close attention to what these companies reveal about themselves just ahead of the reporting season.

On the virus front – Japan now identifying another new strain of the virus to join those identified in the UK and South Africa. They noted that it is difficult to determine how infectious this strain is or how effective any of the current vaccines will be. So taken together – all of these issues are giving investors a reason to pause… As the week progresses – we will hear from the ECB’s Christine Legarde on Wednesday, Fed Chair Powell on Thursday, Bidens plans for his massive fiscal support, the weekly EIA (Energy Info Admin) crude oil inventory report and a slew of economic data all ahead of the earnings beauty pageant which begins on Friday. Expectations remain high for earnings in y/y comparisons… and the economic outlook for 2021 remain high as well. But the question remains – has much of that already been priced in?  We are about to find out…

European markets are under a bit of pressure at 6 am… with the FTSE -0.12%, CAC 40 – 0.4%, DAX – 0.40%, EUROSTOXX -0.33%, SPAIN -0.09% and ITALY -0.33%.  The surge in the virus cases being referred to as ‘alarming’ and the UK announces that both the Queen and Prince Phillip received their vaccinations over the weekend.  France announces that Moderna’s vaccine will begin arriving today. There are not economic reports to drive the action so expect more consolidation.

OIL is off by 40 cts/barrel – trading at $51.84.  The media trying to paint today’s move a virus related… blah, blah, blah… how about it’s the same thing… oil has rallied sharply on the ‘recovery trade’ and is now just digesting and consolidating… Look – oil priced in a lot of optimism and demand is alive and well. The 38% surge since the election needs to consolidate… so don’t fret… We are approaching the February highs and expect to find some resistance. We remain in the $45/$55 range.

The S&P closed at 3824 up 21 pts… As I have been saying – I am still waiting for this rally to fade and pullback – it’s called ‘mean reversion’ suggesting that what goes up must come down… and while the day-to-day movements can be chaotic and unpredictable the market does tend to adhere to this mantra… This could be that week of consolidation and pullback – that alone is not a reason to panic, in fact it would be a benefit. So stick to the plan… trim and rebalance where necessary and keep moving forward… 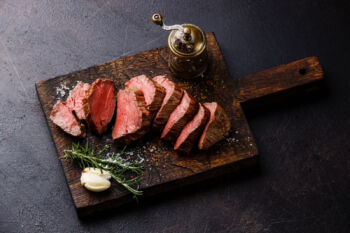 This is a great dish…. easy to make and so good.

Ok – begin by selecting a sauté pan that will accommodate the tenderloins without crowding… Now – heat the pan on med hi… add in a bit of olive oil and about 3 tblspns of butter… (the oil prevents the butter from burning). Drop in the crushed garlic and sauté.

While the butter is warming up – season with s&p and dredge in flour. When the butter is all melted – add the filets and brown the meat nicely on both sides. Once you are satisfied – remove the meat and place on a platter.

Add in about ¾ cup of red wine to the pan… let the alcohol burn off – always using a wooden spoon to scrape the bottom of the pan… when the wine is almost boiled off – add back the filets and cook for about 1 or 2 mins per side… Remove and immediately serve on a warmed plate with a green veggie… Maybe Sautéed broccolini in garlic and oil.

Serve with a large mixed salad. Dress with fresh lemon juice and olive oil dressing. Season the salad with s&p and dried oregano. Toss and serve.