It Was All a Game GME! – Try the Beef Ragu

Stocks ended the day mixed again – with the Dow lower by 37 pts or 0.12%, the Russell lower by 5 pts or 0.25% while the S&P rose 14 pts or 0.36% and the Nasdaq once again taking the lead – rising 92 pts or 0.69%!  And while the day was full of earnings reports, political headlines and more talk about the virus/vaccines – day traders on Reddit were ‘storming the hill’!

Reddit is a social news organization, web content rating and discussion site. Members need to be registered and then submit content to the site – either links to stories, or pictures or text messages that the other members ‘vote’ on – depending on how the vote goes – the story either moves up or down in importance until it hits (or not) the ‘front page’.  And apparently – when your post hits the front page – enough people regard it as important and they act like a herd of sheep – following each other in what was a complete frenzy yesterday… It will become a Harvard Business School study module into ‘behavioral finance and the herd mentality’.

It was all a game – Gamestop (GME) that is – as the rebellious Reddit traders continued their assault on the shorts and sent the stock soaring in the morning – and created a ‘storm the hill’ type of atmosphere – shouting & tweeting & challenging the day trader types to take on the shorts… (Wall st has had a fairly negative view of GME resulting in big short positions among some of the Wall St paparazzi). You could hear them singing – “Do You Hear the People Sing? Singing the songs of angry men…..” (one of the key songs from Le Miserables – think French Revolution).

I mean GME is a specialty electronic game and PC entertainment store – they sell new and used video game hardware and software along with accessories. … 4 yrs of declining sales and weakening fundamentals should tell you all you need to know…and the stock was valued appropriately – or was it?  Did the day traders on Reddit know more about valuations and pricing than the street?

The next part of the story is where it gets interesting… Day trader types started chatting about GME last week about how Wall St analysts were negative on the stock and how the stock was under siege by the shorts…..…and suddenly it became the focus of the non-Wall St day trader, the non-analysts, the non-strategist on the ‘social media’ platform.   And in what started to be a slow move to try and ‘squeeze the shorts’ last week,……  turned into a ‘feeding frenzy’ yesterday…..as those ‘trader’ types started spreading the word to ‘BUY GME’ and it ended up on the front page of Reddit.

Don’t buy it because the street has it all wrong, don’t buy it because the stock is undervalued, don’t buy it because there is a change in management or structure or that there is even a ‘rumor’ that it is being taken over by someone one…..Nope.  Just buy it to squeeze the shorts, buy it make a point that we know what we’re doing….Buy it to show the power of the net and the power of persuasion and to study behavioral finance….. Now look – it was for NO reason other than to squeeze the shorts to try and extract blood from the guys betting against it….  There is nothing that has fundamentally changed for the company, nothing, the negative story IS the story, yet the power of the internet caused so many to jump in….now don’t get me wrong – last week GME was trading at $18/sh by Friday it was trading at $70/sh and by 10:50 am yesterday it was trading at $159/sh (completely disconnected from reality) ….…if you bought GME at $20 last week and sold it yesterday at $150 – you made 130 points on your money – BRAVO! And if you were the guy that sold the stock short at $20 and were forced to buy it back at $150 – you lost 130 points on your money, Capisce?  ! I mean it’s a zero/sum game. Reddit traders tweeting out pictures of their trading account balances showing huge gains, patting themselves on the back only fueling the excitement while the media reported that more than $1.6 billion was lost by the guys who were short the stock.  Yesterday’s action only demonstrates the power of the internet and the power of the herd mentality and the complete disconnect between reality and the imagination.  What will happen today and who is next?  It’s fascinating really……

Away from all of this excitement was the preparation for a boatload of earning reports this week.  AAPL clearly in focus (along with so many other tech names) as so many expect them to crush it….not only on the top and bottom lines, but on sales of new iPhone 12’s during the holiday season,  the cloud services, watches, iPads and all the accessories….and what we can all expect to see in 2021…..Earnings expectations of $1.37/sh are sure to be too low, services and revenues will surely grow faster than anyone expected –  in fact – revenue is expected to be $102 billion in the quarter….and that is only the ‘expectation’ ….. I can’t wait to see what Timmy reports….and nor could investors as they took the stock up another 2.7% to end the day at $142.92 bringing the 2021 performance to +14% in 4 weeks.

And now there is another ‘new thing’ that is building….It’s called the ‘Musk Effect’.  And it’s that simple – Lonnie sends a tweet and the day traders go wild…..ETSY is the latest example….Earlier this morning Musk tweeted out – “I kinda love Etsy”  and suddenly the stock surges up $20 or nearly 10%!  Is it the traditional asset manager running in to buy it at 7 am off of a Musk tweet or is the retail day trader?  Doesn’t matter!!!   – its up 10% in 30 mins….And this – the Reddit trade and now the Muck effect to me suggests the top is near!

Now all of the recent excitement that has helped to fuel the latest advance is alive but may again fail to push the market higher.  As I have been saying – it feels a bit tired and needs to digest and re-group….On the vaccine front – we are making progess, on the virus front – the scientists are telling us that the newer strains of the virus may carry more risk…..so keep wearing your masks.  Tomorrow brings us the FOMC minutes…(Federal Open Market Committee) and what will we learn?  Anything new?  Doubtful….rates to remain near zero and the thinking goes that the FED will do whatever it takes ….the only thing we should listen for is how the votes among the members go….is it unanimous or not?  Are some pushing back on holding rates at zero and if so, who? Who expects a surge in inflation, when and what would they do about it?   In any event – rates aren’t moving up right now…so power on!

On a side note – the House delivered the article of impeachment to the Senate last evening… and while it was introduced – it is being put on hold until next week to allow the Senate to confirm more of Joey’s cabinet members….and speaking of Joey – he took to the airwaves yesterday selling his ‘Buy America’ policy….in what sounded a lot like a prior administration’s policy – but we were told it wasn’t the same- that this was different. We can only hope.

European markets are higher this morning after ending yesterday lower.  As the churn continues and Europe deals with the surging virus cases along with new strains..  Italy’s PM Guiseppe Conte is expected to resign today after weeks of fighting with Matteo Renzi – head of a junior coalition party in the gov’t and that is causing some angst across the country.   Investors there awaiting the start of US earnings season….  As of 7 am the FTSE +0.86%, CAC 40 +1.42%, DAX +2.01%, EUROSTOXX +1.48%, SPAIN +1.26% and ITALY +1.24%.

OIL continues to churn—trading at $52.87  as traders bounce back and forth over what the lastest strains and lockdowns mean for demand.  Word has it that some of the US states that had gone into lockdown (CA) are now reopening – allowing life to return to normal or at least attempt to …We remain in the $52/$55 range for now…..as signs of weaker demand weigh on the market one day and then signs of stronger demand cause it to trade higher the next.  In any event – supplies here in the US will begin to tighten a bit as the Biden administration blocks production on federal lands…..so say good bye to $35 dollar oil….thinking that $50 is now the new floor. 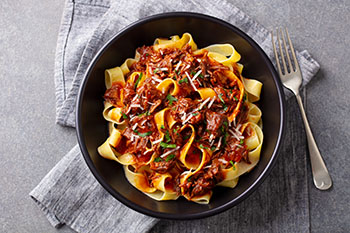 This is a great dish, simple to make, requires only one cut of beef and can be ready to eat in about 2 hrs.

In the microwave – heat up ½ c of the beef broth and add the dried porcini mushrooms for 1 min.  Remove and let stand for 5 mins.  Now remove the mushrooms, press between two spoons to squeeze out all of the water – over the cup with the broth.  Save broth.

Chop the mushrooms.  Set aside.

Now in an over proof pot – heat the olive oil on medium heat and add the diced onions.  Saute for 5 mins or so.  Add the garlic, saute for a couple of mins.  Add the tomato paste, season with s&p and stir until the mixture turns darker – maybe 3 – 4 mins.  Add the wine, raise the heat to med high – when it boils, reduce to simmer and  – continue to cook until the wine is reduced and the pot is almost dry….4 mins max.  Add the tomatoes, 1 cup of beef broth and the mushroom broth and the mushrooms – allow to simmer.

Now season the beef with s&p – add to the pot, cover and transfer to the oven.  Cook for 1 hr.

Now – uncover and cook for another hour until the meat is tender.

Remove from the oven and remove the beef from the pot.  Let it rest for 5 mins…  Now the fun part – using two forks – shred the beef – (discard any tough connective tissue). Return the shredded beef to the pot.  Taste and adjust with s&p.

Now you can put this over rigatoni (something robust) or you can make a nice creamy parmegiana polenta and serve it over that.  Either way – you can’t go wrong.