Will the Bottom Fall Out? – Try the French Onion Tart

Stocks continued to gyrate as the markets continue to digest the most recent moves up and the fact that most of what we know has already been priced into the markets – so as discussed, do not be surprised to see the markets thrash around as it tries to price in current risk… and until it does, expect more volatility… with a test lower as it shakes the trees a bit and consolidates ahead of the next phase. And that phase includes an end to the virus crisis as we vaccinate more people, an end to lockdowns, and the return to ‘normal’.

Markets ended higher yesterday, trying to take back the losses it suffered on Wednesday… Eco data coming in mixed but essentially in line with expectations… and earnings continue to ‘beat the estimates’ which should surprise no one. The gyrations in the indexes are a clear reaction to a number of issues… issues that are not new and have been mostly priced into the markets… In addition, small ‘technical breaks’ in trendline supports seen on Wednesday only add to the angst. By the end of the day – the Dow gained back 300 pts or 1%, the S&P’s added 36 pts or 1%, the Nasdaq +66 pts or 0.50% and the Russell lost 2 pts or 0.1%.

Now, many colorful words can describe the events that we have all witnessed this week, events that will undoubtedly be seared into the annals of the US capital markets history books… The extraordinary developments surrounding the concept of ‘short selling’ and how anyone could get short more stock than exists is a question that will fall directly on regulators laps… How then a group of 1 million + ‘amateur’ traders (and even that is a question as to just how amateur they are) gathering in a chat room in plain sight could so disrupt the US financial markets by forcing an incredible ‘short squeeze’ will certainly be another conversation. And then how online brokerages, that offer ‘FREE’ trading can suddenly halt trading in selected securities will be yet another… which brings up a whole host of questions surrounding just how ‘FREE’ trading is… Think payment for order flow, think rebates and think fractured market centers.

In the end – what it will reveal is that the market structure is broken and the technology that has contributed to the ‘gamification’ has now revealed just how broken it is. Fractured trading venues, sub-decimal trading, super computers operating with artificial intelligence continually scanning the venues looking for opportunities to ‘game’ the market, complex derivative transactions, extreme amounts of leverage, access to the markets by anyone with a cell phone, online brokerages that ‘gamify’ investing, wholesalers paying for the order flow (which allows you to trade for free but be careful what you wished for), and regulation that has failed miserably has sent shockwaves across the system and will become a study case in graduate school for years to come. Given the gravity of the situation Washington is now front and center of the storm and that is sure to create even more drama… So sit tight – this story has just begun…

Many asking if the drama will change the face of investing? Should long term investors be concerned about the bottom falling out? To that I will say – absolutely not. What we are witnessing is not long-term investing, it is pure speculation and gambling… whipping around shares of GME, or AMC or BBY etc… for milli-seconds just to try and reap short term rewards in a chaotic environment says nothing about the long-term investing case. Because for the most part – those names are not in a long-term portfolio – unless of course you are indexed and don’t know what’s in your portfolio. If not – you might want to ask.  Just a thought… In any event – even if they are – I imagine that they would not be a significant enough to derail your goals… but again – do your homework.

US futures are down this morning… as the churn continues. The Dow was set to give it all back earlier but has managed to recoup some overnight losses. At 7 am the Dow is down 120 pts, the S&P’s off by 20 pts, the Nasdaq lower by 120 pts and the Russell is up 6 pts. And this as the earnings story continues to be strong and the eco data in line. Earnings from V, WDC, SKWS and MDLZ came in after the bell and they all beat… sending those stocks higher in the afterhours session. This morning we will hear from CAT, CHV, LLY and HON – all will be names to watch – because they include the industrials, energy and pharma sectors. Speaking of pharma – last night Novavax reported that it’s vaccine is 89.3% effective at combating the ‘new’ variant discovered in the UK. NVAX is quoted up $40 this morning or 30% at $179/$179.50.

Remember – you are a long-term investor… do not get sidelined, eliminate the noise… stick to the plan… and when the markets back off whether due to an adjustment to risk or angsts created by extemporaneous events it always creates longer term opportunities. So stay awake!

European markets are lower this morning all down just over 1% across the board. And this follows weakness in the Asian markets. The media suggesting that the unrest in the US is causing a risk off sentiment across the continent… I’m saying – not likely… maybe a tiny bit, but that is more of an excuse to explain today’s weakness. I mean, think about it – Do you really think European investors care about RobinHood or GME, AMC or Tootsie Roll (TR)? There is some anger though, in the European Union as they warn AstraZeneca to re-think their vaccine policy and that they will prevent exports of the vaccine unless they supply the Union with the promised amounts of the vaccine. Eco data showed that the French GDP came in at -1.4% vs.the -4% expected – so that is good…but doing little to help sentiment.

OIL continues to churn—trading at $52.41 – Saudi cuts and lower inventories helping to offset concerns over demand.  We remain the $50/$55 range with little chance of breaking out or breaking down.

Gold holding steady at $1,859/oz struggling to retake resistance at $1,868. If it does then $1,893 is the next trendline resistance and push up and thru that will test the recent highs of $1,960 and Bitcoin has found new life up $3600 at $36,900 – coincidentally after Lonnie Musk added a Bitcoin emoji to his Twitter profile… this morning! Whatever!

The S&P closed at 3787… after testing a low of 3755 and a high of 3830. Look for it to test Wednesday’s low of 3732 to see if it holds… A test of the 50 dma (trendline support) is next at 3710.  That will be key… because if we test and fail, then expect the automated algo’s to go into SELL mode – just because we broke the trendline… For now – I continue to believe the path of least resistance is lower… remain patient. 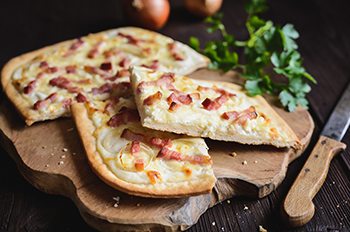 This is a great appetizer for your next get together once we are allowed to actually get together.

For this you need:  One fresh dough (you can buy it at the supermarket in the dairy section) Remove from the plastic bag – dredge in a bit of flour and then roll into a ball and set on counter allowing it to rise and warm up. You don’t want to use cold dough – capisce?

Place the cold pizza stone in a cold oven and then heat the oven to 475 degrees allowing the stone to heat up. Then remove and place on the counter.

Roll out the dough and place on the pizza stone… making sure to flour the stone first. If you don’t have a stone, you can use a baking sheet – no need to heat it up first then.

Now in a large pot – cook the bacon until crisp and then remove leaving the bacon fat in the pan. Add the sliced onions and thyme and sauté for about 10 mins on med hi. Then turn down to simmer and allow to caramelize – maybe 20 more mins. Remove from heat and let it cool down for 5 mins.

Whisk together the eggs, cream and s&p and add to the onions. Mix well. Let it cool for another 10 mins or so.

When ready – spread the mixture over the dough – leaving enough of a ‘crust’. Top with the bacon bits. Place in the oven and cook until browned maybe 15/20 mins or so… Remove – allow to cool and then cut into wedges.