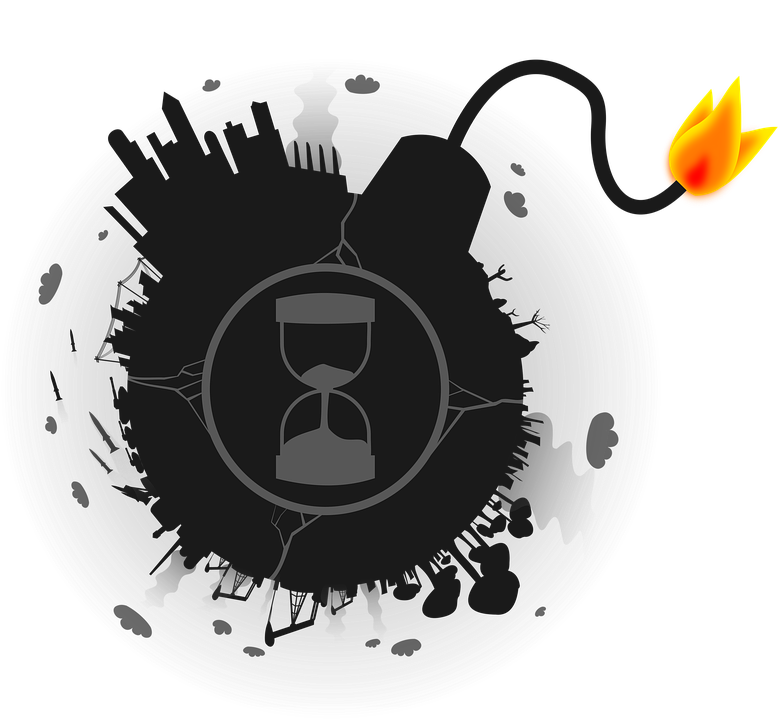 It was 1982…. the Gap Band – An American R&B funk band – that rose to fame during the late 70’s and early 80’s….3 brothers – Charlie, Ronnie, and Robert Wilson – from Tulsa, OK – brought this song (You Dropped the Bomb on Me) to the masses (it was a discotheque favorite…) – It was about a girl (it always is…) that ‘changed his world, lit his fuse, were his thrills and his pills – taking him to the sky – he was NEVER that high….and then ‘she dropped the bomb on him’…..In the end – the song lyrics say that ‘he will never forget what you done for me, baby – You Dropped the Bomb on Me……’

And so it goes….yesterday at 2 pm EST – Investors were reminded of that song….as stocks started to spin out of control after Jay – ‘changed the world, lit investor fuses, were the markets thrills and spills and then dropped the bomb’ Lighting the place on fire….….Stocks – plunged lower and then lower again as news of the FED mins ‘sank’ in…..the headlines this morning say it all…..

And again I ask – Why is anyone surprised at all……in my daily video – featured below – I broadcasted from the beach yesterday morning….where I noted that ‘the storm clouds were brewing’ right above my head….the clouds were darkening and the wind and the ocean churning (you can hear it in the video)…..It was all very prophetic…..as I discussed what we could expect….

Let me lay it out again – all the hints…First clue back in November – Jay dropped the word ‘transitory’ from the conversation – blaming Americans for ‘not understanding the meaning of the word…’  Remember that?   Then St Louis Fed President Jimmy B’s comments in December (when he was a Non-Voting member) saying that the ‘FED needed to be more aggressive and taper quicker and raise rates in tandem’ (2nd  clue), then on Tuesday – Minneapolis Fed Pres – Neely Khashkari (a Non-Voting member) – surely you remember him from the role he played in the GFC (Great Financial Crisis) – made these comments only hours before Jay was ready to ‘drop the bomb’…saying that the ‘$9 trillion balance was too large and that the FED needed to act more aggressively to shrink it sooner rather than later’……putting it out there in the public square…..so that no one can say ‘this was a surprise’!!  I mean you can’t make this up…. who would believe you?

And so, stocks sold off…. the smart logic algo’s scraping every news site out there – attempting to ‘understand’ the headlines….and they were all negative – which does what to the algo’s?  Causes them to shift into aggressive ‘SELL’ mode – while it also causes them to cancel interest on the buy side…. leaving a void in prices that then results in the ‘swoosh’ sound that you hear when you flush the toilet…… (Just makin it real….)

Recall how I have been telling you that this is one of the easy ways to play the ‘downside’ if you weren’t going to sell your names….  Something I did, because I am not selling my AAPL, MSFT, JPM, IBM, BAC, VZ, PG, JNJ etc.…. just because the algo’s go into ‘panic mode’…. Why should I?  Has the investment thesis in those names changed from Tuesday to Wednesday?  Is Apple not the stock on Wednesday at 4 pm that it was on Wednesday at 9 am?  Yes, it’s a bit cheaper, but the investment thesis didn’t change – did it?  I didn’t think so…. And – if you have been reading my daily thoughts – you would have been prepared for this…recall when I told you to ‘strap in and buckle up’, Get ready, stay focused and have your shopping list on the fridge because it was going to get a ‘bit bumpy’?  Well – here we are….

And as the media continues to dissect and digest it – expect all the analysts and talking heads to come out and try to downplay it – saying that it was the ‘natural response’, it was expected,  which leads me to ask- if it was the ‘natural response’ and that was expected what were all those buyers doing in late December when they were tripping over each other as they took stocks to 2021 highs?  Why didn’t they just wait for this pullback and the pullback that is still to come?  It’s not like you weren’t warned…. Just sayin’….

Expect to hear more about this today and in the days ahead….as everyone tries to downplay it – the same way they try to downplay all the warning signs of inflation……I guess the only positive side to this is that we won’t be talking about Covid and all its cousins today!  Note that the WHO (World Health Organization) is downplaying a new variant that was discovered in France – the IHU variant – which the experts say is ‘showing little signs of spreading- so far…’  (IHU apparently an acronym for the I Hate U variant).

In any event – US futures are lower again this morning…. Dow futures down by 30 pts, S&P’s off by 9 pts, the Nasdaq down 50 pts and the Russell is lower by 9 pts.  The focus now will be Friday’s Non-Farm payroll report……will it ‘beat the number’ the way yesterday’s ADP report did, or will it disappoint?  My guess is that it will beat – it’s just my gut….Lots of other eco data out today, but I suspect that all of the chatter will be about what the FED did yesterday and what the path for monetary policy is NOW….Clearly – the ideas that I wrote about in mid-December are now more true than the speculation about it…..Tapering will end much sooner than April, Rates will rise much sooner than May and the increment of the rise will be the next speculation….will it be 50 bps?  The market expects 25 bps – but the mkt also expected the tapering to be slow and gradual and that rates would not rise in tandem with the taper…. the reduction of the balance sheet was a 2023 event – until yesterday…. Capisce? Remember – today we will hear from St. Louis Fed President – Jimmy B- you can be sure that the markets will be hanging on his every word – trying to glean any NEW information that may have been tucked away in yesterday’s release.

Global markets all lower as well…Japan -2.9%, China -1%, Australia – 2.7%, Taiwan -0.7%, South Korea -1.1%…Chinese tech companies under pressure amid Xi Xi’s (Beijing’s) regulatory crackdown on the sector……Which again causes me to ask – why put your money in China at all?  There are so many other places to play……that will give you indirect exposure to that market without all the BS……

The S&P closed at 4700 – on the low for the day – which usually means we will test lower again today….…recall the trendline support is at 4669 – if we breach that – then the December lows should be tested – 4500 ish…. The Nasdaq has broken its short-term AND intermediate term trendlines and is about to test its long term 200 dma trendline which is 14,660.  (Just 500 pts from where it closed last night when it lost 522 pts!) – So, yes ladies and gentlemen – we could test that today……and if we did – that would only put the index down 7% from its December high – still within a ‘normal trading range.’

The consensus among street analysts is that we could see a 10 – 15% pullback in the broader market as investors adjust to the changes in monetary policy early on…but then after that happens, stocks will stabilize and push higher into year-end…..which is why I said yesterday – don’t take your 2022 retirement money and invest it all at once….’feather it in’ over time….take advantage of the coming weakness that is sure to happen as the FED pushes rates up.

Oil is up 5 cts at $77.91, 10 Yr. treasuries are yielding 1.72% and high tide is at 8 am……. It’s still dark outside so I can’t see if the storm clouds are still hanging around…. The weather report says that it is supposed to be partly sunny with a high of 77 degrees.

Now for those of you who like Potato Gnocchi – you know they can act like a ‘bomb’ in your stomach…. which is why I am giving this to you today…

For this you need: 1 lb. of frozen Gnocchi (unless you want to make them yourself), butter, sage leaves, red pepper flakes for ‘bite’ and some shaved Parmegiana cheese….

Bring a pot of salted water to a boil….

In a large sauté pan – you want to melt 1 stick of butter over med heat – just until it bubbles and starts to turn brown and nutty.  Then REMOVE from the heat.

Now – put the frozen Gnocchi in the water and wait for them to all float to the top – boil for another 30 seconds and then using a slotted spoon transfer them to the sauté pan with the brown butter.  Return this pan to med low heat.

Add in the chopped sage (not too much), the red pepper flakes and a tiny bit of the pasta water…. maybe 3 or 4 tablespoons…. toss and then add some of the shaved parmigiana…. now divide it up into individual servings and use the rest of the cheese to adorn each plate and then serve.  I like a chilled bottle of Pinot Grigio Santa Margherita with this.