You can’t accuse JPMorgan Chase of being bashful.

The heft — and, at times, bravado — of the nation’s biggest bank by assets was on full display Tuesday during its annual investor day. During several hours of presentations and discussions with analysts, JPMorgan executives laid out the company’s plans to expand in the years ahead by hiring hundreds of bankers, building branches and beefing up its digital offerings.

“Retail distribution is like a muscle,” Chief Financial Officer Marianne Lake said in discussing the company’s recently announced plan to open 400 branches in up to 20 new markets. “You have to exercise it or it goes to waste.”

Nonetheless, the New York megabank raised eyebrows when it said it would invest an additional $1.4 billion in technology in 2018 — the driving factor in projections for noninterest expenses to rise 6% in the year ahead. 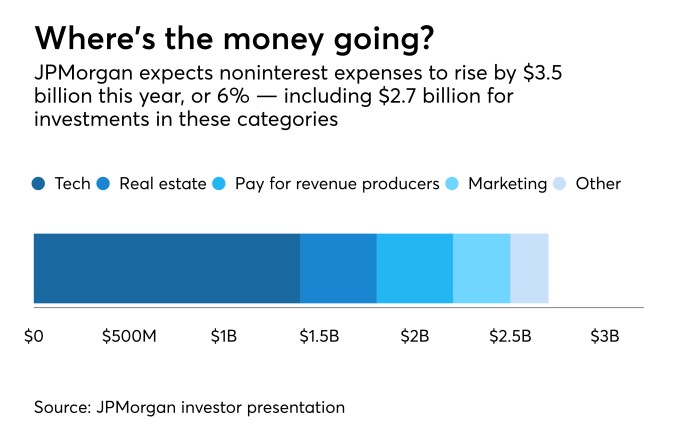 The tech investment will fund what executives called JPMorgan’s “digital everything” model, including new mobile features and back-office uses of the blockchain.

In some sense it is par for the course at a company that has invested heavily in tech for years to differentiate itself in a highly commoditized industry.

But the slew of questions JPMorgan executives faced — namely, will the tech investment actually pay off? — underscores just how strongly it is betting on an uncertain digital world, where costs are high and returns are tough to estimate.

During a Q&A session, CEO Jamie Dimon made a number of references to the tech giant Amazon, praising the online retailer’s approach to investing heavily in customer experience and making unexpected moves, such as its entry into the moviemaking business a few years ago. Discussing JPMorgan’s investment strategy, Dimon used CEO Jeff Bezos’ famous quote: “Your margin is my opportunity.”

When an analyst in the audience noted that Amazon for years has sacrificed profits in favor of winning market share, Dimon reiterated that JPMorgan — which has recently produced industry-leading returns — will not let its profitability slip in the years ahead.

“We’re not going to lose our financial discipline because we have to make an investment that we have to do or want to do,” Dimon said.

According to JPMorgan’s financial projections, that won’t be an issue in the year ahead.

Lake discussed the financial targets in a whirlwind, 90-minute overview of the company’s strategy. The format was a change from previous investor days, when CEOs from JPMorgan’s four major business lines discussed their projections for the year ahead.

A mix of loan growth and stubbornly low retail deposit prices is expected to boost profits in 2018. Net interest income is expected to rise by 7%, largely due to stronger lending in the consumer and community banking division, which includes credit cards, home lending, business banking and other businesses.

“Through our scale we have built the best global banking platform for our customers,” Lake said.

Notably, during a Q&A session with the business line CEOs, Gordon Smith — who holds the dual titles of co-president and head of the company’s consumer and community banking division — discussed how JPMorgan plans to integrate new technology into its branch expansion.

Adding branches in Boston, Washington and other new markets is expected to drive growth in JPMorgan’s mortgage business, according to Smith. While the JPMorgan consumer bank reaches 61 million households, only 5 million of those households have a mortgage from the company.

“As you know, realty is an exceptionally local business,” Smith said.

He added that investments in big data will help the company identify new mortgage customers, while improvements in the company’s digital mortgage applications will give the customers the option to complete the process from the comfort of their own homes.

“A customer will build in their own mind, when I’m ready for a mortgage, I’ll go check in with Chase,” Smith said, describing the company’s mix of digital offerings and brick-and-mortar offices.

Throughout the day, JPMorgan executives also emphasized the importance of maintaining a mindset of scrappy competitor, despite the company’s size, as it competes with upstart digital firms and banks across the industry.

“The things that kill companies: complacency, arrogance, lack of attention to detail,” Dimon said. “And bureaucracy, which I think is a deadly disease.”

Kristin Broughton is a reporter for American Banker, where she writes about the business of national and regional banking.

More from this Author