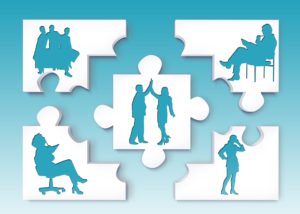 HOPE is alive!!! Stocks surged – bucking the trend seen around the world on Friday. Asian markets went into the weekend a bit weaker and the Europeans followed suit with all of those major market centers shedding some 1.5% across the board as the Friday “virtual” happy hour took place. US stocks – which were trading higher in the minutes prior to the opening bell – ended the day even higher, going into the weekend as if there isn’t ‘anything going on in the world’ – as if it was just another Friday in April! By the closing bell – stocks and all of the indexes celebrated – led by tech (again) causing the Nasdaq to win the prize for the day – ending up 139 pts or 1.6%, the Dow added 260 pts or 1.1%, the S&P, not to be left behind, advanced 38 pts or 1.4%, and the Russell adding 18 pts or 1.56%. Now – on the week though, stocks ended lower, with the Dow falling 1.9%, the S&P fell 1%, the Nasdaq lost 0.5% and the Russell flat.

Does it get any better than this? Even oil, which got slaughtered in the early part of the week – ended the day +4% and the week +170% ($6.50 – $16.94) higher. This morning oil is under pressure and is down by $2.17 or 12%. It’s a two-part story – first is concern over storage in Cushing, OK, as it is rapidly filling up and cuts to production do not appear to be enough to help balance the supply/demand narrative.  Cushing is the delivery destination point for WTI (West Texas Intermediate) and that facility is already 70% full and the remaining 30% has already been leased leaving nowhere else to go but the tankers that I discussed on Friday. Rig counts in the US are at 2016 levels, while rig counts in Canada are at levels not seen in two decades. The Permian Basin (West Texas) and parts of New Mexico accounting for 60% of the shutdown here at home while OPEC and its members are due to cut production by 9.7 million barrels per day starting next week.

Part Two is the story below – and this should come as no surprise – more bankruptcies are coming and last night we learned that Diamond Offshore has filed for bankruptcy protection. Now this is fairly significant because this is a BIG one – Diamond is a LARGE CAP stock – so this is a story! Most of the ones that have already announced bankruptcy protection are mid and small cap names – significant enough, but nothing like Diamond. Bloomberg’s description on the DO (Diamond Offshore) Equity page sums it up nicely:

”Diamond Offshore Drilling, Inc. is a global offshore oil and gas drilling contractor. The Company is a deep water driller that serves markets that include the deep water, harsh environment, conventional semisubmersible, and jack-up markets. They are capable of descending to depths greater than 10,000 feet. (Remember a mile is 5,280 ft). Diamond Offshore has 17 offshore drilling rigs, including four drillships, plus seven ultra-deepwater, four deepwater and two mid-water semisubmersible rigs. This fleet enables the company to offer services in the floater market on a worldwide basis. A floater rig is a type of mobile offshore drilling rig that floats and does not rest on the seafloor.”

Get it? This isn’t your mother’s local drilling rig on the plains of Texas. The story says that they filed for bankruptcy protection in Texas on Sunday evening – after they recently skipped an interest payment while at the same time retaining “restructuring advisers” (note the s – means plural, means multiple advisers and just think about the lawyers!  – Capisce?) The story goes onto say that day rates and demand for its services has “worsened precipitously” as the price war between the Saudis and the Russians escalated and demand for oil got whacked by the virus. Do you think? And this will be the headline for so many others that have yet to declare – and it will take its toll on investor psyche and market action at least until there is some clarity. It will though also create opportunity for the savvy and experienced Distressed Fund Manager that sees an opportunity like this come around only a couple of times in a 30-year career.

Overnight – the weakness in oil is going unnoticed around the world for now as global markets played catch up with the US’s Friday advance. The Bank of Japan (BOJ) announced “enhanced measures to their monetary policy plans” as they continue to battle the damage done to their economy. What did they do? They are increasing their purchases of commercial paper, corporate bonds, government bonds and treasury discount bills. They also kept short term interest rates at -0.1% and 10-year rates at 0% re-iterating that they also stand ready to “do whatever it takes” – following in the footsteps of the latest moves by the FED and the ECB. China reports that industrial profits fell by 35% (if we believe them) and investors seem to be looking the other way. By the end of the day Japan was +2.7%, Hong Kong +1.88%, China +0.68% and the ASX added 1.5%.

European stocks are marching higher as their day begins. Data over the weekend showed a significant slowdown in deaths in Spain, Italy and France just as these countries begin to turn the switch on. The Italians seeing the biggest moves after they avoided a ratings downgrade. Earnings were mixed while forward guidance remains cloudy – Deutsche beats on earnings but warns of “looming defaults.” Adidas reported its first quarterly loss in four years as the virus forced the closure of 65% of their stores. Thursday brings the ECB policy statement and it is the biggest week for earnings.

US stock futures are surging and HOPE remains alive! – Dow futures + 258 pts or 1.09%, S&Ps are up 30 pts or 1.03%, Nasdaq +118 pts or 1.35% and the Russell is ahead by 22 pts or 1.85%. Apparently the algos are ignoring the fall in oil as they focus on re-starting the economy. This is a big week for macro data around the world which will in part detail the extent of the damage to the global economy. Until we can see through the clouds the biggest risk for global markets is a pre-mature opening of the global economies resulting in a second wave of virus cases that would force another shutdown.

Social distancing is now a term that defines the new normal – how long will it be before we can hug someone? (Because you know this is not me at all!) Look – we are starting to do even more testing – and what I hope we find out is that there have been more people exposed and recovered than we originally thought. If that is true then the stats that we believe to be true today will not be true tomorrow and that might help change the narrative, and that should help us return to a more normal life.

Economic data today includes: Dallas Fed Survey – exp of -75. Later in the week we will get monetary policy decisions from the FED, the ECB (the BoJ announced this morning). On Wednesday we will also get the 1st report on 1st quarter GDP – and it will be UGLY. There is no sugar coating this – estimates call for a -3.9% vs. the 4th quarter’s +2.1% rate. In addition, we will get Retail Inventories, Pending Home Sales, Richmond Fed, Personal Income, Personal Spending, another hit to Initial Jobless Claims and Continuing Claims, ISM Manufacturing, Construction Spending and Factory Orders.

The S&P closed at 2836, after once again testing the 2850 level – the most recent high that it attempted to pierce last week and once again failed. Now – this morning, futures are up 25 pts and if it holds that will take us up and through allowing the market to test the most recent intraday high of 2879. If global markets are any indication, that is very possible. The tone today is RISK ON – so stay tuned. 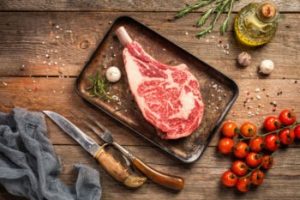 This is one of my favorites and reminds me of being a student studying in Florence during my junior year semester abroad (Fall 1981). 20 years old – living in Florence… Do I need to say any more?

Start with a nice Rib-Eye – always on the bone as the bone provides so much more flavor and makes a nicer presentation for your dinner guests.

Leave on a platter for about 20 mins so that they get to room temp. In a food processor blend the pork fatback, garlic, rosemary to a paste like consistency. Next – wash your hands and massage this mixture into the steaks – taking time to make sure that you have worked the meat and the mixture well. Now season with S&P. Set aside.

Light the grill – heat to high and allow the grill time to heat up – it has to be nice and hot. Place the steaks on the grill and cook for about 5 min/side – depending on thickness. This will result in a med rare steak… so if you add a couple more mins on each side you will get a more cooked center.

Remember though – when you remove the steaks from the grill – you will cover and let them rest for 4 mins allowing them time to continue cooking and allowing for the juice to flow.

Once ready serve immediately on warmed plates. Accompanied by both a starch and a vegetable. Garlic herb rice and Brussel sprouts* are a good option or mashed potatoes and peas – along with a mixed green salad with red wine vinaigrette dressing.

*Brussel sprouts – the easy way. Clip of the ends of the sprout – rinse and drain and place in baking dish with diced bacon. Season with s&p, fresh lemon juice and 1/2 stick of butter – cut into pieces and place strategically around the sprouts. Cover and place in oven – preheated to 400 degrees. Cook for 35 mins and then place under the broiler just to crisp them up a bit. Test with fork to determine readiness.

Enjoy this steak with a robust red wine.