Yes, we’re open! Stocks around the world finished higher yesterday as the signs on the door went from “Come Back – We’re Closed” to “Come in – We’re Open!” The feel good tone which started in Asia – worked its way around the world – sending European markets higher and then igniting a flood of BUY orders here at home as investors are betting that all of the stimulus measures offered up by the FED and the Trump administration will be enough to help us turn the corner. Georgia led the way – allowing stores, gyms, hair salons, nail salons, etc. to return to work as the rate of new infections appear to be slowing. But let’s be clear – the future remains highly uncertain – because the fear is that if we see a resurgence in infections and they shut us down again it won’t be pretty – although as we see what is happening in Asia and now Europe it doesn’t feel like that will happen – but as we know there are no guarantees. The excitement began in the overnight session and continued all day long in regular trading. By the end of the day – the Dow added 358 pts or 1.5%, the S&P gained 42 pts or 1.47%, the Nasdaq surged by 95 pts or 1.1% and the Russell (won the prize) and gained nearly 4% adding 48 pts.  It was feel good day!

The macro data confirming the pandemics toll are seen everywhere. This week we are pulling back the curtain and will get a glimpse at even more data points that are sure to tell that story. While the algos are taking stocks higher individual companies continue to be cautious as so many cancel stock buyback programs and eliminate dividends – GM being the latest as they announced that move just before the 9:30 opening. Yet the algo’s loved it and took GM up 2.3% (50 cents) to end the day at $22.45. Apple on the other hand announced that they are pushing back on restarting their production of new iPhones and the algos had a field day –  punishing them early on – sending the stock down $2 before changing their mind and taking it up $4, then changing their minds again taking it down $4 before it settled in up 20 cents at $283.17.

On the credit side the turmoil is sure to upend the markets and trigger a wave of bankruptcies not seen since the GFC (Great Financial Crisis) crisis. Retailers – already announcing that they are seeking “protection” while others are getting in line will join the many energy companies that have already announced as well. The concern is that the pressure created by the virus will begin to infect other industries including healthcare, autos and travel and leisure. And while bankruptcy doesn’t always mean liquidation – it does create angst and opportunity for investors and fund managers as companies seek to ‘re-organize their capital structures and operations versus complete liquidation. We are about to see what that looks like in the weeks and months ahead. Now the fear is that IF the recession is worse than expected then we could experience a second wave of “protection” announcements as companies crack under the weight of the additional debt taken on during the crisis. Which is exactly why – you have to know what you own and you have to do your homework – talking to an advisor is a smart thing – leaving it on autopilot or making rash emotional decisions is exactly what you shouldn’t do.

Get ready for oil to crash again! Yesterday it fell 25% as we prepare for the June contract to expire as storage capacity fears increase and demand dries up – it feels like an instant replay of the collapse that happened only 2 weeks ago. Overnight oil fell another 20% – approaching $10/barrel as those fears intensify. Get this – $10 is a level that you have to understand – because after the last collapse – the CME changed the margin rules and a trade at $10 will ignite a wave of margin calls across oil patch. You know what happens then, margin calls force selling as investors/traders need to raise cash to meet those calls. And if that is the case – expect the buyers to get out of the way – as they expect a wave of sell orders to hit only amplifying the move lower. This morning we see that oil traded as low as $10.07 before rallying $2 – and now trading at $12. The USO – the United States Oil Fund – is making headlines again as that fund is selling all of its June contracts and rolling out to the summer and fall contracts confirming the weakness that the data shows as more producers cut production trying to combat the destruction in demand.

Today starts a host of data points, both macro and micro. Wholesale and Retail Inventories, and the Richmond Fed Survey- kick it off while the FED hunkers down and begins their two-day “quarantine” before announcing their rate decision tomorrow. What are they gonna say that we don’t already know? Nothing, are they going negative – NOT, are they raising rates – NOT are they announcing anything new – NO. What they will do is re-iterate what we already know and that they still have plenty of tools in the toolbox and are ready to deploy them in the event we need them as they try to keep the markets calm.

On the earnings front – we will hear from PEP, CAT, XRX, MMM, LUV, UPS, BYD, and GOOG along with at least 25 other names.

US stock futures are surging again as the excitement builds over the coming re-opening of the US economy – while the market continues to ignore the fall in oil.  Dow futures + 317 pts or 1.32%, S&Ps are up 33 pts or 1.13%, Nasdaq +109 pts or 1.27% and the Russell is ahead by 18 pts or 1.42%. Remember – the market is “forward looking” and is trading on what it thinks will happen 4 – 6 months out and it appears to like what it sees. Now, yes – everyone wants to see what it looks like 4 – 6 months out but we have to get through the next 4 – 6 weeks first. And the move to re-open will be front and center as we all realize what the new normal will be. The action that has pushed the market higher is all about the re-start and the recovery in the economy and we can see that in the groups that led and have been leading the latest surge. Cyclical names led by Industrials, materials. financials and energy all performing well. Even the small caps are having fun – rising 22% since April 2 and more than 34% off the March lows. But let’s not kid ourselves – there IS a disconnect right now – the data suggests one thing, while the FED has almost guaranteed another thing! Capisce?

Overnight – the weakness in oil is going unnoticed again around the world as global markets continue to surge. While the macro data around the world continue to be weak – investors have been prepared for that and are looking further out and will continue to look out until another unexpected event comes out of left field. European stocks are marching higher as their day begins.

The S&P blew right through 2850 ending the day at 2878, doing exactly as I noted in yesterday’s blog:

“Futures are up 25 pts and if it holds that will take us up and through allowing the market to test the most recent intraday high of 2879. If global markets are any indication that is very possible. The tone today is RISK ON – so stay tuned.”

We are well above the 50 DMA at 2797 – so that now becomes support! All eyes are now keenly focused on both the 100 and 200 DMAs which stand at 3007 and 3025 respectively as they represent the next real level of resistance. The decisive surge yesterday that took us up and through what has been resistance – is now the fuel that will surely take the market higher in the days ahead. And if this is true then Jeff Gundlach of Doubleline – is sure to get a splitting headache. He talked his book yesterday on CNBC telling everyone that he is shorting the market because he thinks a retest of the March lows is very plausible because “people don’t understand the magnitude of the social unease that’s going to happen when 26 million people have lost their job.” Now I too – believe that a test lower is still possible – but I thought that test would be at S&P 2500 – NOT S&P 2200. After the latest surge – I am moving my downside target up to 2650. So – let the games begin… 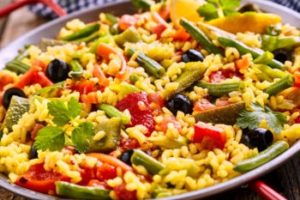 Like traditional paella – this dish is relatively easy to make and you can easily increase the amount of ingredients to feed a large number of people. It features no meat or fish is only veggies and rice – made with the traditional paella seasoning. Try it – You’ll like it.

If you do not have a Paella Pan – no worries… you can use a large nonstick frying pan to accommodate this typical Spanish rice dish.

Begin by heating olive oil in the large nonstick skillet over medium heat. Add bell peppers, garlic and scallions, cook 5 minutes. Next add the broth. Stir in saffron, bring to a boil. Add rice and stir – reduce heat to medium-low, cover and cook for about 10 mins.

Next – add the broccoli, peas, tomatoes, and olives over rice. Cover, and cook for about another 15 mins…or until rice is fluffy and tender. Remove from heat. Let rest, covered, 5 minutes. Taste and adjust for seasoning. You can present this on a large family style platter garnishing with lemon wedges and chopped parsley.