Stocks rose on Tuesday – as the excitement builds. The country is preparing to re-open. President Trump announcing that he is winding down part of his “virus task force” while California laid out its plans to “wake up.” Florida is following suit with all the others falling in line as they consider what is the next level of “essential businesses” in the fight to regain some sense of normalcy. The idea in California is to start with curbside pickup as soon as Friday thereby avoiding “crowds” of people anywhere we go. Florida with a population of 21 million people has already begun to re-open, causing concern for residents living in the Palm Beach, Broward and Miami Dade Counties that represent 30% of the state’s population. Apparently, there is a fight going on – but the Governor is determined to get it going. All this while Massachusetts Governor Charlie Baker is demanding his 6 million residents wear face masks whenever you leave the house – no matter what, otherwise you risk a $300 fine! (anyone under 2 years or anyone with a medical condition that prevents a mask is exempt). NY’s Governor Andrew Cuomo told us that infection rates and deaths are falling but he is still fighting a re-opening as he tries to figure out what to do with the subway system and the homeless population. You can’t get around NY without the subway and who is gonna do that right now with the homeless “sheltering in place.”

This caused stocks to rise as the algos took them higher again – suggesting that this is the worst of it. It can only get better from here. We can only hope – because if there is a resurgence in infections you can bet that as fast as the algos took stocks up. They will take stocks down. US futures had suggested strength in the pre-dawn and that strength continued all day, leaving the Dow + 133 pts or 0.56%, the S&P up 25 pts or 0.9%, the Nasdaq up 98 pts or +1.13% while the Russell rose 9 pts or 0.75%. Beyond that – the market is also looking at what Europe is doing as well, because in order for the world to heal. They have to get back to work too. The next two months will be important as we see attempt to “set the pace” on re-opening without setting off a new round of infections and that is what is driving the markets around the world.

So the question now is – are stocks undervalued, fairly valued or overvalued based on the current state to affairs? Well – that depends on your point of view – if you are concerned that a second wave is coming then you are in the overvalued camp expecting another selloff anytime now. If you think we are out of the woods – then you’re probably in the undervalued camp as the analysis tells us that the markets will surge if that’s true. The action of late appears to suggest the latter – but don’t expect the volatility to subside just yet. The macro data continues to paint a bleak picture and the market is still healing from the damage created by the onset of the virus and the forced shutdown of the global economy.

This morning we find out that the Eurozone is suffering more than initially expected. Macro data points are weak. April PMI for the whole “zone” expected to fall 7.7% sending unemployment soaring and public debt levels surging and this is causing the rift between North and South pushing the European bloc closer to a breaking point. Output in Italy, Spain, Portugal and Greece expected to fall more than 9%, while output in Germany, France and nations to the North expect a decline of less than 7% and that leaves the huge gap in finances without some coordinated rescue plan and the fear is that those differences put the very stability of the whole region at risk. EU financial affairs Commissioner – Paolo Gentiloni makes it clear in his most recent statement:

“Such divergence poses a threat to the single market and the Euro area – yet it can be mitigated through decisive joint European action.”

The forecast underscores the deep concern following the shutdown. Look – the expectation was for output to rise by 1.2%. Now it’s expected to fall by somewhere between 6% – 9% with the risk that even that projection is off – especially if there is a resurgence in infections – and if there is, growth is expected to drop by more than 12%! So – there is still a lot of uncertainty surrounding the awakening especially after the top German court issued a surprisingly controversial ruling yesterday which questioned the ECB’s (European Central Bank) asset purchase programs. You see – the ECB is the bloc’s bank – much like the FED is the US bank. The difference here is that the ECB must deal with 19 different nations, 19 different cultures, 19 different economies and 19 different leaders and as you can imagine – it ain’t easy!

European markets were all lower – but have since attempted to rally although it doesn’t feel like there is any conviction today. Earnings season is coming to a close so the focus returns to the broader macro data and what’s next for the markets. Today also brings us March Industrial Production Orders in Germany and March retail sales across the bloc and like here in the US – there is a real possibility that the actual reports are worse than expected. The BoE (Bank of England) will present their policy outlook tomorrow – no change in rates is expected, but investors will listen intently to the tone of this announcement. Will they follow in the footsteps of the Fed, the ECB, the BoJ (Bank of Japan) and re-iterate the “do whatever it takes” mantra or not? My guess is yes, so that should limit the downside.

US futures are up again, and up nicely. Dow futures are up 222 pts, S&Ps +26, Nasdaq + 80 and the Russell up 12 pts. Trump concedes that in order to get the country going again – he is risking an initial increase in infections and deaths, while also arguing that not re-opening will cost people their lives in other ways. Since someone needs to make the decision to “get up and get going” it needs to be him, recognizing that his re-election could be won or lost at his moment. Futures are suggesting – as noted above – that the country wants and needs to get back to work and that some “low” level of resurgence is expected. But where that line is – is anyone’s guess. The Fed Vice Chairman Ricky Clarida told us yesterday that he expects that more monetary support will be needed, and more government support will be needed in order to support the economic re-birth. But again – the question remains – Has the market moved too quickly based on the current situation?

Oil rose by 20% yesterday closing at $24.56. Today it is up another $ 0.80 at $25.41. Oil is now up 300% off of the April 21st low of $6.50 and appears to want to go higher and test the downtrending moving average that now stands at $28.16. Yesterday I told you that I thought the two would collide at the $25 level – not expecting that 20% rise yesterday. So now it looks like they might converge at the $27 level. Either way – the question remains: What happens when that happens? Will we find resistance or not?  Has oil been under pressure long enough that it wants to just explode higher? Will the re-awakening of the world cause demand to surge? Yes and yes. So hold on – it is sure to be exciting.

The S&P closed at 2868 and appears to want to revisit the April high of 2930 which leaves us in the trading range of 2750/3000. I suspect that we will remain in this range for a while until we get more clarity on what happens next. As noted above – if we reopen and there is no resurgence of infections – I would expect the market to rocket higher up and through longer term resistance as investors celebrate the re-awakening. If there is a resurgence – then I would suspect that the sell off will be painful as the algos will run wild. So – be patient – don’t go chasing –you’re not missing out if you have a portfolio.  And if you don’t find an advisor and start to put one together. Call me to discuss. 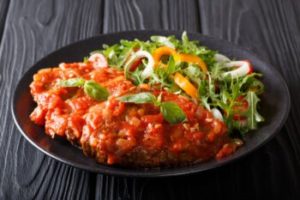 You will need a couple of things: A nice rib eye, or T-bone – (about 3/4″ thick), Olive oil, Oregano, garlic, onions, red and green bell peppers, can of crushed tomatoes (not puree), some red wine, salt and pepper…

In a sauce pan – heat olive oil and add crushed/sliced garlic and move it around for a couple of mins until it is nice and golden… add a sliced white onion and julienned bell peppers – turn heat to medium and cover. When the onions and peppers are soft (about 5 mins) add the crushed tomatoes, oregano and **red pepper flakes. Turn heat up and bring to a quick boil then reduce heat to medium. Add red wine (about 1/2 cup) salt and pepper and let simmer and thicken up… about 10 / 12 mins.

Next – rub steaks with olive oil, salt and pepper – do not drown the steak in oil – just enough to massage the steaks and prepare them for the skillet. Heat skillet (high) and add steaks (if you have a ribbed skillet this works best) You can sear for about 4 mins then turn over and continue cooking for another 4 mins.  Then add the tomato sauce to the skillet –  cover and turn heat to simmer and cook for another 10 mins.  This should give you a nice medium steak – If you prefer you can let simmer longer for more well done.

When done – remove steaks from skillet – slice into thick strips and arrange on plate.  This should be enough to feed 4 adults. Next – stir the sauce in the skillet pan to deglaze – making sure to scrap the pan for any bits left behind. Spoon sauce over the steak and serve immediately. Present this meal with a large mixed salad of Arugula, Boston Bib & Romaine topped with tomatoes, red onions, cucumbers – dressed in a red wine vinaigrette. For wine – enjoy a nice Brunello di Montalcino.