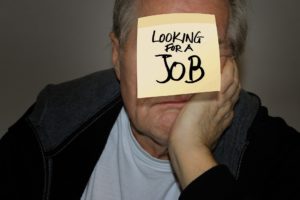 It’s a tug of war – one day it’s the bulls and then the next it’s the bears. The market continues to struggle, looking for direction as the fight over historically weak macro data and even weaker earnings coupled with the ongoing implications of the virus cause investors/traders and the algos to remain skittish. Arguments over if we should reopen the economy, or when it should happen, how should it happen and will life ever return to any sense of normalcy take place 24 hours a day, ripping apart families, friendships and destroying businesses and economic activity around the world.

The market did open on a plus tick on Wednesday even after the historically weak ADP employment report hit the tape – by now you know that this monthly report showed that we lost 20,200,000 jobs since it was last reported – a number that was not unexpected – but is horrifying just the same – losses forced upon us by an invisible enemy unleashed upon the world sometime in late 2019. The buoyant mood not lasting too long as the algos first bought shares, then sold them, then bought them again and then sold them hard into the bell as they tried to interpret the data points and take in the latest news out of Europe – that their economies are about to suffer a “recession of historic proportions.” By the end of the day – the Dow had given up 218 pts, the S&Ps lost 20 pts, the Nasdaq – bucked the trend and rising 45 pts as investors continued to buy up technology stocks and the Russell lost 10 pts. With the exception of the tech sector – all of the other sectors suffered losses with energy (XLE), financials (XLF) and consumer staples (XLP) losing 2%, 2% and 1% respectively.

As we talk about “waking up from this nightmare” so much remains unknown and as we test more and more people. It becomes clear that the number of cases will continue to rise – now beyond 1.2 million people. But again – let’s put this in perspective – as we test more people we find out that many more than initially suspected have had the virus and survived sending the number of active infections and deaths plunging and this should be seen as a positive. Yet the media continues to tell the story from the negative – accentuating the horror stories and whipping up hysteria. Elected officials remain split right down the middle – mostly along party lines –  over if, when, and how to re-open the country. Yesterday morning we heard from NYC Mayor Billy DeBlasio – who  told CNN that NYC was unable to reopen because it doesn’t have the money and is looking for the federal government to “fund the cities operations and payroll.” How many other cities are going to stand up and make that same claim? This is on top of the threat to arrest people (and put them where?) if they gather in central park now that the weather is turning nice. While in other states – people are slowly getting back to work and businesses are slowly re-opening – albeit differently than before – but they are waking up.

Grim economic data is not helping the story one day sending stocks lower, while the same grim data the next day is seen as a reason to buy stocks – suggesting that “it can’t get any worse.” Today’s Initial Jobless Claims number is expected to show another 3 million people out of work while Continuing Claims surges past 20 million and tomorrow’s Non Farm Payroll report is also expected to mimic yesterday’s ADP report – detailing how we lost 20,500,000 jobs in the past month leaving many to ask if this really is the bottom or is there more to come? Philly Lawlor – Managing Director of global research at FTSE Russell had this to say yesterday:

“We’re seeing data that’s just off the charts. Has the market fully discounted all of this?  My suspicion is that we haven’t yet reached that point.”

I would agree, which is why I think the market is headed for another test lower – not a crash, but just a push lower as we begin to wake up. While there will be an economic recovery, it will not come as fast as we initially suspected. The steep and swift decline in March – sending stocks down by 30% from the February highs – has been met with an almost equally swift advance sending stocks up 50% from the March lows – puzzling nearly every economist and analyst out there as everyone tries to explain it away. The only sector that has almost fully recovered is technology – which is just about flat with January 1st but still about 10% below the highs hit in February. Contrast this against the Dow which is still off 17% and the S&P which is down by 11% from their January 1st levels while being still 19% and 15% lower from their highs in February as well.

European stocks are trading higher even after announcing that ‘historic recession’ that is about to hit them in the months ahead. Focusing on the virus – the media once again tell us what? The headline says the virus has now “killed” 263,000 people out of 3.7 million confirmed cases (7%). What if the headline read that 3.4 million people have survived out of the 3.7 million confirmed cases (93%). Does that suggest a different tone? Does that suggest anything at all? Next up – the BoE (Bank of England) as expected held interest rates unchanged at 0.1% and did say – like the rest of them – that they stand ready to take further action if the economic crisis gets worse!  OK – get ready because it is getting worse, unless of course you think that we hit bottom, in that case it’s only getting better!

US futures are markedly higher! Go figure as the data is expected to be harsh again today and tomorrow – but that is also the curse, right? We know the data is going to be ugly, this isn’t a surprise, and if the market is in fact a discounting mechanism, then this should all be priced in… and yes – investors/traders and algos should be buying stocks – because you are either buying or selling based on what you think the market will be doing 4-6 months out. And this morning, futures are telling you that the future is brighter than it is today… Dow futures are up 307 pts or 1.3%, S&P’s are gaining 40 pts or 1.4%, the Nasdaq continues to outshine – rising 135 pts or 1.5% while the Russell is surging by 22 pts or 1.8%.

Oil fell yesterday – taking a breather after the recent surge that took oil up 300% from the April lows of $6.50 and this morning, oil is once again moving higher — up 9% at $26.13.  Crude imports to China showed an increase and that is the story today. Imports climbed 10.4 million bpd in April vs. the 9.6 million bpd in March, suggesting that when countries come back online, then demand for oil should rise and if that happens the supply glut that currently exists will disappear. We are within $1 of kissing the downtrending 50-dma trendline….when we do ”kiss it” will we be met with resistance or will the markets embrace it and push up and through? I think we push up… I think oil settles back in the $30 range.

The S&P closed at 2842 – backing off of the most recent highs at 2890 but clearly wanting to challenge that this morning… with S&P futures trading up 40 pts, 2890 is within sight. If we manage to pierce it – then 3000 is the next stop – which also happens to be the intermediate and long term trendlines which will certainly prove to be significant resistance. We remain in the 2730-3000 trading range and the next move will be determined by what happens when we begin to re-open. A resurgence will prove harsh for stocks, while no resurgence will be a positive. But beware – the talk now from the medical community is that children that show no signs of infection are starting to show signs of other illnesses, while maintenance medical procedures for many Americans —  which have been put off due to sheltering in place — come back to haunt the country.

It’s always something… So – be patient – don’t go chasing. Talk to your advisor and stick to the plan. Call me to discuss. 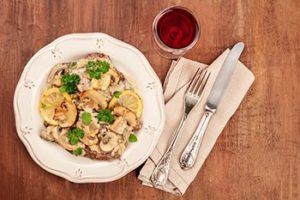 Soak the dried porcini in 1 cup of warm water for about 1/2 hr.  Once soaked – remove with a slotted spoon – next line a strainer with a paper towel and strain the soaking water into a bowl and set aside.  Rinse the porcini in cold water to remove any grit then large chop – set aside.

Next rinse the fresh mushrooms then cut into thin slices – set aside.

Add the butter and the sage into a sauté pan and turn heat to med high..add a touch of olive oil to prevent the butter from burning.  Next add the veal scaloppine so as not to crowd the pan.  Brown well on one side – then flip and brown the other side…you should probably cook for about 4/6 mins total….they should be pink on the inside…..

Add the wine and let it boil – after 30 secs or so…remove the veal and place on a plate.  continue to steam the wine – scraping the bottom of the pan until all the wine is evaporated.  Now add back the mushroom water..and the porcinis to the pan….stirring – allowing all of the liquid to evaporate….. Now add the fresh mushrooms and the chopped parsley.  Season with s&p – turn heat to low and cover pan….the fresh mushrooms will make their own juice – keep cooking – stirring every once and a while – remove cover until the juice evaporates.  Now add back a splash of white wine and the heavy cream and stir until it becomes a little thicker – 3 or 4 mins.  Now – season the veal with s&p and add back to the pan – leaving long enough just to reheat.  Turn them once or twice to assure even heating.

Present on a warmed plate and serve this dish with steamed asparagus – seasoned with s&p and a dab of butter.  Prepare a salad of arugula, Boston bib and maybe some fresh spinach.  Add red onions, cucumbers and sliced tomatoes.  Season with s&p, oregano, a squirt of fresh lemon juice, red wine vinegar and Olive oil.    I like a nice Merlot with this meal as it is a medium bodied red.