33 Million Americans Have Filed for Unemployment 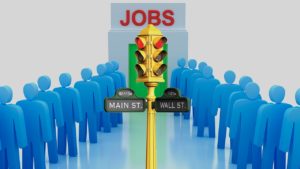 33 million Americans have filed for unemployment since the country went on lockdown, another 3.1 million Americans joined the ranks last week, Nieman Marcus joins J Crew and files for bankruptcy – expect more to follow, United Health is set to offer $1.5 billion of discounts to customers and mall owner Brookfield Properties will spend $5 billion to assist retailers hit hard during this crisis and 85 companies so far have announced plans to cut or suspend their dividends. Oil continues to surge on hopes of better days ahead as demand picks up, while production cuts begin to make a dent in the glut of supply and the Nasdaq goes POSITIVE on the year!  It’s almost surreal – as most of the country remains on lockdown – sheltering in place.

Stocks continued to rally yesterday seeing strength in the pre-market session which led to a strong opening as the indexes all surged. The initial pop came under pressure as the S&P approached 2890 ish…not sure where it wanted to go – falling back to 2877 – still well in positive territory, churning before getting the strength and courage to challenge 2900 once again. By noon – the S&P had pierced the century mark trading as high as 2901giving new life to an anxiety filled market.  While the S&P and the others was advancing the Nasdaq stole the show – surging and closing in the PLUS column for the year! Yes – you heard me correctly – the Nasdaq is now up on the year – but still below the highs of February, but compared to 2019 – the Nasdaq has now once again taken command of the markets attempting to lead the way out.

All kinds of tech enjoying the spotlight as the world remains in an almost comatose state – suggesting that the abrupt transition from “normal to abnormal” will clearly benefit our reliance on technology.  And that is clear as the demand for anything ‘tech’ accelerates.

MSFT +16%, APPL +3.5%, AMZN +28%, ZM +144%, CTXS + 30%, DBX + 21% & NFLX +36%, PYPL +36%  are only a few of the names that have surged in value  – regaining all of the losses suffered in March only to surge well into positive territory as the market rebounds. Now the XLK – the Tech ETF is only up 3.5% on the year and so you ask – how could that be?  Simple… the ETF has names in it that have and are still underperforming, weighing on that stock. once again making it clear that active investing is the winner in such a volatile environment. Period.

Financials which have been under pressure of late rose 2% – leaving that ETF – XLF just kissing its down trending trend line. Energy – XLE – which has been on fire – rose another 2.6% leaving it well above its down trending trendline. Consumer discretionary rose 1.5%, (and that makes sense if consumers feel better) and the XLI – Industrials added 1.17%. Healthcare and Consumer Staples remained flat.

this as the macro economic data continues to show that another 3.1 million people filed for unemployment bringing that total to well over 30 million people since this nightmare began.  Today we look forward to the monthly Non-Farm Payroll report – and expectations are for it to show losses of 21 million jobs in the past month – erasing nearly every job gained post the GFC (Great Financial Crisis).  Unemployment – which had been at historic lows for months at 3.5% is expected to surge to 17% – with some estimates calling for the rate to top 24%.  Minneapolis Fed President Neel Khashkari – told NBC’s Today show that

“That bad report tomorrow is actually going to understate how bad the damage has been, the reported unemployment rate could be as high as 17% — a brutal number, no doubt — but the true number may be as high as 24%. It’s devastating.”

Now that being said – and while we all know it to be true – the fact is that the FED is and has acted aggressively – spending nearly $7 trillion to avoid a Great Depression ‘like’ outcome.  Khaskari, like many others still feels that the recovery will be gradual, until we discover a vaccine or therapy that will make everyone feel safe.

Next up – continued dividends cuts or suspensions create uncertainty – so far 85 companies have announced such plans – names like BA, DIS, F make the top 10 while concerns that many more may be forced to consider cutting or suspending their dividends as the damage from the virus spreads continues to cause concern for investors that depend on dividend payments as a source of income.  This situation should correct itself once the world wakes up – but until then this story is sure to gain steam as companies are forced to make hard choices.

Overnight – stocks in Asia rose as tensions between the US and China appear to be calming as Bobby Lighthizer – US trade representative and Liu He – China’s trade representative agree to maintain the ruleset that is the Phase 1 trade deal while lockdowns around the world are easing and demand for oil appears to be improving. The Nikkei rose 2.5%, Hong Kong rose 1.04%, China rose 1% and the ASX gained 0.5%.

In Europe – markets across the continent are also in ‘giddy up’ mode – rising more than 0.5% as the day begins.  Again US/China trade tensions calming down and the easing of restrictions being the focus.  Germany reports that exports plunged 12% in March which was more than expected – yet investors/algos are focusing on the future and not the past.  Markets have already priced in much of the devastation that the reports are now confirming. As of 6 am- FTSE is +1.4%, CAC 40 +0.76%, DAX +0.78%, EUROSTOXX +0.51%, SPAIN +0.17% and ITALY +0.43%.

US futures are surging ahead of today’s NFP report – which is expected to show devastation. But we know this and the market knows this – unless you have been living under a rock – this is not surprise at all. At 8:30 the government will reveal what they think is the number of job losses that we suffered in the past month and it’s a big number. 21 million jobs, manufacturing expected to lose 2.5 million jobs and unemployment to surge to 17%. While those are big numbers – my sense is that those are not nearly close to right…Yeah – they will report numbers in line to those expectations – but my sense is that they are still wrong and we will find out when we get the revisions to this report next month – but by then – it will be old news. At the moment – Dow futures are up 300 pts or 1.2%, S&P’s are up 36 pts or 1.2%, Nasdaq is about to surge by 90 pts or 1% and the Russell is ahead by 16 pts or 1.2%. The market appears to be pricing in a successful re-opening, but that does not mean it will be a return to what the world was before CV19.  History will now be defined by Pre CV19 and Post CV19 – much like BC/AD, or Pre-Great Depression, Post Great Depression, Pre WWI/Post WWI, Pre-Tech Revolution/Post Tech Revolution. Capisce?

Oil is surging again – currently up 3.4% at $24.25 and up 18% for the week as easing of restrictions around the world is seeing demand for oil rise.  Production cuts are beginning to kick in and that is slowing the increases in supply that continue to exist suggesting to some that there is NO danger of running out of oil – (LOL). Remember – the world is awash in oil – no worries. The price of oil nearly kissed the trendline yesterday –coming within $1 – so my sense is – we need to kiss it 2 more times before we manage to get the strength to move up and thru and when we do – say hello to $30 oil…

The S&P closed at 2881 – and if this morning’s rally holds we will open well above 2900 and if the excitement builds then a challenge to the April 29 high of 2954 would not be out of the question…it’s only a 3% move and it’s not like we haven’t seen that.  So, we are still in between the trendlines of 2730/3000 – and if the S&P wants to play with the Nasdaq it needs to bust up and thru what is expected to be significant resistance at 3000. It only took the Nasdaq 2 times to bust up and through long term resistance – but the Nasdaq is a different index- all tech, the S&P is more representative of the economy and includes stocks from every sector – which is what is holding it back just a bit…but that too will change – stay positive. Have a great weekend. 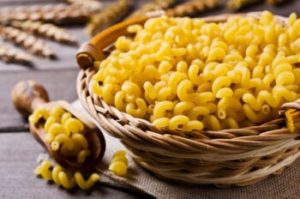 Cavatappi is a kind of macaroni that looks like a spiral tube.  You may know it as tortiglione or spirali.  The word Cavatappi is a combination of Cava & Tappi – whose literal translation means “tap extractor” or corkscrew.  Capisce?

This is a vegetarian dish that is easy and quick to make.

Bring a large pot of salted water to a boil. Add the Cavatappi and cook until aldente – 8 / 10 mins.

In a sauté pan – heat up some olive oil, crushed garlic and a sliced/chopped “red” onion.  Sauté until the onion is soft and translucent.  Now add a can of cannelloni beans – juice and all and stir to heat up…about 4 mins or so. Now add the arugula and stir.  Arugula will wilt – no worries.  Drain the pasta – saving a mugful of the pasta water… return pasta to pot and add back 1/4 cup of the water to re-moisten.  Next add beans and arugula – handful of Parmegiana cheese and toss.  Serve immediately in warmed bowls with freshly toasted garlic bread.