Investors Are Getting Optimistic 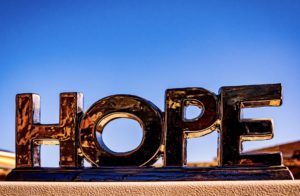 Stocks ended the day and week even higher than it began – worsening macro data seeming to be the fuel that continues to fire the engines of the advance – as some tried to explain it away as “yes, it was bad, but not as bad as we had expected.” so, in an odd way – the algos go all in and buy, buy, buy sending the Dow and its cohorts higher on Friday. By the end of the day the Dow was up by 455 pts or 1.9%, the S&P up by 48 pts or 1.7%, the Nasdaq up by 142 pts or 1.5% and the Russell up 46 pts or 3.64%.  This was just the latest in a round of data to cause the head scratching confusion that so many investors and analysts try to reconcile against the reality of today and with the number of new cases moderating in the US – and talk of new progress towards a potential vaccine/treatment. Investors are beginning to feel more optimistic.

The key driver on Friday was the long awaited Non-Farm payroll report and that was a “doozy” showing the biggest one-month loss (20,500,000) of jobs ever – sending the unemployment rate up from 4.4% to 14.7% – a number I believe is incorrect – not that I have any other information – but just because all you have to do is witness the devastation that the virus and this forced shutdown have down to the country and the longer we remain in isolation mode, the worse this is going to get. So far, 30 states have “turned on the lights or announced plans to do so” while others discuss a plan and this will continue to cause concern as so many expect a resurgence once this begins. Additionally – word that the virus has now infected the west wing” came out on Saturday causing some new unrest just at the time when the President is demanding that the country begin to open its doors.

Now whether or not a resurgence happens is yet to be seen, but it is still a fear and that fear is causing so many mixed reactions. And the news continues to pin every new medical headline to the virus.  Strokes, hoof and mouth disease, heart attacks etc, all being defined by the virus as they seem to be occurring in patients that previously would not be susceptible. Which makes me wonder – could the strokes and heart attacks be because of the stress caused by the isolation and sheltering in place? Could we be experiencing some of these events because our lives have been so disrupted? I mean – we know that research has found that conflicts and stress are linked to an increased risk of heart disease, stroke, higher blood pressure, higher cholesterol, diabetes and increased alcohol, drug  and tobacco use.  I’m just sayin. It has been a bit stressful of late – on all fronts creating conflict at home and conflict across the nation.

But that has done little to slow stocks down – the rebound that began in April doesn’t appear to be running out of steam at all and we can thank the FED and many of the other central banks around the world for that as they have all pledged to “do whatever it takes.” I mean look – in just a matter of weeks – a decade of job gains has vanished, consumer spending has plummeted, businesses have been shuttered, manufacturing activity has imploded, regional FED surveys have shown devastation across the nation while Purchasing Managers Indexes – PMIs fall well into contraction mode. Yet the market continues to push ahead – causing a disconnect between what stocks are saying and what Americans are experiencing. I mean as of Thursday last week – the Nasdaq index went positive on the year – yes still below the February highs – but no longer negative while the S&P, Dow and Russell continue to make up lost ground. All of the indexes moving up nicely off their March 23rd lows.

The next question is: What will the recovery look like? Many think it is going to be that V shape, while others – myself included – are expecting more of a W shape – not that W is bad, but it seems more realistic – because even though some businesses are re-opening and restaurants etc are trying to get back to work – new rules on occupancy rates and social distancing will define how successful it is. Office spaces in major cities is sure to come under fire as the technology has now proven – almost anyone with an office job can work from home or even their camper. Rent expenses, and building services, major transportation systems in big cities are sure to experience a dramatic change (at least in the foreseeable future) all being subject to scrutiny as we envision the world ahead of us.

Still – many analysts are watching for any indication that the bottom is in. From traffic patterns, Starbucks (specifically) online orders, restaurant reservations on Open Table, debit card gas receipts and toll collections across bridges and tunnels around the nation….as they look for clues to a return to normalcy. A Goldman Sachs analyst note says:

“There are some small, early signs that life is resuming some form of normalcy. We expect these small signs of recovery to continue as the country gradually reopens and consumers resume their daily activities.”

Well that’s great, but not sure you have to be a GS analyst to recognize that things will return to some sense of normalcy IF and WHEN you allow people to get back to work.

Overnight – stocks in Asia rose as developments on the virus and talk of more normalcy take center stage.  Disney re-opened its theme park in Shanghai today and demand was strong – although CNBC’s Eunice Yoon – telling us that getting there was anxiety filled as people are only now just allowed to travel from city to city, but that Chinese citizens are also used to being under scrutiny so that much of the demands put on them are nothing new.  On the spot fever readings, health cards, prior locations visited, who you stayed with, how many times do you wash your hands, etc. are all the ‘norm’ for them (but not the norm for the rest of the world). South Korea warning of a potential second wave if the re-opening is not done correctly. The Nikkei rose 1.05%, Hong Kong rose 1.44%, China -0.09% and the ASX gained 1.30%.

In Europe – markets are lower after opening in positive territory. Investors watching all the developments as countries across the zone begin the process of waking up. In the UK – citizens that can’t work from home are being “encouraged” to go back to work if possible but not to use public transportation. Although public transportation is available – they don’t really want you to use it. In France – people no longer need permits to travel and in Italy – stores and restaurants are taking it slowly as PM Giuseppe Conti said over the weekend that Italy would begin to ease more of the lockdown measures imposed to keep the outbreak under control. Germany is just beginning to discuss what’s next.

In the US – futures are lower after being up all night as the new trading week kicked off in Asia. The Dow is – 157 pts, the S&P is off by 19 pts, the Nasdaq lower by 30 pts and the Russell is down 13 pts. This morning – it feels more like the markets are taking a breather as so much of the improved growth is already priced into the markets. Again – remember that the market is trading at what it thinks the future looks like vs. what is happening today. Recall that the sell off happened before we actually got all of the horrendous data, but was trading on the expectation of that horrendous data. Now – it is trying to trade on what it thinks is happening 2 months out and the rally of the past 4 weeks is telling us that it expects the data to improve and improve markedly so this mornings “weakness” is really more of the markets absorbing and digesting the latest surge as it now approaches longer term resistance at S&P 3000.

Key events this week include: CPI, PPI, Retail Sales, Capacity Utilization and Industrial Production.  Earnings are for the most part – complete although there are a few stragglers that will be reporting over the next couple of days – none of which will be a directional driver for the markets at all. The focus will return to the macro outlook and the path of normalization for the global economy.  Tomorrow we will hear from some of the Fed Presidents –St Louis’ Jimmy Bullard, Cleveland’s Loretta Mester, and Philly’s Patty Harker. OPEC will give its monthly production/supply report on Wednesday and Thursday brings us another round of Initial Jobless Claims – exp of 2.5 million more people join the unemployed.  And on Friday – we will hear from China – Industrial Production and Retail Sales – but you need to take anything they say with a pound of salt vs. a grain of salt.

Oil is down 2% after surging more than 20% last week. Today’s anxiety? The supply glut again and a fear of a resurgence in infections that would cause any expected demand to decline. How about – it’s just digesting as well from the recent moves higher Remember oil is up 37% in May alone – so any pullback in the next couple of days would not be a surprise at all and in fact – we should welcome it as oil tested short term resistance last week and as expected backed off. So any pullback will only give it more strength the next time to bust up and through.

The S&P closed at 2929 – after trading as high as 2932 as it tries to challenge the April 29th high of 2954.  We are still in between the trendlines 2730/3000 – and will most likely stay there in the weeks ahead as we watch what the world does to open its doors again. If we begin to open and see a resurgence – then watch as we collapse, if not then we should and will see the markets challenge resistance at 3000. Do not expect it to pierce it on day 1, but if a successful re-opening takes place – then we could see ourselves back on the north side of the trendline and that will be visually very positive for investors psyche. 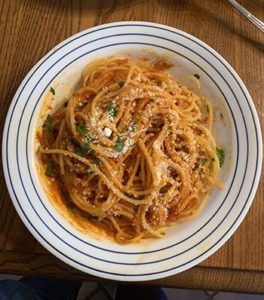 Begin by bringing a pot of salted water to a rolling boil.

Chop some of the parsley and take one clove of the garlic and dice it.  Mix and set aside.

Next – pour quarter cup of olive oil in a large saute pan.  Turn up the heat to med high – when hot – Add in the thinly sliced shallots and 6 of the 7 thinly sliced garlic cloves.  Saute, reduce heat to med and allow to turn a nutty brown – but not burnt.  Stay be the stove.

After 10 mins or so – add in 1 tsp of red pepper flakes, and the 12 anchovy filets – you can cut them in half – but they melt anyway….no worries, you won’ even know they were there.  Add the can of tomato paste and stir it around as it melts into the shallots/garlic.  Season with S&P – add the pasta to the water and cook for about 8 mins..or so….  Before you strain the pasta – take 3 or 4 ladles of the pasta water and add to the tomato mixture – stir well to blend.    Strain the pasta –

Serve the pasta in warmed bowls and top with some of the sauce.  – Toss in your own plate and then add some cheese.  This is not meant to be a ‘sauce’ per se – it is more a coating of the pasta vs. a sauce.  Serve with your favorite Chianti – this does not need an expensive full body red at all.  Keep it simple.