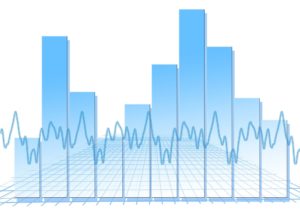 Stocks waffled for most of the day yesterday. The S&P started the day lower, slowly making its way higher – going positive at 12:24 pm and then remaining north of the unchanged line all day ending the day flat (up less than 1 pt) – the Nasdaq – which opened negative – quickly went positive as the need for investors to buy anything “tech” rages on leaving that index up 71 pts. The Dow stayed negative until 1 pm when it briefly went positive – but quickly fell back into negative territory by 2 pm ending the day lower by 110 pts. And the Russell mimicked the Dow – opening negative – going positive at 1 pm, negative again at 2 pm to end the day lower by 8 pts leaving investors to weigh in on rising tensions between the US/China, continued weak macro data and a potential resurgence in virus cases leading to a new round of possible lockdowns as countries around the world begin the process of attempting to reopen.

Germany reports an increase in the “reproduction rate” (which makes you think of pregnancies vs an uptick in virus cases) while Italy, France, Spain, and the UK are all preparing to restart their economies while here in the US, 20 states have already begun while another 10 or 12 toy with the idea. NY – the hardest hit, along with CA, Ohio, FL, TX, etc. all beginning to ‘dip their toes’ in the water as the WH encourages governors to “get going.” The market which last week responded positively to the idea of a re-awakening, is suddenly a bit more cautious as South Korea is the first country to report the biggest one day increase in a month forcing the gov’t to warn of a ‘second wave’ and that is causing investors/traders and algo’s to rethink this whole “rally strong” idea.

The volatility that defined the market since late February when it spiked some 358% is alive and well…and while it has since retreated – falling some 75% – we can expect it to surge once again if that second wave hits. The VIX which closed up 34 cts at 27.89 could easily gap up if Europe or the US suddenly reports such a rise in cases.  But if we succeed in returning to normal – whatever that new normal is – then we will surely see the VIX return to pre-corona levels as investor angst subsides.    The ‘dance’ over the next month or two will be very important as investors assess global macro data, corporate guidance, additional WH mandates and new FED action in what is likely to be one step forward, two steps back and then 3 steps forward 1 step back process. It certainly will not feel like a waltz, nor will it feel like the very defined and targeted steps of a Tango but rather more akin to ‘break dancing’ – where anything goes…

And speaking of the FED – did you see the latest news about the ‘tools in their toolbox’?  NY Fed President Johnny Williams revealed that starting today (Tuesday May 12th) ‘the central banks Secondary Market Corporate Credit Facility (now that’s a mouthful) will be the tool used to buy ETF’s’ the LQD – which is an ETF that is composed mainly of investment grade corporate bonds (and some high yield bonds).  Now to be sure – this product is a bond ETF that trades like a stock….so if it looks like a stock, trades like a stock and is listed on the New York Stock Exchange’s Arca stock platform then it must be a stock – Capisce? I mean it’s just another example of abductive reasoning*?  It’s like saying – If it looks like a duck, swims like a duck and quacks like duck – the it must be a duck…… Making the US FED look more like the BoJ (Bank of Japan) opening the door to the possibility of the FED getting into the equity markets. Just sayin……

(*abductive reasoning is a form of logical inference that starts with an observation or set of observations and then seeks to find the simplest and most likely conclusion from the observations. – Wikipedia)

In another blow to the head – the recent furloughs seen to manufacturing and factory workers which were temporary are now becoming permanent – further eroding a workforce that has been in decline for decades as we moved the manufacturing process to China, Mexico and the South Pacific. And no matter what – when we re-open you can’t make anyone go shopping at a mall or go to dinner in a crowded restaurant-  but apparently they can pack them into airplanes once again.  A passenger on a recent UAL flight from Newark to San Francisco videod a completely full flight – posting on Twitter – 3 seats across full of people- all wearing masks yet touching shoulder to shoulder in what he described as an ‘anxiety filled flight’.  United responded by saying that their planes are clean and that they have ‘new’ rules on how people board the plane and how they de-board the plane – Great!  What about how they sit on the plane during the 6 hr flight across the country? Let’s see how long that lasts if there is a resurgence….

Overnight – stocks in Asia declined. China reported a rise in their CPI of 3.3% y/y, while the producer price index fell by 3.1% y/y vs the expected 2.6% decline.  Concerns of economic decline across the region remain and the latest South Korea news is causing investors to stop and assess the most recent moves up.  The Nikkei fell 0.125%, Hong Kong -1.45%, China -0.0% and the ASX lost 1.07%.

In Europe – markets are bucking the trend no matter that German infection rates are on the rise and fears of a second wave hit the tape.

In the US – futures are mixed with the Dow down 16 pts, the S&P off by 2, the Nasdaq is up 2 and the Russell is up 5 pts.  And while it feels a bit boring right now it is anything but.  We will hear from 3 more FED heads today – Bullard, Mester and Harkins while Dr Fauci will appear today in front of Congress – virtually – to offer a ‘dire warning’ about a pre-mature re-opening and the possibility of a second wave that could hit the US if we don’t take good care.   NY’s Cuomo announcing that certain low risk businesses will begin to re-open on Friday leaving markets torn between optimism and concern as these re-openings begin.  Expect to see the markets focus on the potential negatives first as the run up feels a bit skittish, if we don’t see an increase in cases then expect the markets to become even more confident and surge higher to challenge S&P 3000.

Oil surges by 8% this morning – trading at $25.31/barrel as the Saudi’s pledge even more production cuts in June to help ‘drain the swamp’ I mean ‘drain the glut’ that has put pressure on oil markets.  We are $1 away from piercing the downtrending resistance line at $26.32 – Is today going to be the day that we push up and through after we kissed it 3 times?  If so – then watch for $30 oil.

The S&P closed at 2929 on Friday and closed at 2930 on Monday….as it waits patiently for the next set of data points that will determine the direction.  We are still in between the trendlines….2730/3000 – and will most likely stay there in the weeks ahead as we watch what the world does to open its doors again.  If we begin to open and see a resurgence – then watch as we collapse, if not then we should and will see the markets challenge resistance at 3000. 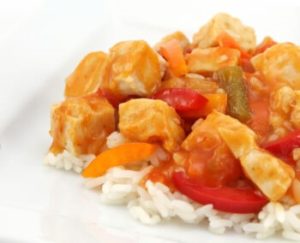 This is not a difficult dish to make and once you simmer it – treat yourself to a bubble bath then come down and set the table, break open the wine, turn on some dinner music and enjoy the night.

Season the chicken pieces with s&p – set aside.  In a heavy frying pan – heat up some olive oil,  – now brown the chicken on all sides.  Remove and place on a platter.

Now add the garlic, carrots, celery, and onion – sauté for 10 mins on med heat….Now add the sugar, wine, vinegar, orange juice, and almonds….bring to a boil  – add back the chicken – skin side up.  Place a lid off center and turn heat to simmer.  Cook for about 30 mins.

Now remove chicken and place on a platter, – turn heat up to high and stir until it is nice and thick…not long…maybe like 4 mins max…..taste – adjust seasoning with s&p.  Spoon the sauce over the chicken pieces and serve.

This dish works well with a green veggie – like French cut green beans or broccoli.  Make a large mixed green salad with tomatoes, red onion and cucumbers.  Dress in a balsamic Vinegar and Olive oil dressing.  Keep it simple – as the chicken and marinade carry the dish.