Stocks did end up bucking the early trend on Friday morning… as they all opened lower, struggled to find ground, and then slowly fought their way back by mid-afternoon as investors/traders and algo’s processed and digested the news. The weakness started with the usual suspects – concerns over increasing tensions between the US and China after the administration moved to block shipments of semiconductors to Huawei, concerns over a resurgence in infections upon re-opening, whether or not we are close to a vaccine or treatment and the continued surge in unemployment and job losses – some that are now more than likely not to return amid the worsening macro-economic data – all painting a bleak picture.

Retail Sales m/m, Retail Sales less Auto’s and Gas, Empire State Manufacturing, Capacity Utilization and Industrial Production all plunging to levels not seen in our lifetimes, Unemployment harking back to the days of the Great Depression reminding some that history does in fact repeat itself.

Then the selling abated a bit as the markets found some support – now this was not trend-line support but it was support within the range of the week – as the algo’s pushed to test the lower range,  the buyers weren’t having it – because in the end – all of those concerns were not new at all….investors, traders and algo’s have been expecting this, this has been the conversation – there was really nothing new – so the bulls felt confident to take a stand causing the algo’s to back off a bit to see what the buyers would do…..Would they begin to ‘take stock’ which suggests bullishness as buyers ‘reach’ for supply or not?

So once the selling goes into passive mode – the ball gets tossed into the other court – in this case – it’s the buyers turn to set the pace.  If the buyers do nothing then there is a ‘Mexican standoff’ and the market stalls, and if the buyers back off – then the sell side algos ramp it up again forcing the market lower, but if the sellers back off and then the buyers begin to ‘reach for stock’ that suggests that the market has found a level of equilibrium and its off the races… Which is exactly what we saw on Friday afternoon. Once the sell side algo’s took the pressure off – the buy-side algo’s got more aggressive and began to go shopping and by the end of the day all the indexes moved from negative to positive with the Dow adding 60 pts or 0.25%, the S&P jumped 11 pts or 0.39%, the Nasdaq adding 70 pts or 0.8% and the Russell surging by 19 pts or 1.57%.

There was one piece of macro sentiment that did paint a picture of hope…Consumer sentiment, which has been beaten up lately, unexpectedly rose to 73.7 in the 3 weeks ended May 13th… vs. the 71.8 reading in the prior previous 4 weeks and that is interesting considering that consumer spending and retail sales are plunging – so what does it say about the consumer psyche? Are consumers suggesting that they think the worst if over?  Is there light at the end of the tunnel?  Well that appears to be the song they are singing this morning… As markets around the world are all in ‘Risk On’ mode…

Asian markets closed higher; European markets are surging all up more than 2% while US futures are celebrating the good news…currently up better than 1% in the early pre-dawn hours…

Over the weekend – the sun was shining and people came out of their homes – many along the east coast flocking to the beaches and the parks… NYer’s – who tend to be more liberal and were the most affected – shunning the rules and shunning their masks enjoying their freedom along the beaches of Long Island and the Jersey shore… infections are down, excitement is building and the people are ready to get back to life as we knew it. States are opening, although at different rates, but they are re-opening and while masks and caution are still the name of the game – the sense is that the worst is behind us –  and then…

Last evening – Fed Chair Jay Powell appeared on 60 minutes and gave his view of what’s next – and negative rates are NOT in the cards at all. In fact he said that he is ‘highly confident’ that the US will recover, qualifying it by saying that it may not happen until there is a vaccine while also telling us that he does not believe that we are headed for another Great Depression like the one seen during the last century despite the fact that unemployment is expected to approach 25% up from what was 3.5%.

In it he said: “I don’t think that’s the likely outcome at all.  We had a very healthy economy two months ago. Our financial system is strong.  You have governments around the world and central banks around the world responding with great force very quickly and staying at it and in the long run you don’t want to bet against the US economy.”

So, while it is going to be very sharp, it is also expected to be short – let’s hope he’s right.

As I said – Asian markets ended the day slightly higher as Japan announced that their economy shrank by 3.4% in the 1Q – marking the second straight quarter of contraction – meaning that they too are in a recession joining Germany which announced last week that their economy has entered a ‘technical recession.’  Is the US next? The decline though was NOT as bad as expected – so buyers saw an opportunity and went on a shopping spree.  Japan +0.48%, Hong Kong +0.58%, China +0.26% and the ASX +1.03%.

This morning – European markets are on a tear… as countries continue to re-open – although not at the pace that some would prefer…unrest in Germany over the weekend accentuating the discontent among its citizens and this is also being seen around the world… and the fear is that this discontent is building – so it is a fine line that we are walking as governments around the world figure it out.  In early morning trading- we have the FTSE +2%, CAC 40 + 1.98%, DAX + 2.65%, EUROSTOXX +2%, SPAIN +1.6% and ITALY +1.26%.

US futures are surging with the Dow up 448 pts or 1.9%, S&P up 52 pts or 1.8%, the Nasdaq +139 pts or 1.5% and the Russell is up 50 pts or 4%. Word this morning that states that have re-opened are experiencing better results and no significant resurgence, reports that restaurants are opening and seating people – yes at a distance and yes at 50% of capacity, are coming in at a brisk pace and so are the patrons. Restaurant workers are required to wear a mask in most states while patrons in some states are not… but that did not ruin the mood at all. Also news that the Saudi’s are going ‘all in’ on America is helping the mood… SEC filings reveal that the Saudi Investment Fund – a $320 billion sovereign wealth fund – bought large stakes ($500 million each)  in BA, C, BAC, FB, DIS, CSCO and MAR during the latest quarter – suggesting that they too think the worst is over and that the opportunity created by the recent pullback was too good to pass up… no matter what Warren (Buffet), Stanley (Druckenmiller) or David (Tepper) have to say…

And speaking of Warren – Over the weekend we learned that he has sold nearly 84% of his Goldman position – a position created during the Great Financial Crisis when Goldy was on the brink – forcing then Chairman Uncle Lloyd Blankfein to go and beg for a cash infusion – offering Warren very favorable terms in return for $5 billion dollars (which represented a 10% stake)… At the time it was a life vest for Goldman as the financial markets were coming unglued… while being a decent long-term investment for Berkshire Hathaway. Someone should check the records of GS senior management – how many of them sold stock when they found out that Warren was liquidating his position?  Just asking – just curious…

Oil – would you look at that!  What happened? On Thursday – WTI (West Texas Intermediate) pierced its short term (down trending) trend line… an event that I kept telling you was sure to happen and it happened at the level I have been suggesting… ~$25/barrel. On Thursday we broke up and decisively thru that trendline going even higher on Friday and even higher today – taking us thru the $30 mark – up more than 8.5% or $2.32 at $31.75/barrel. This now puts WTI solidly between trendlines… support now at $25 while resistance is at $39/barrel – A level I have been saying is most likely where it should be… Now – when the world reopens and demand for oil surges -far outstripping current supply – then we can expect oil to surge higher and challenge that resistance… I say outstrip supply, because producers around the world have slashed production – US included – but that is more a pricing issue for us while it is a choice by OPEC+ , once oil approaches $40/barrel – expect global producers to come back on line… relieving some of the supply constraints that will surely be the next talked about topic…

The S&P closed at 2863 after having tested as low as 2816 – for now it looks like we escaped testing support at 2720… a level that I have identified over and over as a possibility – but look the game is not over yet. The market is just waiting to see how this unfolds… and while Friday and today suggests a turnaround in the tone – I think it is temporary and I still think that a test of the technical support level is in the cards – for no other reason than to confirm investor commitment.

We are still in between the trendlines….2720/3000 – and will most likely stay there until we see what happens next…. As of this morning it does NOT appear that we are seeing any significant uptick in new infections….and if that is the story then watch as the markets surge and challenge resistance at 3000. 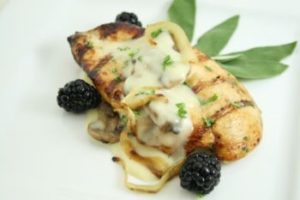 Apparently it is a time to celebrate….so break out the champagne……This is a classic dish, easy to prepare, presents beautifully on the plate on a bed of sautéed spinach will leave your guests wondering – How you did it.

Start with skinless pounded chicken breasts – dredge in seasoned flour – (S&P). After you have dusted all the breasts – set aside.

Next add 3/4 cup of heavy cream (or lite cream if you must), chopped Italian parsley and a bit of rosemary powder and continue cooking until it thickens up.

While this is cooking – sauté some fresh spinach in garlic and oil and then make a bed on each plate.  When the chicken is done – transfer the breasts to individual plates and top with the champagne cream sauce.

A nice mixed green salad garnished with cherry tomatoes, red onion & cucumber dressed with a champagne vinaigrette finishes off this meal.  Choose a lighter bodied red or even a chilled white to complete the presentation.