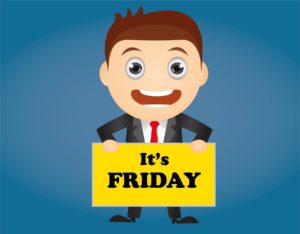 It was a dramatic day yesterday – with some big investors going negative on the markets and Fed Chair Jay Powell expressing some concern, Asian markets reporting an increase in South Korea and China, European markets were weak as economic data continues to take a toll and concerns over a resurgence are on the rise just because we are about to try and wake up and no one really knows what’s next. Then in this country – Initial Jobless Claims surged more than expected and the Harvard grads at Goldman took their outlook from Cloudy to Gloomy… saying that as more people lose their jobs, more people will be classified as ‘unemployed’ (stunning revelation).

Questions surrounding a return to normal are no longer being asked because first we have to define what normal will be. Once we do that -then it will be easier to understand what’s next. Investors/traders and algos on the edge as the tone had turned decidedly negative. Stocks opened sharply lower taking the S&P down 58 pts or 2%, while the Dow lost 448 pts and the Nasdaq gave up 158 pts all before 9:50 am… as investors prepared for what felt like a coming earthquake… bullish talk of piercing trend-line resistance levels suddenly turned to talk of testing trend-line support levels – especially when nearly every guest on TV was talking about how ‘overvalued’ the market was… What? How could it be so overvalued from last week to this week?  Well – that’s a great question and it has a couple of answers:

Essentially, we had plethora of negative headlines, negative headlines that built upon each other as Monday turned to Tuesday turned to Wednesday, etc. — and the pullback that so many of us have been talking about well before these headlines hit the tape became true but it all turned suddenly – No one said anything, there wasn’t anything specific, there was no ‘moment’ but there WAS a technical reason…as the indexes found some support and boom – just like that the algo’s went from sell mode to buy mode and by the end of the day – the Dow surged off the lows adding 826 pts to end the day up 377 pts, the S&P added 86 pts off the lows to end the day up 34 pts and the Nasdaq went from -158 pts to + 80 pts or a 238 pt. surge from low to high.

It’s all about the Technicals…

Now as I have been saying all along – I expected the markets to challenge and hit resistance and fail at the long term trend-line – S&P 3000 (we came within 46 pts) after it successfully pierced what was the short term resistance (and became short term support)  line back on April 23rd… days after the Nasdaq blazed that trail – piercing its short term trend-line on April 14th and then its long term trend-lines on April 27th – setting the stage for what some investors thought was a reason to celebrate (because the news hadn’t changed)… and then they started to throw cold water on it – and boom – not happening, and the market sells off.

Now while the talk turned more bearish – the technicals DO play a role – because the long term trend-line is a technical indicator and after the swift selloff we experienced in March many of those technical indicators got smashed as the market collapsed – leaving a fair amount of internal damage to the ‘technicals’ of the market that do need time to recover – and we are recovering, but like a sick patient,  there can be setbacks along the way, setbacks that are more temporary than permanent as we make our way back.  I mean even Sheryl Crow told us that “No one said it would be easy, but no one said it would be this hard.”

Overnight – stocks in Asia ended the week mixed… China reported that industrial production rose by 3.9% (better), while retail sales fell by 7.5% (worse) and that’s if you really believe the data they report.  What has become blatantly obvious during this whole crisis is how dependent the world is on China’s recovery…. and that should be a conversation that the world has starting today… Japan +0.62%, Hong Kong – 0.14%, China – 0.32% and ASX +1.43%.

In Europe – markets are on the rise… word that the ‘transmission rate’ in Germany is below the ‘key threshold’ is helping the tone as the easing of the lockdown begins… Eurozone GDP is due out later this morning, while France is arguing that the whole world should have equal access to any potential vaccine – after the CEO of French Pharma giant Sanofi said that the US would ‘most likely be prioritized’ if and when a vaccine become available.  Germany plunges into recession as 1Q GDP fell 2.2%. As of 6:45 am the FTSE is +1.16%, CAC 40 +0.96%, DAX +1.86%, EUROSTOXX +1.16%, SPAIN -0.06% and ITALY +0.85%.

US futures were higher in the early morning hours but have since turned negative. Currently Dow futures are -65 pts, the S&P’s are off by 10 pts, the Nasdaq is down by 12 pts and the Russell is off by 3 pts.

It is Friday – and the weekend is just 8 hours away – and with the expected weak economic data today there is not a lot of reasons to think that the market should rally hard at all. Stories that companies like Clear (you know – that scanning company located at the large int’l airports)  – are moving towards integrating peoples identity with their health records, travel records, family records, phone records etc. at nearly every place we go….office, school, stores, planes, trains and automobiles….just a reminder that we are becoming China – because that is what they do to monitor and control Chinese citizens.  See this morning’s clip from CNBC Squawk Box when Becky Quick spoke to Eunice Yoon

Understand that they are watching every move that anyone in China makes and they are issuing barcodes so that they can confirm what you say is true as to where you’ve been, who you’ve been with and at what times you came and went and attach all of that plus your health records to the central gov’t agency creating a database of ‘big data’ that is beyond enormous. Is this what’s next for America? Well guess what – it’s already here… your smart phone has already been collecting most of the data – with just a few tweaks it will collect it all and since most of these phones are manufactured in China – guess who else is collecting the data?

The S&P closed at 2852 after having tested as low as 2766… on its way to test support at 2720… a level that I have identified over and over as a possibility. Look – the market is just waiting to see how this unfolds… and while yesterday saw a turnaround in the tone – I think it is temporary and I do think that a test of the technical support level is in the cards… I do not see a collapse at all.

We are still in between the trendlines… 2730/3000 – and will most likely stay there until we see what happens next… And again, if we begin to open and see a resurgence – then watch as we collapse, if not then we should and will see the sun shine and the markets surge and challenge resistance at 3000. 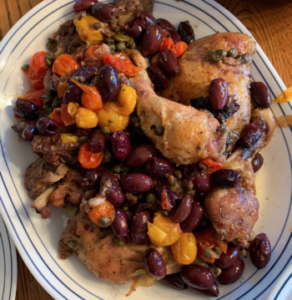 This is a simple and delicious recipe…. easy to prepare and even easier to cook.  Works well for a family dinner or for a dinner party.

For this you need:  thighs (skin on), Kalamata Olives, capers (rinsed), cherry tomatoes, S&P, olive oil, and a dash of dried oregano.

Preheat your oven to 425 degrees.

Season the chicken thighs with S&P.  Next add a dash of oregano and then splash some olive oil – just enough to coat the thighs.  Massage the olive oil and the seasonings on each thigh and place in the roasting pan.  Do not add anything else.

With the back of a large spoon – crush some of the tomatoes while leaving others whole.
When finished – serve on a nice platter – using the tomatoes, olives and capers as the topping and present with a mixed green salad and a veggie of your choice.  roasted butternut squash goes well with this.  If you are still serving this thru Sept 21 – then a nice chilled rose complements this dish, after Sept 21 -then a light red does the trick.

I made this last night – see the picture… served it with roasted potatoes and peas and a large mixed green salad.