Futures are on Fire! Try the New Take on Shrimp Parmegiana 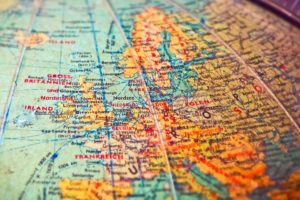 Markets did NOT focus on the continued weak macro data or the crackdown in Hong Kong as China looks to impose new national security laws on this ‘independent, special administrative region’ controlled by Beijing – raising fears that the protests and unrest we witnessed last year for nearly 8 months would re-ignite.  But the markets DID focus on the falling rates of infections and the possibility of a vaccine all while the world re-awakens boosting hopes that a global economic recovery is on the way.  Asset managers all across the country finding value in stocks as the crisis calms.  Now this is not to say that there won’t be bumps or potholes in the road ahead, but the sense is that the US economy is resilient and unlike China – we still have a 2020 GDP growth target – as ugly as it may look – we have it…..and the market is expecting it – so hold on  tight – no one said it would be easy.

Yesterday was a holiday here in the states – so all markets were closed as we celebrated Memorial Day – giving thanks to every veteran for their service recognizing them for their unselfish bravery, dedication and commitment to the US – so that we remain the ‘land of the free because of the brave’.   But that did not stop global markets from advancing on Monday – as the focus remains on what the future looks like as we wake up.   And the advance continues again overnight with Asian markets up strongly – Japan – the world’s third largest economy – added 2.55% as their gov’t finished ending the nationwide shutdown created by the coronavirus,  Australia added 2.9% as the good mood creates a Risk On tone as investors there focus on a possible vaccine and strong recovery.  China advances 1.13%  and Hong Kong adds 1.8% even as tensions between Hong Kong and China remain elevated.  Investors also ignoring the increased tensions between the US & China – as the administration added 33 more Chinese companies to the trade ‘blacklist’ and while Beijing did condemn the US – they did not offer any retaliatory measure (yet).

European markets join Asian markets as investors hit the BUY button as it is clearly Risk On…..reasons are the same….the UK announces plans to get going, German eco data is weak, but better than expected and rates of infections are falling as investors there focus on another possible vaccine being created and tested by US bio-tech firm Novavax (NVAX) which is up 22% in pre-market trading as the excitement heats up.  But recall – we have seen this happen with Regeneron, Moderna then Inovio and now Novavax….they announce results (something that Novavax has NOT done) – everyone gets excited, the algo’s go into a frenzy and the markets go higher – and then after each one announces results from their trials – someone – from the medical community – always comes out on day 2 and disputes the findings as being not broad enough or not indicative enough, or not ‘something enough’ to be considered realistic and the excitement fades….again – follow the money – as there is lots of it to be made in the quest for a vaccine.  As of 6 am – the FTSE is +1.58%, CAC 40+1.46%, DAX +-0.75%, EUROSTOXX +0.90%, SPAIN +1.45% and ITALY +1.36%.

US futures are SURGING in a game of ‘catch up’…..Dow futures are pointing up 500 pts or 2.12%,  S&P’s are up 57 pts or 1.93%, the Nasdaq is adding 180 pts or 1.8% and the Russell is ahead by 38 pts or 2.83%.   News that Novavex has begun human trials in Australia is exciting the markets – but results are not expected until July – so the only news is that the phase 1 trial has begun – Period.  The market is acting like they have discovered a vaccine – and they have not yet.  But the market is reacting to the lack of any significant resurgence in cases both at home and abroad.  Yes, there are some states that are suddenly reporting a slight rise in cases, but not a rise in deaths – and part of this is the availability of more testing – as more people get tested then we can expect more cases to be diagnosed but let’s be clear –  that does NOT translate one for one into deaths.

Next up is the fact that summer is now within sight and the sun is out, the water is warming up and people WANT to return to some sense of normalcy.  Reports suggest that Americans are booking travel, hotels are reporting an uptick in bookings and car sales are surging. Truckstop.com – which measures trucking demand – has shown 4 straight weeks of improvement and even Open Table is reporting an uptick in restaurant reservations and all of this is good for the psyche…..as some investors now believe that we are past the worst of it and the turn in data is encouraging – remain positive.

Oil which WAS down 6% on Friday due to the China syndrome – No China GDP forecast and Hong Kong issues, all giving reasons to take some money off the table after oil’s recent surge up and thru $30/barrel.  The talking heads told us that demand would plunge once again after that news came out and I laughed….as did most of you.  NOTE: demand will not fall – the world is waking up and demand will surge….and this morning – oil is up 2.8% at $34.05.  Why?  Because the reasons for the selloff on Friday were ridiculous……there is growing confidence that as the world reopens, demand will surge, production cuts made by OPEC, Russia, the US etc.. All playing a role in bringing the supply/demand equation back into balance – Remember – summer is upon us and oil demand typically surges and the news that travel and hotel bookings are up suggests that demand is not plummeting at all…..….OPEC is meeting again in June and they are expected to maintain their production cuts to control supply and control the price – I suspect oil will find resistance at $39 as expected but then it will push up and through to find  equilibrium in the $39/$45 range at the height of summer.

The S&P closed at 2955 and if futures hold onto their pre-market gains – then look for the S&P to kiss 3000 at about 9:31…. Now look – this should not be a surprise at all – we’ve been talking about this for weeks now as the markets advanced…testing higher 4 or 5 times in the past month as investors prepare to take it up to the century mark.  The question will be – will be break up and through or will we get hit with plenty of resistance?  The vaccine news is creating lots of excitement and then at 7 am we heard more good news – this time from Merck as they too are now in the race – developing a pill plus two vaccines……all very exciting……  My guess is that we will hit resistance bust up and through and then back off – as both the intermediate and the long term trendlines converge….but let’s see….. 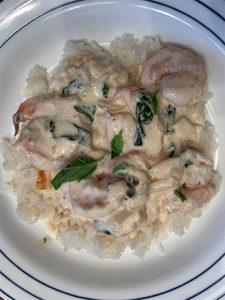 A new twist on Shrimp Parmegiana

So, like so many people stuck in quarantine – many of us are trying out new and exciting recipes….Last night – we tried a new take on Shrimp ‘Parmegiana’ – but this is nothing like what you imagine – there are no tomatoes and no melted mozzarella – this is all about creating a creamy parmigiana sauce, accented by white wine – served over a bed of rice – (you could also serve it over pasta).

Season the shrimp with s&p – set aside.

In a large sauté pan – melt the butter – 3 tbsps., turn the heat to high and then sear the shrimps on both sides for no more than 2 mins/side.  Remove and set aside.

Next add a bit more butter, the onions, garlic, roasted peppers, red pepper, s&p – sauté for 5 – 7 mins.. to give the onions a chance to soften- now add the wine to deglaze the pan – bring to a boil and then turn heat to simmer until reduced by half.

Add the cream – stir –  now add in 1 c of grated parmigiana – stir again to incorporate and then add in the basil.  Now add back the shrimps – and allow all the flavors to blend – maybe 3 mins….

We served this over a bed of white rice – was delicious.  You could also serve over pasta – I would use penne or mostaciolli.