Stocks began the week in the plus column – latching onto every piece of positive news out while seemingly ignoring anything that would detract – Yes – US/China relations have never been worse as Trump considers new sanctions and adds more companies to the blacklist while China/Hong Kong relations are teetering on the edge as China gets ready to impose new security laws on that city – and the virus that has washed over every continent on the planet causing disruptions that no one could ever have believed or imagined, millions of Americans out of work, never mind the millions of Europeans, Canadians, Asians, Australians, Russians and now South Americans and South Africans as the virus moves to the southern hemisphere as summer turns to fall and fall turns to winter – giving new life to a virus that has unleashed devastation and disruption to the global community.

Yesterday began with news of another US bio-tech (Novavax)  that is just beginning a phase 1 trial for what could be a vaccine for corona….now look what I said – they are just beginning a trial – a trial that is being conducted in Australia and whose results won’t be known until sometime in July….at the moment there is nothing to report – zero – yet even the talk of another potential new trial for a vaccine is enough to light global markets on fire – then as the sun rose over the Atlantic – Merck comes out with an announcement of their own – a pill and a two part vaccine series that they are also in the process of developing/testing…again no news to report yet, but just another company in what appears to be a long list of companies vying for position…..a position that will crown – whoever succeeds – the KING……awarding them with not only global recognition but with truckloads and boatloads of money in the process…..And to add to the good mood and the risk on tone – ………news that countries that have begun the process of re-opening are NOT showing signs (yet) of any significant resurgence in infections and this is – in my opinion – the real driving force behind yesterday’s surge.

As 9:30 am approached – European markets were on a tear, the UK, Germany, France, Italy, Spain all turning on the lights sending those markets higher and setting US futures ablaze – indicating a surge of 2% before the opening bell stopped ringing……algos chomping at the bit, investors excited about all of the news – sending the markets into a frenzy….Talk of S&P 3000 – a topic you and I have been discussing for weeks now – becoming a reality….and while I suspected that 3000 would present significant resistance – you would never have guessed that yesterday – the simple ‘kiss’ I have alluded to turned into much more as the S&P smashed thru the intermediate and long term trendlines – trading as high as 3021 by 9:31 am!  In a show of support – the Dow, Nasdaq and Russell joining in to set the markets on fire.  Optimism around a vaccine, optimism around improving macro data, optimism around re-opening the world, increasing bookings in the airline, travel, hotel and restaurant industries sending the message that Americans are ready to return to life as we knew it…. all creating a reason to BUY stocks.  And don’t be fooled – it is also the end of the month – time for portfolio managers to ‘dress up their portfolios’ and with all of this good news – you can be sure that they will want to report positions in stocks that have performed well and will perform well in an improving economy. By the end of the day – the Dow added 529 pts or 2.17% , the S&P closed up 37 pts or 1.23% (closing below the 3000 mark), the Nasdaq lagging significantly – only adding 15 pts or 0.17% while the Russell was the outperformer again (see my notes from last week) adding 37 pts or 2.77%!  Now you ask – Why didn’t the Nasdaq do better?  It has already done better, it is already positive on the year and is now up 4% ytd – while the S&P, Dow and Russel remain -7%, -11% and – 14% ytd….the Nasdaq reacted weeks ago – to what it perceived as better days ahead – but beware – if the news should turn unexpectedly – then you can expect tech will be the first one to fall out of bed as asset managers/investors and traders use the recent gains as a source of cash to be re-allocated to those more ‘defensive’ names….but that’s another story…..

In a show along partisan lines – Republican states are pushing the envelope, attempting to get their economies back on track while Democratic states are being more cautious….as they remain concerned that it is too early to re-open, there is too much risk in allowing people and businesses to get back to work, fearful that the second wave (if there is one) will force another shutdown that could result in even more economic damage to the US economy.

But the markets disagree with the Democrats – and suggest that the worst is over and that it is time to move….Financials (XLF) soaring more than 5% as a group as they stand to benefit the most if we get back to work – Jamie Dimon – JPM CEO telling the world that his stock is a ‘screaming buy’ at these levels – well I said ‘screaming buy’ he said ‘very valuable’  – but you get the picture right – and this sent his ‘very valuable’ stock up 7% making it even ‘more valuable’ by the time the bell rang at 4 pm.  (And this morning JPM is up another 3% in early trading – making it even MORE valuable)  Industrials (XLI) +4%, Real Estate (IYR) +3.6% Energy (XLE) +2.7% and Basic Materials (IYM) +2.5% – all playing supporting roles in yesterday’s advance.   Tech (XLK) and Healthcare (XLV) were the two sectors that showed any weakness  – falling 0.1% and 0.18% respectively and that makes sense since both sectors are up nearly 40% off the March lows.

This morning we are waking up to news that riot police began shooting rubber bullets at protestors in Hong Kong as the pressure builds….besides protesting the recent moves by China – remember that ‘social distancing’ rules remain in place – so police began arresting citizens for ‘gathering’ in groups of more than 10 people – only angering the mob more…..Sounds of the “Star Spangled Banner” drowning out the sounds of The “March of the Volunteers” – (Chinese national anthem) as the crowds fought off the police.  (March of the Volunteers – how appropriate.)  So after the recent moves up – investors in Asia remained a bit cautious – and by the end of the day – Japan +0.7%, Hong Kong -0.36%, China -0.7% and ASX – 0.09%.

Europeans markets are bucking the trend….all moving higher as investors there consider the pluses and minuses of re-opening & re-infections, vs. rising tensions between the US/China and China/Hong Kong.  The EC (European Commission) unveiling a new stimulus program to help the European economy recover and later today and France is set to report consumer confidence for May.  As of 6:15 am – the FTSE is +1.45%, CAC 40+1.76%, DAX +1.755%, EUROSTOXX +1.70%, SPAIN +2.03% and ITALY +1.36%.

Travel and leisure stocks, Financials, Industrials and Energy once again expected to head higher as the action suggests that investors are willing to look past everything that is negative – write off all of 2020 and instead focus on 2021….what will that look like compared to 2020?  Answer:  It has to look better!  I mean are you kidding me?  But slow down and be patient – for the next two weeks…..because this time frame will define the next move…..because as the world wakes up – it will take 14 days before anyone shows any signs of re-infection or the world shows any signs of a resurgence….so we will have a much better idea as we approach June 8thth????  Maybe the 10th?  Now – if you think the second wave is coming – then you should be taking advantage of this move up – because stocks will surely go lower if that is the case, but if you believe what the market is telling you – then you should stick to your plan, continue to invest your money, design an appropriate portfolio for your age/risk category and then sit back….talk to your advisor and stick to the plan.

Eco data today includes the Richmond Fed survey exp of -40 – which is ugly but is an improvement over last month.  At 2 pm we will also get the Fed’s Beige Book – a reading of economic conditions around the country – defined by the 12 regional Federal Reserve Banks.  Tomorrow will bring us the 1st revision to 1qtr GDP and the expectation remains at -4.8% – no surprise there.

Oil is off small this morning as it digests the recent surge higher…..As we begin to wake up  demand will surge and prices will rise because the supply glut that we were concerned about will surely dissipate, production cuts made by OPEC, Russia, the US etc..  all contributing to stronger oil prices.  Remember – summer is upon us and oil demand typically surges.  OPEC is meeting again in June and they are expected to maintain their production cuts to control supply and control the price – We remain in the $30/$39 range for now and as we move higher I suspect oil will find resistance at $39 but then it will push up and through to find  equilibrium in the $39/$45 range at the height of summer.

The S&P closed at 2991 – after having traded as high as 3021…..and this is a bit interesting because the resistance that I have been talking about is 3000…..so the idea that we broke up and through and then closed below that level speaks volumes about technical market action.  3000 is a century mark, it is where the trendlines converge – and while the news yesterday was exciting it was NOT definitive.  This morning the markets are once again focusing on the idea of a vaccine, the idea of no resurgence, the idea of a swift recovery and to confirm that – this morning Mortgage apps showed an ‘unexpectedly’ strong turnaround suggesting that homebuyers are not concerned at all…..why would they – when they can get 2.75% money locked in for 30 yrs?  Are you kidding me?  My first mortgage back in 1984 was 16% – 16%!!!!  It’s crazy to think about it….but it is what it is…..So stay tuned. 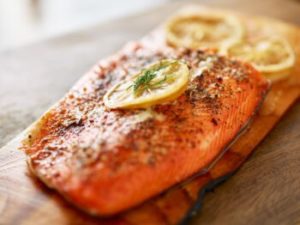 Salmon in a Lemon Dill Sauce

Here is a great Salmon Filet dish.  It is easy to make, and you can eat it either right out of the oven or serve it room temp at a Sunday brunch –

Start by seasoning the filet with s&p.  Set aside.

In a bowl combine the mayo, mustard, lemon, horseradish, garlic, salt and pepper to taste and dill.  Spread the dill/mayo sauce on the flesh side of the fish.  Bake skin side down in a 350 oven for around 15 minutes or so –  or until it reaches your desired wellness.