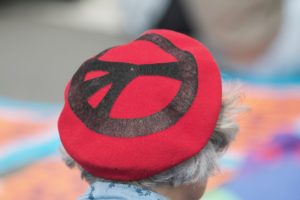 Stocks discounted any of the negative news that rocked the US over the past 5 days as investors focused on the broader macro data sending 10 of the 11 S&P sectors higher…..Focus on a vaccine treatment, US/China tensions, and plans to re-open the economy overshadowed the chaos and anger on display across the country over the weekend.  Economic data reported yesterday included PMI’s (Purchasing Managers Index’s) with PMI’s in China coming in at better then 50 – suggesting a return to expansion in that country….while PMI’s in the US remain in contractionary territory – yet are improving – so investors chose to focus on the longer  implications of what that means while hoping that when we hear from Europe their activity will show the same results suggesting that maybe the worst is over. So while stocks began the day mixed – in the end they finished higher with the Dow +90 pts or 0.36%, the S&P rising 11 pts or 0.38%, the Nasdaq ahead by 62 pts or 0.66% and the Russell tacking on 11 pts or 0.81%.

Healthcare being hit with negative news on Pfizer and Gilead – both on news of disappointing drug studies – Pfizer for a breast cancer drug and Gilead for a corona virus drug treatment – not a vaccine – but a treatment plan.  These headlines caused a bit of a pullback across the sector – the Bio-tech ETF (XBI)  initially falling on the news – but ending the day +0.5% as investors decided that the news was more company specific vs. industry specific….so other names in the covid race that include Moderna & Inovio ended the day higher.

Retailing (XRT)  names also started the day weak as news of more store closing around some of the major cities due to the weekend chaos weighed on that sector – but as the day wore on – investors discounted that news as an ‘short term event’ and not a ‘long term event’ helping to push that sector into the plus column.

But in the end – the focus should and does remain on ‘the hopefully’ declining reports on new corona virus infections as the world awakens, improving macro data points – although it is clear that those improving data points can’t happen fast enough and on the simmering tensions between China and everyone else….and while the news would have you think it is only between the US and China – the truth is that China is Europe’s second biggest trading partner – just behind the US – so tensions with China concern the Europeans as well – but they just don’t air their dirty laundry in public.

Overnight – stocks around the world continue to move higher….Asian stocks jumping on the corona virus band wagon – as it appears that the global health crisis is largely under control and this is helping the mood.  The RBA (Reserve Bank of Australia) came out and announced that they are maintaining the current policy which is very stimulative and that was expected – noting that with a decline of infections  – countries are beginning to ease up on lock-downs and they for one – want to see what happens next before they decide if even more stimulus needs to be added.  News that China is pulling back on US soybean and pork purchases is not creating any significant negative reaction… this action a direct result of Trumps threat to begin to eliminate Hong Kong’s ‘special status’ after China’s move to approve a new national security bill that effectively gives Beijing control – violating the 1997 peace accord between the UK and China when the UK handed Hong Kong over to Chinese rule. This story is just beginning to unfold – depending on what happens next will determine how the US and possibly the UK react and what that will mean for global trade. By the end of the day  Japanese stocks added 1.19%, Hong Kong stocks rose 1.1% (on top of the 3.3% yesterday), China +0.3% and the ASX up 0.27%.

European markets are higher as well – once again focused on the re-opening.  Unrest in the US not affecting investor psyche and at the moment neither is US/China trade tensions.  German markets are up big – currently +3% after having been closed yesterday for a holiday and as news hits the tape that Chancellor Angie Merkel is brokering a second stimulus package to help the German economy rebound from their shutdown.   At 6 am the FTSE is +0.72%, CAC 40 +1.94%, DAX +3.5%, EUROSTOXX +2.36%, SPAIN +2.23% and ITALY +1.96%.

US futures which took a hit overnight after Trump threatened to send in the ‘army’ to control US cities if their own governors can’t get it done have since discounted that headline and are once again focused on the re-awakening of the US economy.  With little to no significant increases yet in new infections – hopes are running high that the worst is over.  But the recent chaos and the crowds they drew are raising some concerns that we will see an increase in the next two weeks in those cities that saw the protests – but in fact – even that is being discounted as governors and mayors work hard to make this happen.

There is no eco data today – so expect the conversations to be about the recovery and the cleanup.  The sense is that the economy will surely recover, but what will it look like next year, the next two years etc?  And while we may see an initial short-term increase in economic activity – will we see a turn in consumer sentiment resulting in a lower level of activity as the new normal takes hold.  The market is suggesting not – it is suggesting a return to what was – so I guess we’ll see…..

Oil is up $1 or 2.17% – at $36.48/barrel…..getting ready to kiss the intermediate trend-line at $38.02 – a level that I think will provide some resistance (understand that the trend-line was at $39 barrel, but as each day passes – the moving average does change – currently what was a trend-line at $39 is now the trend-line at $38). OPEC is due to meet this week to discuss continued production cuts to manage the supply chain and as the world re-opens we can expect demand to surge…..and while we remain in the $30/$38 range for now as the world – as the world re-opens and demand surges I suspect it will push up and through to find  equilibrium in the $38/$45 range at the height of summer.

Veterans across America will hear from a team of financial experts, thought leaders and small business advisors as they provide practical advice, solutions and guidance to help veterans find their financial way forward and during this virus pandemic.

Go to: Veterans.cnbc.com to register. 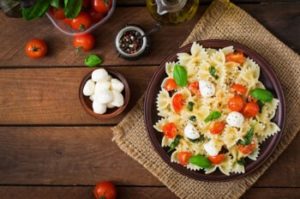 This is a great summer time dish and easy to make. It can be a main course or a side dish to a summer BBQ.  It is better served hot, but can eat it at room temp – it is very versatile and looks great when presented on a striking white dish.

Essentially – you are making a summer tomato salad and then putting it over pasta….so Dice the tomatoes, slice the red onion, slice the garlic, add chopped basil, chunks of fresh Mozz, s&p, and a couple turns of olive oil.   (you can also add a bit of Oregano – but not too much)  try it first without….

Prepare and let it sit out and marinate.  It will create its own juice the longer it sits.  You want it to be room temp when you mix it with the pasta.  If you make it the day before then remove from fridge and let warm up for about 30 mins…..

Now bring a pot of  salted water to a rolling boil – add pasta and cook for 8 / 10 mins….or until aldente.  Strain – always reserving a mugful of water…..return the pasta to the pot – add back 1/4 mug of water to re-moisten.

Toss – wait a min or two so that the pasta absorbs the water…you do not want a puddle of water in the bottom of the pan.  Now add the tomato salad, 2 or 3 handfuls of grated cheese and toss well.  Serve immediately in warmed bowls.  Again – set the table outside, turn on some relaxing music to set the mood, light the candles and enjoy the setting sun on a great summer eve.   Never rush – enjoy the moment