FOMO is Driving the Market- try the Summer Risotto

FOMO – Fear of Missing Out – that is what drove stocks higher yesterday… because as the lockdown restrictions ease and infection rates remain stable and Goldman Sachs screams that the market can only go higher – global investors are realizing that the worst is over – both in terms of the virus and in terms of the market’s reaction. The reality is that the pullback that so many expected isn’t going to happen any time soon… and stocks continue to move higher as the algo’s can’t find any negative piece of macro-economic data to focus on.

Let me clarify – Yes – they can find it and yes, the data is weak and yes the data is even worse than it was during the Great Financial Crisis of 2007-2012 – but the difference is that the data today that we are experiencing was imposed upon us, sending the country into a coma – we were healthy before this happened – and so the sense is that as more and more states re-open and life returns to a new normal then the economy will return to a new normal as well. And that argument has fueled the advance off the lows of March as investors look to put money to work. And as the market goes higher, investors that have been waiting for the selloff – realize that the selloff isn’t coming (right now) and they jump in for Fear of Missing Out… only sending the market higher… By the end of the day – the Dow added 267 pts or 1%, the S&P rose 25 pts or 0.8%, the Nasdaq rose 56 pts or 0.6% and the Russell tacked on 12 pts or 0.9%.

The selloff that some of the big guys tried to create in May – has failed to materialize… I mean, recall how Buffet made this huge announcement on May 2nd about how he unloaded his 4 airline positions after they had already sold off some 70% or so – with Scott Wapner on tv asking “How can anyone buy an airline stock knowing that the master has tapped out”… a quick peek reveals that since that announcement the airlines have risen 30+% and the broader market is up 9%… and while Warren doesn’t care – what would Scotty say to all those people that have since bought airline stocks?

And on Tuesday, May 12th – Stan Druckenmiller commented on how overvalued the market was – saying –  “the risk-reward for equity is maybe as bad as I’ve seen it in my career,” followed by Davey Tepper who echoed those comments and the list goes on… many criticized them for “talking their books” the way that Billy Ackman did in late March – after he got on CNBC and cried about how the market was going to crash – and when the headlines hit the tape – the algo’s went into overdrive spinning the market out of control… and as the market came under pressure that day – Billy was busy buying back short positions and going long – a move that was revealed only days later when a story hit the tape about how he just happened to make some $2 billion in the stock market while he was crying on TV. I mean – it’s comical really…

Either way – it is what it is… even the recent social unrest in the states has failed to cause market panic. It has caused social panic and a social awakening – which in the end is a good thing – but it has not caused widespread market panic and so we move ahead…

This morning, stocks around the world are all up strong (again), car sales surging, online sales surging, countries re-opening while re-infection rates remain low… and guess what?  Our friends at Goldman have reversed their fairly “bearish” position – oh boy, now that’s a surprise – and are going “cautiously optimistic” – which now means that we must be at the top… I mean talk about a contrarian indicator…

Let’s see – here’s the latest insight – Economic activity in re-opened states is better than expected, no surge in re-infections either… and NY and NJ appear to be in much better shape… the ongoing conflict with China appears to be more bark than bite… and so they are out pounding the table on their “new bullish view” creating lots of trading activity for them from their clients… But they do hedge themselves – telling those same investors that while they are cautiously bullish – a new fall outbreak, or production increases in oil could derail this view… and let’s not forget about the TRILLIONS of dollars in new debt and stimulus that we have saddled the country with for years and never mind the idea that it will take more than a decade to really recover… and if the Democrats take control of the executive branch in November – then expect massive tax increases across the board… Which brings up the next issue: Shouldn’t we be hearing from the Democrats right now about who else is on the ticket? Thoughts? Harris? Abrams? Klobuchar? Ocasio-Cortez? Now if they were smart – the announcement should come at any moment if they want to seize the day and the opportunity.

US futures are up big again… Dow futures adding 212 pts or 0.8%, S&P’s up 18 or 0.5%, the Nasdaq adding 45 pts or 0.47% and the Russell is adding 13 pts or 1.09%. The story continues, the conversations become more mainstream and while the protests continue the violence is subsiding… and that is good.

Dr. Fauci coming out and reminding us that any vaccine created will  not have any long term durability – it will not be a one and done type of vaccine – which brings up the idea that this is here to stay and that any vaccine created will be like the flu vaccine – a yearly event. CNBC is running with the idea that all of the protests will do nothing but spread the virus and Dr. Gottlieb is telling us to expect a surge in cases in the next 2 weeks as the virus makes its way thru the crowds. I’m curious what he will say if that doesn’t happen? Let’s check in on 17th… to see what the results are.

In the end – despite the long list of issues that could derail the market – they are not. The market right now is focused on one thing – the re-start of the global economy – and then once that happens – reality will set in and the focus will turn to that long list of issues we have been discussing. So – this is not the time to sit back and relax – it is a time to rebalance, stay focused and plan for the future.

Global markets are also continuing to surge… Asian markets responding to the ongoing re-opening… Stocks in South Korea jumping 3% as the excitement builds and the country unveiled a $29 billion budget raising the total stimulus to record levels as they too fight the battle. Talk of China/Hong Kong disruption dissipating.  As the sun set – Japan was up 1.3%, Hong Kong +1.4%, China was flat and the ASX added 1.8%.

Oil rallied 4% yesterday – taking this “black gold” up $1.38 to $36.84 inching ever closer to the intermediate trendline at $37.81 – a level that I think will provide some resistance. As I said yesterday, OPEC is due to discuss continued production cuts to manage the supply chain and as the world re-opens we can expect demand to surge and when that happens – expect to see oil shoot up and thru trendline resistance… heading toward the final frontier… long-term trendline resistance at $46.30! (Which is another 27% up from here!) … and while we remain in the $30/$38 range for now – my sense is that we are about to break out… you can feel the pent-up demand building – overnight WTI traded as high as $38.18 – capisce? It broke thru the intermediate trendline before backing off – giving it all back and now trading at $36.80. When the world re-opens and demand surges I suspect it will push up and through to find equilibrium in the $38/$45 range at the height of summer and if OPEC and Russia extend production cuts thru the fall and the economy surges then it’s anyone’s guess…

The S&P closed at 3080 – again right on the highs… remaining well above trendline support at 3002… and with this morning’s action – we can expect the S&P to challenge 3100 before the bell even stops ringing… Now remember – 3100 is not a trendline resistance level, but it is a psychological level… a move up and through should cause the algo’s to take the S&P to the March highs of 3130. Stay tuned… 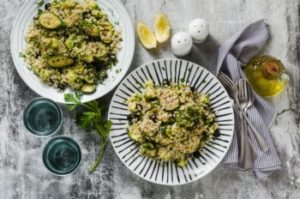 It’s all about the fresh summer veggies that make this dish so great.  A range of green/yellow veggies add depth and great flavor – give it a try, won’t you?

For risotto you need some basics……Arborio rice, some white wine, chicken stock, fresh grated parmegiana cheese, Vidalia onion, butter and a splash of olive oil.  In addition – you need some of your favorite green veggies… peas, asparagus tips, leeks, baby zucchini both yellow and green (yellow complements the green -sliced lengthwise and sautéed quickly) and artichoke hearts… you can even add cut, blanched broccolini.

Begin by sautéing the Vidalia onion, and the chopped leeks in a bit of butter and splash of olive oil… now add in the rice and stir until coated.  Next add about 1/2 cup of white wine and allow it to absorb.  Next as usual – add one ladle of hot chicken stock and stir…until almost absorbed… repeat and repeat again…until the chicken stock is absorbed.  Taste for doneness – when ready – add the peas, asparagus, artichokes, zucchini, broccolini (if you used it) stir to mix so that the veggies heat up…..add in a ‘squeeze’ of lemon juice (not too much) and the fresh grated cheese….. Serve as a starter or as a side dish… either way – it is a celebration of summer.