The Explosion Continues…Try the Drunken Spaghetti 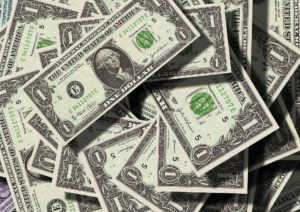 And the explosion continues… ADP employment report showing only 2.7 mil job losses in the last month and while that sounds ridiculous to say – put it in perspective – the market was expecting that report to show job losses of 9 mil – so 2.7 mil ain’t so bad! In addition, the ISM Non-Manufacturing report came in at 45.4 – still in contraction mode – well below the 50 line, but better than the expected 44 and a vast improvement over last month’s read of 41.8.  Now Factory orders and Durable goods came in as expected – which were still fairly negative – but then weren’t more negative than expected – so BOOOMMMM it’s off to the races… What started out strong ended even stronger as the Dow added 527 pts or 2%, The S&P rose by 42 pts or 1.3%, The Nasdaq falling just short of establishing a new high… That’s right – the Nasdaq added 74 pts or 1.3% leaving it just 1% below its February 19th all-time closing high of 9817 and the Russell – as usual added 38 pts or 2.7% – there goes that outperformance again… Look what all of this broader action is telling us is that is that investors are confident in not only the markets but also in the fact that the global economy can rebound from this.

Yesterday we had two things happen – the S&P surged up and through another century mark – 3100 … Remember what I said in yesterday’s note:

“The S&P closed at 3080 – again right on the highs….  remaining well above trendline support at 3002……and with this morning’s action – we can expect the S&P to challenge 3100 before the bell even stops ringing… Now remember – 3100 is not a trendline resistance level, but it is a psychological level.  – a move up and through should cause the algo’s to take the S&P to the March highs of 3130”.

And then – the Dow also finally pierced its long term 200 day moving average and that just helped to light the fuse – as tactical money usually holds out until it gets a ‘technical signal’ and now that money can get put to work.  You see – there are some strategies that get elected when the indexes send technical buys or technical sells – in this case – the Dow finally pierced its long term moving average send that exact signal… – and BOOM… up we go.

As we have been discussing – money is moving into the value plays… Industrials XLI +3.9%, Financials XLF + 3.7%, Real estate IYR +3%, Energy +2.9%, Basic Materials IYM +2.2% all leading the way higher… and this makes sense for two reasons… 1. They were under pressure and are playing catchup and 2. If the global economy wakes up – then all of this makes sense as all of these sectors will benefit in a return to business.

So what’s next? Can the market continue to push ahead? Yes it can, but it’s ok to take a break and that is what we are seeing today… US futures are set for a pullback… and no one should be surprised. At 6 am – Dow futures are down 175 pts, the S&P’s are off 18 pts, the Nasdaq is off by 32 pts and the Russell is down 20 pts.

There wasn’t anything specific – the news is still the same, macro data is weak, the global pandemic – which while not as virulent as it was 2 months ago – is still an issue for the world and how the world wakes up and how fast it wakes up remains a hot topic. Will the world suffer a second wave and if so – what happens then? Will we get a vaccine and if so, when?

Look – the Dow has added 15% since May 14th, the S&P is up 12%, the Nasdaq is up 10% and the Russell has added a whopping 20% all in 3 weeks… so do you think it would be out of line if it consolidates? I mean let me remind you that 40 million people are still out work and that GDP is expected to plunge into double digits and all of the other macro-data details remain well in negative territory – and the market is kissing new highs?  For many – that makes no sense until you consider the role of the FED and the other central banks that have added so much Kool Aid to the system – reminding us that ‘you can’t fight the FED’. And do not discount all of the automated and algorithmic trading systems that whip the market around coupled with the explosion of passive ETF’s which has changed the way the market trades. And as good as this all feels – remember it, because as fast as it surged, it can collapse and if we suddenly get that surge in re-infections that so many are worried about – either now or in the fall –  and we continue to get mixed results on a treatment or vaccine all of this euphoria could evaporate and take the market with it.

Yesterday, the administration selected 5 drug companies that are the furthest along in developing a vaccine – hoping to accelerate a cure.  Moderna, JNJ, Merck Astra Zeneca & Pfizer are all in the mix, which puts a bit more pressure on the ones not selected as the push and focus is now squarely on these companies. So the race is on and September is only 3 months away. So once again it is time to talk to you advisor to create a portfolio that will weather a downturn while allowing any advance to run.

Eco data today includes – Initial Jobless Claims – exp of 1.8 mil more people hitting the roles, and Continuing Claims of more than 20 mil people are expected. Tomorrow brings Non-Farm Payrolls – exp of 8 mil more job losses – but remember yesterday’s ADP report was not as bad as expected – so we might be surprised.

Oil which has been soaring recently is also taking a breather… falling 1.5% or 58 cts a barrel as we get ready for the OPEC meeting in Austria.  Word is that OPEC (Saudi’s) may run into trouble getting the other nations to agree to extend production cuts thru July… You see – the Saudi’s, Kuwait and the UAE (United Arab Emirates) will not agree to continued cuts IF other countries (Iraq and Nigeria) continue to fail to comply with the cuts – suggesting that production could rise in the next two months putting pressure on prices.  In addition, an EIA reports that gasoline inventories rose by 2.8 mil barrels or 3x the expectation while distillate inventories rose more than 4x the expectation.  I think this is all bluster and that as supply and demand come into balance and the world re-opens demand will surge.

We remain in the $30/$38 range for now – my sense is that we are about to break out… you can feel the pent-up demand building – but at this point anything can happen.

The S&P closed at 3122 – again right on the highs… remaining well above trendline support at 3005… but a pullback would be welcomed, and truth be told – support would be at that trendline. I don’t expect it to go there today, but I do the path of least resistance right now is lower – giving the market and investors a chance to digest the recent surge. 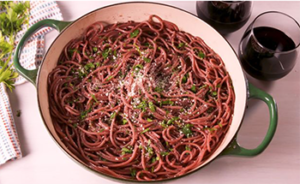 So you ask – drunken spaghetti? How so?  Well – you cook it in water and red wine – a nice Chianti or “vino di tavola” (table wine). No need to use an expensive red – go out and buy a chianti. The trick is that you add equal parts of water and wine – bring to a boil and add the pasta – cook for 7 mins and then strain – reserving a mugful of water/wine. You then finish it off by sautéing in a pan with butter, garlic, pancetta and &frac12; cup more of the wine… read on…

You need – a nice chianti, garlic, butter, spaghetti (you can use fusilli, linguine, bucatini, capellini but it should be a long pasta – not a penne or mostacioli, ravioli etc.), olive oil, chopped parsley, pancetta and red pepper flakes (optional).

Add equal parts water and red wine to pot and bring to a boil.  Add salt.  Add pasta. Cook until al dente – like 7 mins or so.

In the meantime, peel the garlic and slice it. – chop some pancetta.   Place the butter and olive oil in a sauté pan large enough to fit the pasta and place it over low heat to slowly melt the butter.  Now add the pancetta and cook just until almost crispy… now add in the chopped garlic. Sauté. (here is where you would add the red pepper flakes if you choose)

When the garlic gets toasty add the additional &frac12; cup of red wine and about &frac14; cup of pasta water… turn up the heat until the liquid simmers. Strain the pasta – reserving a mugful of water… toss the pasta into the sauté pan with the garlic & wine.  Mix well, tossing and stirring over med hi heat until the liquid is absorbed.  Do not let it “dry out” … you can always add a bit more of the water if it does. Taste. Good?

Serve immediately in warmed bowls….be sure to have plenty of Pecorino Romano cheese on the table…