I mean let’s be honest… should the market just continue to surge in the face of all this uncertainty? Clearly not. Remember what I said about how the tone can change depending on the headline that they choose to run with… and yesterday the headlines were not good. Negative commentary out of the Int’l Monetary Fund, travel restrictions between 3 northern states vs. the ‘hotspots’ and finally speculation that the Democrats are going to crush Trump and the Republican party in November – taking not only the White House but the Senate as well (they already have the House).

The IMF (Int’l Monetary Fund) slashes forecasts – again. In the latest World Economic Outlook – the IMF reveals that the pandemic has had a ‘more negative impact’ than anticipated. The piece – titled “Crisis Like No Other, An Uncertain Recovery” – lays it out in simple language… in it, they make it clear that it is almost impossible to make realistic projections because there is ‘higher-than-usual degree of uncertainty around any forecast and that the baseline projections rest on ‘key assumptions about the pandemic – The recovery is now projected to be slower than previously forecast – again not really new news… and this latest forecast is decidedly more bearish than comments made in April. The IMF now expects global GDP to fall by 4.9% vs. the 3% they projected just 2 months ago. In the end – it was not what you would call a ‘bullish report’ at all. And so – the algos went into overdrive – sucking everything down the drain with it.

Then at around noon – the Democratic governors from NY, NJ, and CT all got together and held a press conference announcing a ‘Joint Travel Advisory’ – ordering all visitors from ‘hotspot states’ to be quarantined for 14 days upon arrival to any one of the 3 states. Hotspot states now include: AL, AK, AZ, FL, NC, SC, UT, TX and those can change as the data changes. Cuomo made it clear that if people don’t voluntarily quarantine and get caught then they will be fined $2k the first time, $5k the second time and up to $10k if they cause harm. He also made it clear that the gov’t knows exactly who you are, when you arrived and how to contact you. Airline records with all the contact info are being made available to authorities so ‘don’t lie’. So, if someone knocks on your door and you’re not home – get ready… and this was just another headline/story that was interpreted as negative by the algos on a day that was accentuating everything negative… I think it was the part about how the airlines are making all the data available to anyone that wants to see it… Not sure – just a thought. The airline ETF – JETS collapsing by 5.88%.

And then there is the speculation that Biden’s lead over Trump could mean a clean sweep in the halls of congress… and THAT is a game changer… Why? Because – Biden has caved to the far left. He has made it clear that his tax plan includes rolling back the corporate tax cuts, raising individual tax rates across the board, tearing apart the tech, financial and energy sectors, all while increasing funding to social programs that encourage people not to work. (think Sanders/AOC/Warren). In the end – if this is true – then the market is telling us that a Biden presidency accompanied by a clean sweep of congress is a huge negative for the country and the markets. Now if Biden wins and keeps the house but loses the senate – then its less of an issue as the markets will recognize that there is some level of checks and balances.

In the end – all of this news was not seen as positive (at least for yesterday – because it wasn’t bothering anyone the week before as the market surged). All of the thoughts of an improving economy suddenly got dashed and this was too much for the algos to understand… so once again they light the place on fire. But don’t despair – the FED is alive and well and with the ability to just keep printing money – the bottom can’t possibly fall out! (said with a note of sarcasm – because at some point all the money in the world will not be able to stop the avalanche…)

In the end – my guess is that it was just a shakedown… a test of wills of sorts… because what did we learn yesterday that was really new? In my opinion – nothing – but the market did need a reason to back off… Next – it is now almost July… and that does mean that there is only 4 full months left before we go to the polls… so get ready because the daily headlines concerning the election will clearly begin to create new volatility. Who Biden picks will be very important – I mean really important… so let’s just wait to see what’s next.

Asian stocks began the day weaker and ended the day a bit weaker – China and Hong Kong closed for a holiday so that left Japan – 1.22%, ASX – 2.5%, Kospi (South Korea) – 2.27% & the STI (Singapore) fell 1.5%. Investors there getting a chance to react to the latest IMF report, the latest virus reports and the speculation surrounding the Presidential election… Any one of those headlines had the ability to create a stir but it was the IMF report that they mostly focused on… not to concerned about how the virus is ‘tearing through the US’.

Eco data today includes:  Retail Sales Inventories exp of -2.8%, Durable Goods now that is expected to be +10% which is in contrast to last months -17.7% – so keep your eyes on this data point. Durables EX transports of +2.2% vs. -7.7% last month. GDP for the 1Q final revision is expected to be -5 (no change from prior estimate). Initial Jobless Claims of another 1.33 million people with Continuing Claims of 20 million people still on the payroll. And with all the talk of a surge – both these numbers will be keenly watched. Look – the markets and investors/traders and algos are all caught in the cross fire between the virus, the global outlook and now the Presidential election… each one of those issues alone is enough to cause some angst, but when they converge – it sets off a round of fireworks that ignites the volatility so strap in… and stay awake…

US futures this morning are mixed… and that is a positive… At 6 am – Dow futures are lower by 66 pts, S&P’s are off by 7, the Nasdaq is up by 20 pts and the Russell is off by 5 pts. Now expect to hear more about initial jobless claims, rising rates, surging cases and possible closures of bars, restaurants and other businesses in those ‘hot spot’ states. Do not expect to hear anything about another national lockdown – I think the administration has made that clear.

And as you would expect – Oil goes lower… and why not? The news continues to hammer the global economy taking oil with it… but not to worry – WTI is now trading at $37.60 – as profit taking is the name of the game vs any real expectation that demand will drop… in the face of negative news – the trader types will take money off the table after the big surge higher in the last couple of weeks. In the end though, everyone expects demand and production cuts to take control and support oil within the $36/$45.50 trading range.

Yesterday’s move took the S&P to 3032… before they tried to rally it back. Depending on what today’s headlines say and what the eco data reports will dictate the next move… Will Initial jobless claims disappoint? Will the headlines get more hysterical? 3020 is within sight… and if they push it there and fail then it’s back to the 2900’s! But remember – The recent uptick in cases is causing angst, but that uptick is not being met with a surge in deaths… and that is what the focus should be. 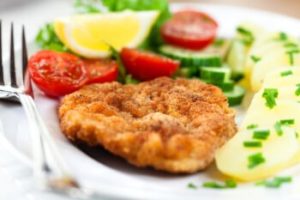 You start by making the Tomato Bruschetta – get some nice ripe plum tomatoes – maybe 7 or 8… dice and add to a glass bowl… 3 or 4 cloves of garlic… now crush two of them and then slice the other two – add to bowl… fresh basil – chopped, s&p, olive oil and diced red onion… (I love red onions so the more the merrier – but you figure it out…) – cover and let marinate… do not refrigerate…

Next the Pork Cutlets – Rinse the pork cutlet – (off the bone) and pat dry. Beat a couple of eggs and set aside. Prepare a bowl with Italian seasoned homemade breadcrumbs – set aside. Place olive oil in a broiling pan and turn broiler on high… place the rack on the second level below the broiler. Dip the pork in the egg wash and then dredge in the homemade breadcrumbs making sure to coat well on all sides. When the oil is hot – place the cutlet in the broiler pan and turn over so that the seared breadcrumbs are now under the broiler. Cook for about 5 mins or until a nice golden brown. Flip the cutlet and broil the other side – another 4 / 5 mins or so. Remove.

Now the presentation… You need to make a bed of greens on the plate – maybe fresh spinach, or arugula, or Boston bib – you can mix or use just one… Next place the broiled cutlet on top in the middle – looks good no?

Serve with a red wine of your choosing… I like a Chianti Classico with dish – but you can choose whatever makes you happy.