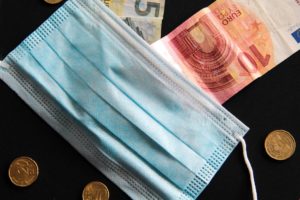 Stocks started the day weaker again yesterday – following the path created on Wednesday… hitting their lows at about 9:48 am… before finding their footing and stabilizing… And where was that? S&P 3024… just at the trendline that I had identified in this note two days ago – when this latest round of selling pressure took hold. It appeared almost textbook like – the markets suffering a bout of selling as the surging virus cases continue to steal the headlines… talk of slowing down re-openings across the nation are now the norm – with TX being the first state to pull back. Confusion over whether or not the federal gov’t would force another nationwide shutdown has been part of the reason for the added uncertainty – but the administration assures us that that is not the case. The next act will be played out by the individual states and not dictated by the administration – or at least that is the headline now. By the end of the day – the Dow added 300 pts or 1.18%, the SP was up 33 pts or 1.1%, the Nasdaq surged by 107 pts or 1.09% and the Russell added 23 pts or 1.7%.

Let’s be clear – if we get another national lockdown – that brings this country to its knees again  – the idea of ‘de-risking’ will take on a whole new meaning… but I do not think that will be the case – unless this spread or the number of cases continues to surge at such speeds that the healthcare system once again gets overwhelmed… what is unclear in many of the reports is – how many of the new diagnosed cases are causing long stay hospitalizations? When they talk about the rise in cases, are they saying that every one of these cases is admitted to a hospital? (hardly)… Or are these cases being diagnosed, treated and sent home to recover because the extent of the infection is not ‘life or death’?

I mean we see the lines of people driving up in cars at these pop-up testing centers to be tested – that’s good, but here is my question… If you have it bad and you can’t breathe and your fever is spiking – then you are NOT one of those people sitting in your car waiting in line for someone to stick a Q-Tip up your nose for a result. The CDC reports that the latest hospitalization rate is 94.5 people hospitalized per 100,000 people tested and the highest rates are in the +65 demographic – a demographic that usually have other underlying issues that affect their health. And they also report that the mortality rate from: Pneumonia, Influenza &  Covid-19 (PIC) has dropped to 7.1% – and notice that is not just from Covid19… so again let’s be careful how we manipulate the data – because like economic data – you can always frame it to tell ‘your side of the story’ and the market will decide if it believes it or not… and that can change as Tuesday turns to Wednesday and then again as Wednesday turns to Thursday.

Economic data from yesterday was mixed at best… with Retail Inventories falling 6.1% vs the expected -2%. Durable goods though was stronger than expected at +15.8% vs. the +10.5% expected… GDP was not a surprise at -5% and Initial Jobless Claims did tick UP a bit over what we expected coming in at 1.48 mil, vs. the expected 1.32 mil. And that is exactly the issue – Initial jobless claims went up (should be a negative right?), but yesterday they chose to ignore it… explained it away as ‘not so important’ this week… there are other things to consider… and so we move on…

Next up – VZ is the latest company to pull advertising from Facebook/Instagram – joining a growing number of companies boycotting the social media giant for the way it handles ‘hate speech, harassment and misinformation’ that ends up inciting violence saying that

“We have strict content policies in place and have zero tolerance when they are breached, we take action.”

I would imagine that investors will cheer this move and reward VZ for standing up and doing what’s right. Facebook – on the other hand should not be so lucky… It should force a wakeup call that FB has a ‘social responsibility’ to do what’s right as well… Now this morning’s WSJ runs with this headline –

– saying that while they take civil rights concerns seriously – “they will not be forced to make policy changes that are tied to revenue pressure”… OK – great – let’s see how long that lasts once more companies jump on that bandwagon and tell Zucky to sit down and shut up.

And the FED released the latest data on the bank stress tests… saying that while US banks are strong enough to withstand this current crisis, they did find several that could come close to their minimum capital levels if this crisis continues longer than expected… so they have ordered all the banks to cap dividends at current levels and suspend share buybacks into the 3rd qtr to conserve funds. Additionally – the FED is requiring the banks to resubmit “updated capital plans later this year to reflect current stresses.” In the end that should be seen as positive – but let’s see how the algos respond to this headline as the day begins.

Overnight – stocks in Asia were mostly higher – as investors there chose to not get worked up about surging virus cases in the US or about the latest FED bank stress test results. Japan + 1.1%, South Korea Kospi +1%, ASX jumping 1.5% while Hong Kong fell 0.9%. China again closed for a holiday.

In Europe – markets there are all higher… again – they too are ignoring the surge in US virus cases and possible closures… as well as the warnings from the IMF about a second wave of a meltdown due to the economic impact of the virus on the global economy if a second round of shutdowns becomes a reality. There is no eco data to speak of – but rather more drama around individual companies… Wirecard continues to top the list as they filed for ‘insolvency’ on Thursday – unable to account for some $2 billion that has gone missing off its balance sheet… and Lufthansa (German airline) is getting a $10 billion rescue package from the gov’t while Air France – KLM is getting a $3 billion rescue package from the Dutch gov’t as both of these airlines continue to get beaten up by travel restrictions imposed upon them by the virus.  As of 6:30 am the FTSE+1.56%, CAC 40 +1.72%, DAX +1.09%, EUROSTOXX +1.38%, SPAIN +0.73% AND ITALY +1.38%.

This morning US futures are all over the place… as they try to decipher the overnight action and the latest headlines in the US. Dow futures are down 50 pts, S&P’s are up 3 pts, the Nasdaq is up 20 pts and the Russell is off by 2 pts. It appears that US investors are not sure how to interpret the bank stress test results… while they appear to be withstanding the crisis – some analysts are now complaining about the fact that banks must keep dividend payments where they are and that they must continue to suspend share repurchase programs into the 3rd qtr. Comments by FED Vice Chair – Randy Quarles appearing to add to the uncertainty.

“While I expect banks will continue to manage their capital actions and liquidity risk prudently and in support of the real economy, there is material uncertainty about the trajectory of the economic recovery”

I guess it is the ‘material uncertainty’ that the algos are focusing on… and while the banks did have a good day yesterday – most of them fell in after-hours trading when this story hit… JPM which gained 3.5% during the day gave back 1.8%, GS had gained 4.5% and then gave back 3.4%, WFC had gained 4.7% and gave back 3%, BAC had gained 3.8% and gave back 2.4%… so let’s see what they do today once regular trading gets under way.

Eco data today includes: Personal Income and Personal spending…exp of -6% and +9.2% respectively. While these will be of interest – do not expect them to be real market movers unless they are materially different from the expectation.

Oil – is up 23 cts at $38.95 – holding well within the $36.50/$45 range… all of the angst of the last couple of days has caused oil to come under pressure as the whole declining demand story tried to take root… but that has all changed overnight… apparently there is growing optimism about a recovery in worldwide demand DESPITE the surge in virus cases in the US – go figure! Additionally – some US producers are increasing production ahead of what they expect to be more demand in the coming months. Satellite data – which is showing more car, truck and air traffic in Asia, Europe and the US all pointing to – guess what? An increase in demand! Bingo!

S&P closed at 3083 after having tested as low as 3024… the action of late does appear as if the market wants to test lower to see where the demand is… yesterday it was at the trendline… and my gut tells me that 3020 is fairly substantial support for now. Remember – today is the semi-annual Russel Rebalance… expect lots of action and volume in stocks that are affected by these new calculations… in the end – it is not an indicator of expectations – it is exactly what it says – a rebalance of the index due to price moves over the past 6 months. The same way you would re-balance your own portfolio when it gets out of whack due to price action. And then next Tuesday is the last day of the quarter and the first half of the year… so expect some window dressing as well and that will surely start today. 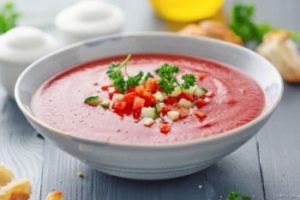 This a great summertime cold soup that originated in the Southern region of Spain known as Andalusia. The theory is that it came to Spain via the Moors or even the Romans – either way – it is now a traditional Andalusian dish. For this you will need:

Roughly chop the cucumbers, bell peppers, tomatoes, and red onions into 1-inch cubes. Put each vegetable separately into the Cuisinart and pulse until it is coarsely chopped. Do not over process or you will create mush.

After each vegetable is processed, combine them in a large bowl and add the garlic, tomato juice, vinegar, olive oil, season with s&p. Mix well place in the fridge and chill. The longer the gazpacho sits, the more the flavors develop.